Down The MineView game page 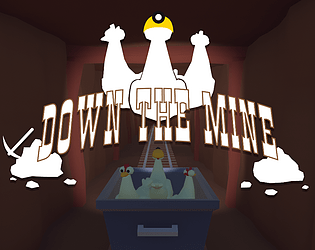 Down The Mine's itch.io page

Wow, very nice and well polished game there! Managed to take the third palce with 6155 and thought it was good enough =D

I liked :
- The Felling! With the speed increase, it became so intense I often realised post-mortem I was in apnea while playing ^^
- The toon-y graphics
- The music, very fitting
- The character design. Chickens? Brilliant.

What I think could be better :
- Not much... Maybe make the coins pop at a regular pace ? I often found that I was building speed non-proportionnally to my score, because coins didn't want to appear often. It create a little bit of unfairness
- The tilting animation is a bit slow, it seems that the game only look if the key is pressed to dodge obstacles, but my eyes tells me that "i'm not yet fully tilted". Or worse : I often released the key thinking "I can anticipate it a little, it takes time for the cart to go back down" and instead hurted myself on the rocks under me.
- The "up" (all key released) position is useless =)