Submitted by iammniklas — 8 minutes, 26 seconds before the deadline
Add to collection 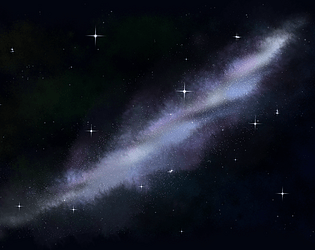 At first, let me tell how nice the transition from the menu looks. I clicked on play and was pretty surprised. This looked really cool. There're a couple things that could improve the overall feeling of the game. At first I wondered if I could even hit the enemies. A small explosion or another form of impact would be pretty great. Also I had a problem to distinguish the powerups from the enemies. I thought they where just fancy spaceships until I crashed into one. But the powerups are really nice. They're simple and not over complicated. Depending on what enemy kills me, I get "stuck". I'm respawning and being destroyed as soon as I can move again. Would be great if you could move while you're still invulnerable. I think most enemy shots are way too fast. It happend very often that I couldn't dodge them or I was already dead before I even realized the shot. After some tweaking this could be a great and basic (I really like basic ones) shmup ^-^