god is a ghostView game page

A first person exploration game in a procedurally generated world, search for answers to spiritual questions and die.
Submitted by owenribbit (@owenribbit) — 1 day, 2 hours before the deadline
Add to collection 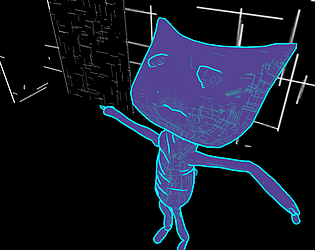 Play god is a ghost

god is a ghost's itch.io page

I ended up playing this last night for a pretty extensive time when checking out the Procjam games from this year, and I absolutely love it. There are so many really interesting things about this game, and yet I found myself also a little let down and frustrated because I wasn't able to figure out if there WAS anything more to figure out in the game than what I found.

I really love the visuals, the atmosphere, the text-to-speech, and the weirdness. I brought out pen and paper trying to see if I could work out the word-cipher from the plaques on the walls, since all nearby NPCs read the words in the same way, despite saying completely different things normally. But I was left feeling frustrated because of the Pink Jellyfish. Not only is it incredibly hard on the eyes, making the screen essentially flash rapidly for a long time when you get caught, it's nigh-on impossible to get away from unless you manage to rush up a building and jump across the rooftops. Even if you get away from it, it'll amount to nothing because it also kills all the NPCs, so you can no longer get any information from the plaques. All of this would still be fine if the symbol cipher didn't apparently shuffle every life/run.

Maybe I'm reaching for substance where there is none, but since the characters read the words the same way, I had the idea to learn what each symbol meant, then use that knowledge either in the Guru Tower after you die, or in the Sun place. The basement there had all those symbols spread out with a talking toilet in the center. At first I thought the toilet just repeated the same line over and over, which could've meant that something would happen if you could touch/click the correct translated symbols in order, but after listening more to the toilet and the characters they seemed to just be saying random lines.

It would've been incredible if it all lead to something in the end, and if the Pink Jellyfish wasn't as frustrating both mechanically and visually. All in all I still love the game, but I wonder if I'm missing out on something. I ended up streaming my playthrough of it on Twitch. It's also on my Youtube in case you care to see what my experience was like, I'm sure you can find it.

hi shilag, thanks for your comments, it's been a while since i made this game, so it was nice to revisit the game.  and i really appreciate the feedback and depth that you went into the game.  i feel like there are definitely some flaws to this game and it could use a revision if i ever have time to get back into it.

anyway, since you expressed frustration over the meaning of the game and it's relationship to the symbols, i wanted to give you a little insight into what it is, although it may not be the most satisfying answer.  i'm reading through code and notes actually to try to remember exactly what i was thinking at the time.

basically, in the fictional universe of the game, the orange and green characters are part of different sort of cult/religious sects, one for each moon in the game. they interpret the symbols differently, so all the green characters will read a text one way, orange characters another way.  you have to compare the symbols across readings, which probably takes more time than its worth.  there are 26 symbols and if you read them in order they form the sort of mantra of each sect.  the main thing is that the green characters interpret the first symbol to mean "god" and the last symbol to mean "end",  while the orange character interpret those same symbols as "ghost" and "beginning".  it's... a little over wrought.  watching your play through i'm realizing there's a lot of ways i could have made that connection more obvious.

when i was testing the game i think only one other person actually thought to try to figure out the meaning of individual symbols, so as i worked on it i kind of abandoned the idea that the symbols needed to be translated in order to progress, as it was in early versions.  in the current version, you basically just get to interact with the two different groups and then when you die you choose the afterlife that you want, by clicking the green moon or the orange moon.  that's the "payoff" i guess of the game?  those two scenes at the end.  i thought they were kind of fun but i realize they don't read as like a dramatic ending.  i mean, i thought the talking toilet would be a satisfying ending on it's own!

the other thing that may not be obvious is that you have to die to "win" the game.  if you want to you can stay alive for a long time, but then everyone else will be dead and there's no reason to be there.  everything is randomized to a certain extent, but there are basically three levels and each progressively has a bigger world but the ghost/god is better at catching the player.

i definitely think those ideas/game mechanics are not like super obvious.  i think i was okay with the game just being a weird experience because i felt it was visually interesting enough, but its for sure not my goal for it to feel frustrating.  i thought about ways of allowing the user to kind of accumulate the poem to make it a bit more obvious (one version of the game included a notebook that the player avatar would take out and write down the symbols as they learned them) but in testing it felt like those mechanics made it feel to much like a scavenger hunt, the experience i was going for was more one where you were like genuinely freaked out by the god/ghost which i felt like was more effective when there was less going on.  also i feel bad about the death animation, that definitely could have been smoother lol.

playing it again now i realize i really prioritized minimalism to an extreme degree, like there could definitely be more furniture in those rooms.  it would be fun to update this with some of these thoughts in mind.   and as far as the overall meaning for the game, its basically just about conflicting concepts of god/the afterlife, and how there isn't really an answer!

thanks again for your feedback!

Wow, I'm so happy you replied. I didn't even know if you'd still be able to see this lone comment left on a three year old game. I might've come off as a bit more frustrated in the comment than I really was. I definitely didn't find the experience of the game frustrating as a whole, if I did I wouldn't have wanted to dig into it at all. The frustration mainly came from not knowing if there WAS anything more to dig into, and your reply answered more or less every single question I had, so thank you very much!

I completely misinterpreted the green/orange dynamic. I think I had NPCs of the same colour read the same note, but then when I died I had the other colour read another note and my understanding of the symbols didn't line up. That's why I thought it randomized on every single death, which would've made it almost impossible to piece together the entire thing. Knowing that it's persistent makes the ghost much less frustrating, since you'd still be making some headway repeating the lives over and over. Though like you said, a change to the death animation would've been welcome.

It sounds like an interesting idea to have an in-game notebook to make progression easier, but I agree that it probably doesn't fit the tone of the game. Obviously I don't know the full intent behind everything you put into the game, but I very much like the minimalism and weirdness, and that there is no direct obvious goal or objective for you to do. I just tend to be a completionist by nature, so when I latched on to the symbols I was excited more in the sense of figuring out an obscure secret that most people might've missed, rather than thinking that it was the purpose of the game. It's always interesting to me to find depth in things where most people might just glance over it and move on after five minutes, and this game hit those buttons.

With all the information you gave me, and knowing now that there IS a way to progressively learn to understand the symbols, I think I might revisit the game and try to finish the list this weekend. I haven't gone through all the Procjam games from this year yet, but this one was definitely one of the ones that stuck with me and interested me the most. I'd certainly be interested in playing more games from you in the future, even if you don't decide to revisit this one.

Hey Jupiter thanks for checking it out!

Very interesting! I included it in a compilation video series of all of the ProcJam creations, if you'd like to take a look! :)