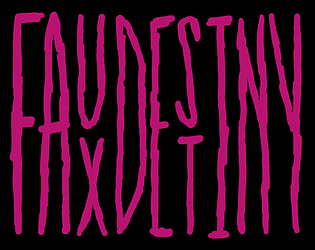 Bio
I am Brennan Richie. I am an artist in many regards, though I mainly write, doodle, and program games. I wish to use art to discover new things about myself and help others do the same. My only online presence as an artist currently is my Itch page, though I may expand in the future as I interact with people more.

Synopsis
Half of the included poems were written in 2019 and half were written for this jam specifically. Each poem has its individual meaning, though I arranged them in a way to portray a certain overall narrative in my book. I describe the theme in more depth on my project's submission page.

I have never openly shared my poetry before. I am unsure of my competence in the practice, but this project is wholly mine and I am proud to put my name on it. I would love constructive feedback for the purposes of improving in my future writing, and I would love to know how you feel about FAUXDESTINY as a whole or certain poems within.

"FAUXDESTINY" by Brennan Richie. "FAUXDESTINY is a short poetry book focused on embracing imperfection and accepting flaws. It was inspired by a dark glimpse into a possible future: a future in which humans are melding with technology, sacrificing their bodies for eternal metal shells, and surrendering their minds to artificial emulation. FAUXDESTINY was written as a message for our final moments. It encourages reconsideration; it begs us to stop fleeing from our earthly roots and take pride in our human spirit - however flawed we may be." is the summary given to this small collection. As someone who thinks and writes about the way capitalism is encouraging human beings to replace their sense of self and sense of humanity with non-human identities and personalities (the best win for a corporation is replacing one's humanity with a product or consumption of specific ones), any writing project about coming to terms with being human is something I'm definitely going to vibe with.

The design of the chapbook is that every page is entirely black. I think the font used is "inconsolata" which is a sibling font to "consolas" (the font I write all my GoogleDocs in) and all the text as well as the sketchy drawings surrounding every page are in a bright nearly neon magenta. It feels like a very personal computer terminal recovered from a future archive. Maybe this is what the final diary entries from a dying human in the year 2084 could look like. It's a very graphic account about leaving one's state as a human. It can come across as being about suicide or clearly explained self-harm, but technically the character writing the entries only dies in one kind of way. They technically still live, just without a human form. It's a gore-filled narrative about completely leaving the self behind, and that maybe that's not the best choice. A lot of people can understand or may posses the desire to stop being human, to run away from internal voids or senses of shame by becoming something with no connection to anything. But how do we know those things won't follow us anyways? Does death really allow us to escape suffering? Is the price it costs to try to cheat fate worth something we have no true certainty of? Probably not. FAUXDESTINY is a read that takes you down these pathways accompanied by a collection of doodles and drawings full of messy chaos seeking order. It's a strange little pocket of science fiction, and while graphic, is great for considering those questions on the human plane of existence.

"Every time you give another chance, you tend to assume I want to take it.

You insist that this is good for me, but I will never fall to your complacence."

Thank you for reading :) It makes me glad to know that my message carried across effectively, and that my work actually amounted to something. I'm glad I could show you my point of view, if for but a few minutes. If it sticks, that's even better :)

Beautiful illustrations accompany the whole collection. They really helped immerse me while reading. Interestingly enough, the first one "Red Curtain" was  the one that stuck with me.

Submitted
I can save myself
LikeReply
Brennan RichieDeveloper1 year ago

Thank you for the feedback! I'm glad you enjoyed the doodles, and I equally like the first poem :)

"SKIN" hit me especially hard. You put words to a feeling I've had a lot. "Your skin ends somewhere," I mean, God, that really hits. And I love the zine-like quality of the whole thing, the art is fantastic. Sorry this is so short but I just wanted to let you know how much that poem grabbed me.

Thank you so much! I appreciate the feedback greatly, no matter how short :) I'm so glad that my words were able to grab you in such a way. It's a strange feeling for me, considering that when I wrote SKIN I was pretty set on never showing anyone.

I haven't checked out your work yet, but I saw Vin's summary and the quote about the Betta fish was excellent. I will read it at a later time and let you know what else I find impactful :)