A game(Kinda) where you can read poems written by various videogame characters.
Submitted by genuina — 31 days, 13 hours before the deadline
Add to collection 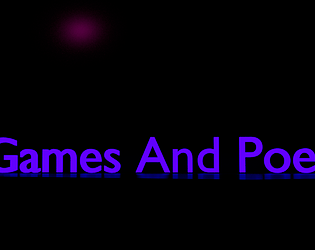 Bio
I am 14 and this is my first ever game. i have a deviant art account (genuina). Please help me better cuz i love programming, literature and art. This is also my first time writing poems.
BYE!

Synopsis
A game where you can read poems written by various videogame characters.
May contain spoilers.

As a horror game fan myself (and someone who gravitates to the same kinds of games--I love indie horror) I really loved this! The interface really grabbed me, the music and general vibe are set up in a way that evoke the experience of playing a homemade rpgmaker horror game. You put a lot of love into the way this was set up.

As far as the actual poetry, I felt the same way about it; they really feel like poems you could find in these games, and take that same awesome, sort of campy tone that goes big on emotion and horror, if that makes sense. It's the EXACT thing that I love about these kinds of games, and you nailed it. Your poems are like these fun creepy lullabies.

The only games I'm familiar with out of these are FNAF 5 and DDLC, so I'm probably missing something with the other ones, but I think I got a pretty good sense of them.  I especially liked the Fran Bow poem-- "This world is filled with monsters, /Who love to feed on darkness. /But keep this in mind / That between evils of all kind / I choose happiness." is a great stanza and makes her sound like an interesting character. The Circus Baby one is really sad.

Like I said, you REALLY nailed that creepy lullaby/nursery rhyme vibe, and it fits this particular project really well. But I hope when you keep writing, you get a chance to try and experiment more with other kinds of poetry--blank verse, free verse, or even more complicated poems like villanelles or sonnets.

Also I feel like I have to drop some game recommendations! I think you'd really like Witch's House, Ib, and possibly Yume Nikki.

Thank you so much for your suggestions. I will keep that in mind. Have a wonderful day!

"Games and poems" by genuina. This is a game where you can play through each page and interact with a scanned colored pencil drawing of various video game characters who then recite different poems. This submission is both amazing and precious. The creators says "I am 14 and this is my first ever game. Please help me get better cuz I love programming, literature, and art. This is also my first time writing poems. This is a game (kinda) where you can read poems written by various videogame characters. Only has 5 characters for now. ". It made me so happy and pleased to learn that at least two kids (see Lucy's submission here) felt welcome and encouraged enough to make something for poetry jam. The art style for this submission reminds me so much of exactly how my art used to look from ages 10-16, but instead of being made fun of or feeling insecure, we actually have a small game as a way for a kid to get better at their art. I think it's amazing! I didn't attempt to make my first game until I was 17, and I still have never finished one. The colored pencils are just great also, I was never good with colored pencils, so it's always been impressive to me. What can I say but how great and nice this submission felt to see, play, and read.

The poetry itself is pretty straightforward and deals with being from the perspective of every character depicted. Most of the characters are from horror material so the poems might seem a bit morbid. There's only one song that plays in the background the whole time that's very pretty, chipper, and upbeat. I actually really enjoyed the dichotomy of that so much because the contrast of such positive music with poems about murderous anime girls just felt really organic. It's so clear that this entire project comes straight from genuina's heart. The game itself was made with Ren'py (a visual novel game engine) and is put together pretty nicely. I actually think the illustrations are really good all things considered. I've definitely made a lot worse art in my life. My advice to the creator right now is to keep on drawings, writing, coding, and making art. You're already doing so well, and a lot of the improvement comes from time, practice, and learning multiple mediums (like digital software for making art). I think you're gunna make some really amazing stuff, and I'm so glad you submitted to the jam. Also, your poems came across really clearly, which I know you were worried since English isn't your first language, but you did a really good job. This submission was great, it made me really happy to experience all of it!

If you've got any tips, resources, software, support, or constructive criticism you could give to genuina please do! [But if you hurt, harass, or bother any of the kids who submit to the jam I will end you :)]

"I admit that i deleted her i wanted you to like me But now i know You are in your own reality."

OMG Vin! Thank you so much! Thanks a lot! It means a lot to  me! I am literally tearing up right now!!!

im so glad!!! thank u so much for submitting