Spread Your Paint To Reveal The Level!
Submitted by SominStudios (@Somin_Studios) — 1 minute, 46 seconds before the deadline
Add to collection 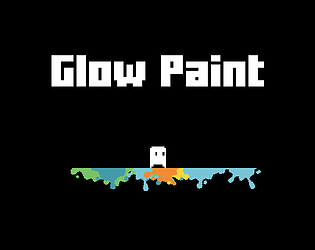 Mechanics: The Jumping and movement felt good. It seems like the player can wall jump, although I don't know if that was intentional or not as it wasn't listed in the controls anywhere as far as I could see. I found out you can wall jump when I fell into the pit that let me know that I could restart by pressing 'R'. I don't think you should intentionally put the player in a situation where they would need to restart the level, and considering I was able to wall jump out of that situation, you may want to consider letting the player know the restart button at the begining of the game rather than insinuating that they would need to restart to get out of that pit. I really enjoyed spreading paint around the levels, although I felt like the paint distribution when you walked was a bit too light. I would like to see more paint get splatter when I walk. Additionally, it would be nice to have the paint shot out based on the direction the player was jumping, rather than having it spread in all directions directly above the player as it was. This is because there were times where I would rush in one direction jumping and would hit a set of spikes before I could see them. Finally, I think the respawn time should be made to be instantaneous rather than having the split second delay it currently has. This game seems to encourage killing yourself to spread the paint quicker, but constantly dying and having to wait to respawn feels like it is wasting time that the player could be spending progressing in the game.

Level Design: The overall levels were nicely designed, although it took a while to actually paint the tiles to be able to see the level. There was one level where spikes lined the ceiling over the player spawn. This became a little frustrating to deal with since it meant me dying over and over again just to figure out where the safe way out was. I really enjoyed the 'gates' where you needed keys for were placed right at the spawn location. This made it easy to know where to go as a player, how many keys you needed, as well as that if you died collecing the last key, you were able to go straight to the 'gate'.

Art: It is really colorful and minimalistic. I really liked the cute art style. I would have like to see a little walk animation, and maybe an idle animation, on the character just to add a little more life into the character.