A rattus banner carrier fights the reversal of time
Submitted by Grem — 5 minutes, 47 seconds before the deadline
Add to collection 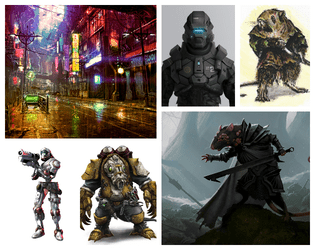 I really liked it, and didn't expect that little bit of potential foreshadowing at the end there. I can't wait to see a Kr’tchikr Timedrinker special character in a future GrimDark Future campaign!

Thanks for the support, I hope we see him too! I wanted to give the feeling that this was actual lore within a larger setting - so of course, it had to establish a special character you'd want to put on the table, and "character affected by magic/tech from another faction" is a pretty common trope in tabletop wargames to tie the setting together or let people put a little more Faction B into Faction A.

Submitted
Give In
LikeReply
GremDeveloper319 days ago

Thanks! I'm glad to see them included, made my choice of faction to focus on very easy.

You've done a very good job of making a groundhog day/edge of tomorrow style action story! I think one of the best choices you made with the story is making the main characters a band of scavengers stuck in the middle of two larger forces. It's a small but deliberate choice, and I think it adds a lot to story- I do wish you did a little bit more with it, because that's such an interesting idea. It just seems that aside from one point, only the robotic legion has an effect on the rats. I understand 1k is so little time, but you made such an interesting choice by making the main characters third party scavengers I do wish you could have played around with it more!

Thanks! If I had more time I think I would've edited some human stuff in, but the robots were my plot device for the loops.