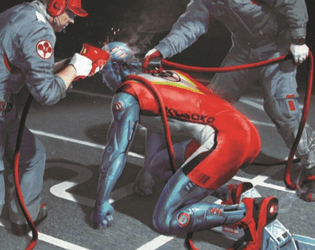 Well this is pretty cool. I love the multiple ways to score. I love that this is a fairly complete design. It's great. I like the Overdrive, I think it creates a lot of neat wrinkles and uncertainty. The pit crew is NOT my cup of tea but that's because I'm stupidly clumsy and not because it doesn't seem super fun, haha.  My comments are going to be geared mostly towards the flesh and polish instead of the bones, because I think the bones are pretty good.

- My biggest thing is that there's no synergies at all. It just isn't there. As far as a design goes, that's fine, but in terms of the contest theme: not great.

-  It seems to favor runners with high speed (first to get the ball and then first to cross finish line). If you luck into a speedster you're going to be favored to win, and if you can choose I think Alloy Frame should almost always be what you take. This is mostly because the majority of weapons require base contact; if you can't make contact (meaning you're slower), you can't use your weapons. AND your weapons can't be used unless you stop moving. So, T1, a dude runs 8", and the dude behind runs 6". Next turn, dude behind has to decide whether to move his full 6" or stop to take a shot at the quick dude. If he misses he's behind 3" and won't be able to take another shot at the fast dude (since he'll run 8"), and if he hits it's probably not going to appreciably affect the game. I know there's a little more texture in the game than what I'm expressing (terrain and overdrive effects, notably), but I still feel this is an issue, and a significant one.

I think at minimum the +2 Speed alloy needs looked at, but I think it would just feel better and more fast-paced if you could make attacks at any point in your movement. It would also allow heavy hitters to keep pace and provide more smash.

- Your section on collisions needs work. And could probably be removed. For one, how does one collide with something? I can measure anywhere, right? So why would that ever happen? Also you've used the word when you're defining it, so I don't know what a collision with terrain looks like. If we're being very specific and critical I could argue that droids collide with severe terrain and have to stop, then can move at half speed on their next turn. Since you've currently got weapons only having an effect at the end of the turn, the only reason to collide with something is if you're going to attack it, and that means you're ending your movement anyway.

- Oh, I'm not sure why you have a requirement for a full set of polyhedral dice when you only need d6s and a d12. That's a small thing. But I'd suggest removing the d12 entirely. If we used a d6 a 3-5 to hit with a 6 to crit would change the percentage to hit from 42% to 50%, and wouldn't change your chances to crit at all. In a game without much rolling, that 8% is not significant. Certainly not significant enough to warrant needing a full set of polyhedral dice.

Damn. This is some great feed back thanks. When we were designing it we talked about ranged weapons but we didn’t add any. I thought they would be too strong but I could have been wrong.

You bring up a great point about movement and allowing an attack at any point. I have it as you move your default, you can throw an attack and then use your overdrive to move away. But being allowed to attack at any time would probably make the game feel faster and feel like you were just charging into a dude. I will look into this.

I have the movement set as whatever your movement value is, you have to move that full distance. So if you have a base 6 move, you move 6 in a straight line. You can spend your single dice to pivot during that movement. In between your base move an overdrive move you can pivot for free. It makes sense in my head. So I was thinking there would be a chance for collisions, We also didn’t add in the rules about fumbling when a ball holder collides with something.

Regarding the d12, I have been really interested in a d12 system for TTRPG where the number you roll determines success and damage. I wanted to implement that into this but I think it doesn’t work well since there is only miss, hit and crit. It might work better if crit was more damage and there was a damage status that’s was between a hit and crit.

I guess I saw the loadout sections as synergies. Different frames, weapons, enhancements and crew perks would synergies with each other in different ways.

I appreciate you taking the time and giving this feedback. I want to continue working on this and these points will be very helpful.

Thanks for the well considered and thoughtful feedback nomoredroids! I think all of your points are totally valid.

We've never done a Game Jam before, so this was a learning experience for both of us. We really focused on putting together a solid framework and getting it completed and published on time. With the tight turn around time, there will always be lots of ideas that get left on the cutting room floor- we have a running list of things we'd like to implement or revise (ranged weapons are a perfect example!).

The requirement for the full set of polyhedral dice are for the Pit Crew stacking mechanic. We considered only using the 6d6 for this mechanic, but thought it would be too easy. That's something we should playtest more.

Really appreciate you taking the time to write this up, we'll explore the items you mentioned. And congrats on completing your OPR submission!

I 100% missed that they were for the Pit Crew mechanic. I think I read it as the Overdrive dice. In that case it probably matters less that the d12 is part of resolution.

I could have just read the rules wrong; they're not in front of me atm, but I'll work as best I can from memory. I believe you say something to the effect of "moving in any direction the player wants." Particularly in 1pg, you're going to want to elucidate on any mechanic that is contrary to the expectation of the reader. In this case saying "move any direction you want in a straight line" will clear it all up and make collisions more of a thing--though I still don't know if I'd expect them to happen.

To clarify about weapons, I don't think you need "ranged" weapons, just weapons with ranges that aren't 0". That will mean that a player really has to get a biiiig bump to speed to get out of attack range.

This game taught me my ABCs

A lways
B e
C ircuit racing your android

Words to live by!

wow! a sibiling game, I didn't even see your submission and mine has some things in common (cyberpunk theme and ball), what a funny coincidence :)
Did you get the overdrive mechanic from  warcry? I also saw the stacking dice thingy in blackstone fortress. I've been meaning to use those in a game too.
Either way they're very cool mechanics and they fit your game very well.

PS. and a hint of gaslands! I'm in if you want to play this on TTS sometime

I did get the Overdrive thing from Warcry. I’m really into taking old games like Yatzhee, poker, etc and trying to make those mechanics work in a Miniature’s game. I haven’t played Blackstone Fortress. I was just trying to think of a way to make the pit phase seem tense and kind of illustrate the skill it would take to work on these racers in the short amount of time. I have polyhedral dice all over so I just started stacking.

I want to do a TTS session sometime. It would be cool to make my own module.

Thank you though. I will have to check out Cyberball. I love sports games.

Thanks for the kind words Adalil!

We actually originally had "Cyberball" in the draft title until we saw your post in the Discord! Guess we all have androids on the brain haha

Like johnnyrabbi said, our initial idea was to take an old-school game like Yahtzee and combine it with a card game. It just sort of spun out from there. We were really excited about the dice stacking mechanic as a test of speed, skill, and as metaphor for the Pit Crew's quick work. Everyone has the experience of distractedly stacking dice while playing D&D, but under a short time limit it becomes a bit more challenging!

I'm not familiar with the other games you mentioned, will have to check them out sometime. Congrats on completing your One Page!

it's really an appropiate and funny mechanic!
I love it when you start with something and you keep developing and developing until you get something else
My OPR I think it's far from completed, still need to playtest lots of stuff.

I really enjoyed the detail in this submission,  the inclusion of a pit crew mechanic is really clever.

Thank you, appreciate it!