renegotiating a relationship through redecoration
Submitted by daeranilen (@daeranilen) — 5 hours, 22 minutes before the deadline
Add to collection 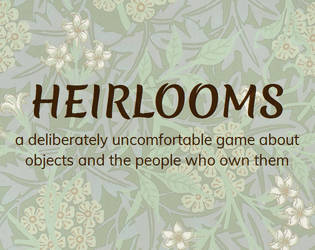 How does your game discuss the nonbinary experience? / What nonbinary characters does your game have?
HEIRLOOMS is a diceless roleplaying game for two players, one taking the role of a nonbinary adult, and the other taking the role of their cisgender parent. The players co-construct their characters, then improvise a series of tense conversations that are ostensibly about objects, but are actually about how their relationship has changed and will change as a result of the nonbinary adult choosing to live more authentically.

Did you decide to make a game that fits the jam's theme?
The moment I saw that the theme was "living spaces," my brain leapt to a traumatic argument I had with my mother a few months after I came out. My feminine bedroom furniture, which I had taken with me when I left for graduate school, used to be her childhood bedroom furniture, and the idea of me changing it caused her to lash out at me. I knew I could translate that into a game -- though I don't know that it's a game anyone would want to play.

Anything else about your game you want players to know?
Content Warnings: Emotional abuse, dysphoria, misgendering, transphobia

dragons but also rabbitsSubmitted270 days ago

This is something I've had to deal with so often... it's really tough! I really appreciate how much thought and detail you put into making sure all the players stay safe and comfortable.

Thank you! Working on this was really hard in a lot of ways, and figuring out safety measures was probably the hardest part. I think to some extent it's an inherently unsafe roleplaying space to occupy, but it's not as if I can just say that and then be freed from the responsibility of thinking about player safety! It means a lot to hear that those safety considerations turned out well.