Hello Everyone! I’m super late at making my GameDev log because this is my first GameJam and really the first time on itch.io, so I was not aware of the community section lol
Game Name: Easter Fools
VERY WIP Teaser Title: 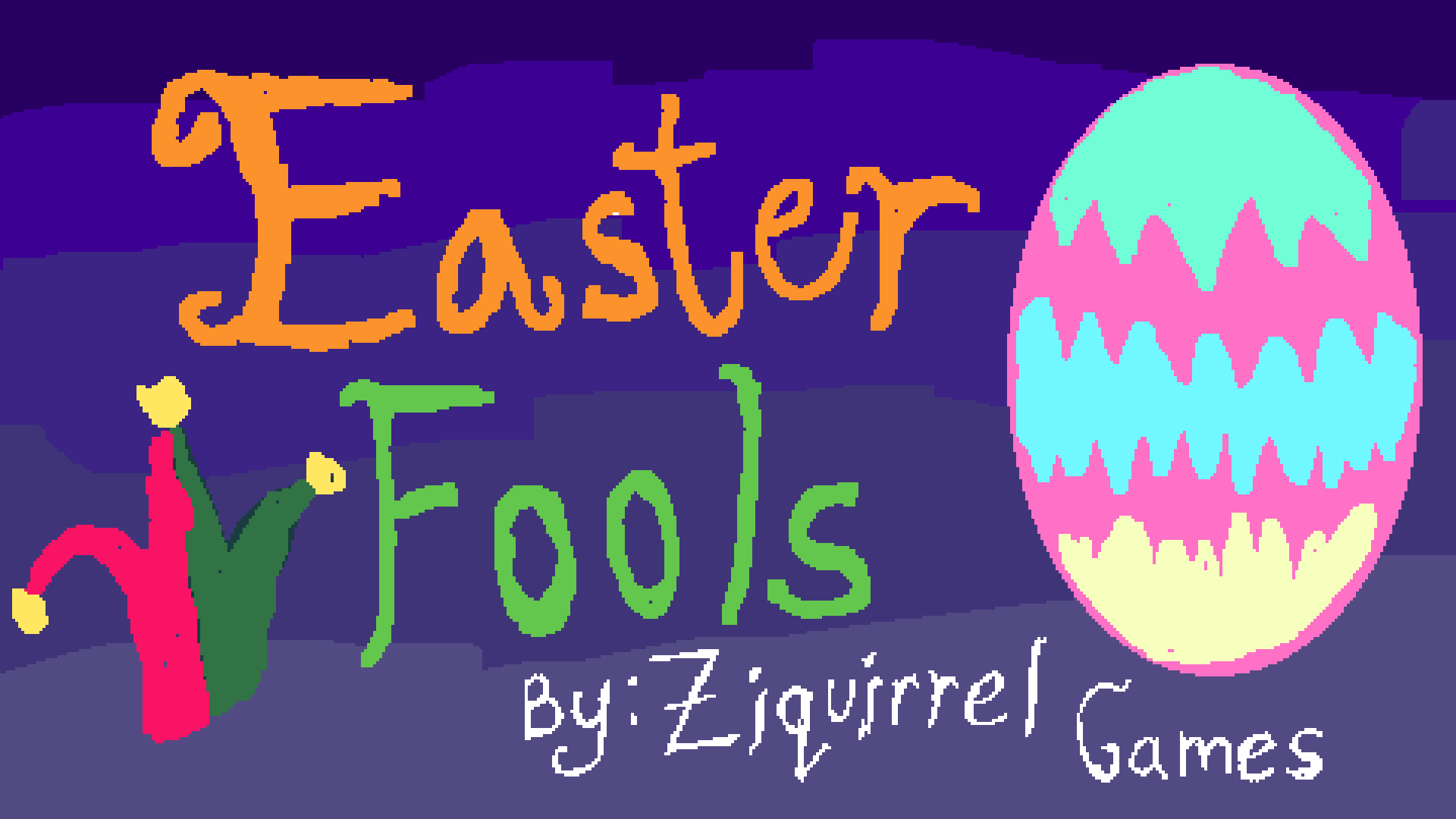 Concept:
So this year Easter Sunday is on April Fools day, and I find this hilarious, so when I was thinking ideas of games for a GameJam, I thought “Hey, what if Easterland was getting taken over by April Fools land, and you had to save Easterland from hilarious antics” so that is basically what the game is! The player is a bunny-suit clad hero welding a carrot-shooting Bazooka, taking on enemies inspired by various jokes, gags, pranks, and April Fools jokes that companies/publications/etc. have done! In the final version of the game, there will be a transition in all the levels from the “Normal” Easterland background/tiles/sprites to Surreal/Dark/Weird April Fools land, however, in the prototype submitted for this GameJam,  there will just be one or maybe a couple levels set in the “Normal” Easterland
Some of the enemy ideas I have:
Poison Flower Tank; inspired by the Squirting flower gag item
Chattering teeth enemy
Some form of Attacking Whoopie Cushion that has a deadly fart attack
Rubber Chickens
Some form of an Electric shock Gag items inspire enemy
Wolfpidgeon, Sharkfalcon, and Crocoeagle; inspired by a 2009 Qualcomm April Fools Joke
A Zombie/Diseased Teddy Bear; inspired by Brunus Edwardii, a 1972 April Fools joke by the scientific journal ‘The Veterinary Record’, about a diseased animal that was, in reality, a Teddy bear

Game Mechanics:
The game mechanics will be pretty much your standard platformer game mechanics. Players start with a Carrot Bazooka-esque weapon, there will eventually be other weapons (IE Easter Egg Grenades) that will have different damage, but not in the prototype. There will be limited ammo that the player will collect in the levels, and the player will collect Chocolate Easter bunnies that will be the equivalent of ‘Health Packs’ in older games, used to heal the player when needed. Each level the player will have to Collect plastic Easter Eggs that will be used to somehow save the day, I haven’t figured that out yet, AND the player will have to rescue an Easterland animal (IE Bunnies, Squirrels, other cute fuzzy things, etc.). I’d like to include Mini-Bosses and Boss Fights, but not sure if that will be done before the 20th

Art/Sprites:
The game is a 64x64 pixel art game, player is two-ish- blocks tall, and there are some 32x32/16x16 elements
I’m using Photoshop and Pixaki for the pixel art
Currently, for the Prototype, I’m using a public domain tile sheet for the land that I’ve edited to make more easter themed: 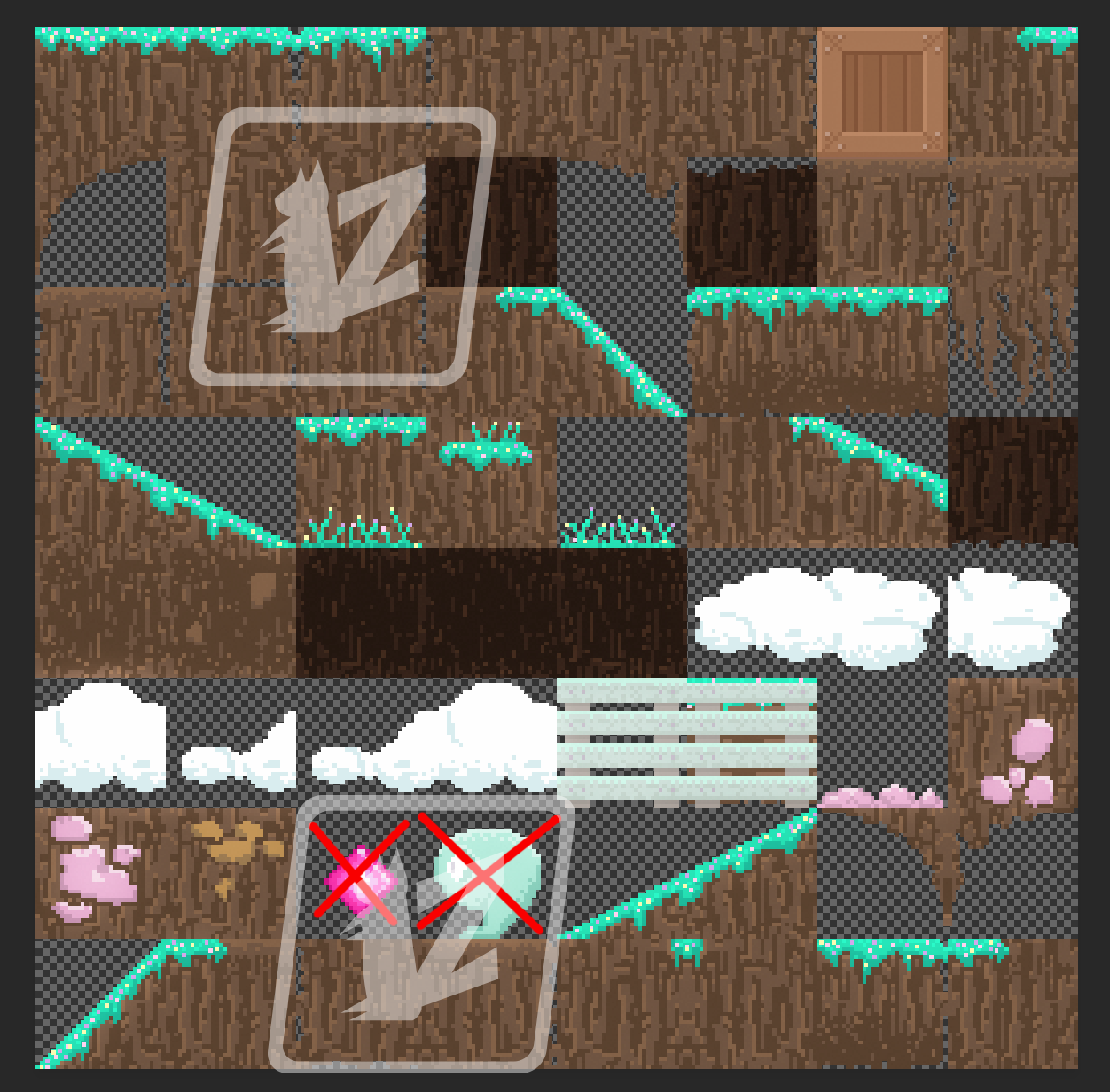 I made a very rough WIP of the player sprite and the flower tank enemy, I do plan on making the rest of the sprites! Here are some of the art I’ve made so far (PS: I made these GIFs too big in Pixaki, sorry my bad) 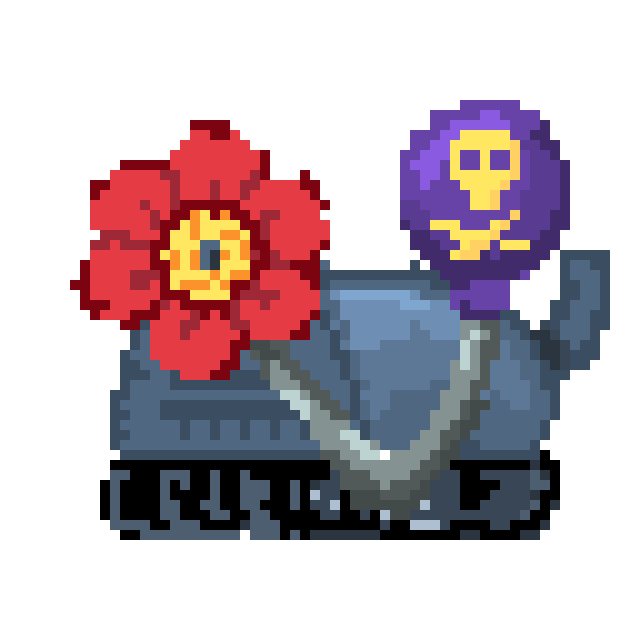 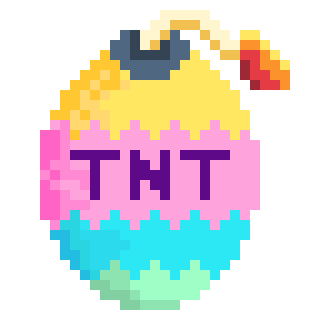 Goals of this Game/GameJam:
I’ve very bad at writing goals, no idea why lol!
Basically, I’m entering the GameJam to figure out how to make a game in the Construct 3 game engine and a game in general. Another one of my big goals is to go from being very bad at pixel art to being maybe-not-so-bad at pixel art; I’ve never been good at it, I have no idea why; the sprites I’ve made so far are pretty much some of the best I’ve done

Game goals:
I’d like to actually finish the entire game by Easter 2018; 15 levels, 5 in each ‘arc’
What I’ve Done So Far:
Made the Player Sprite and carrot bullets
Made the Poison Flower tank
In Construct 3, I’ve gotten the player movement down, player death, enemy death and checkpoints

What’s Probably Not Happening:
Animations, I’ve found animations frames are done a different way than I learned to make gifs, but animating was never my strong suit, so I don’t have time to reteach myself by the time this gamejam ends
More Weapons
Transitions to “April Fools” land
The Final boss or really any boss IDK

A Basic Re-Cap of the GameJam for me so far:
Days 1-3: Brainstorming Ideas Plus Ice/Snowmageddon
Days 4-5: Game Art with minor hyperventilating into a paper bag
Days 5-I’ve Lost Track of Days: Game Art, Trying to figure out Construct 3, increased freaking out and hyperventilating into a paper bag, Watched that “You can do it” video on repeat until my dog tried to kill me to make it stop
Day before Today- Finally found figured out Construct 3, got a bulk of everything came function wise done, then realized at the end of the day, “Crap I’m was supposed to have a GameDev long and intro questions”
Today- Get my Game dev log up lol! I will be posting an update end of day today about actual game stuff I’ve gotten done 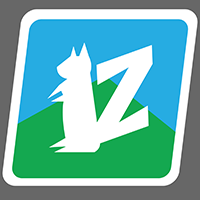 I made Ziquirrel Games so I didn’t have to release games under my actual name. Ziquirrel is shortened version of Zippy Squirrel, the name of my first car and my favorite animal!
Really though, it’s just me, Liz, I’m a self-taught graphic designer, I’m currently trying to teach myself how to code, I have a very basic understand of Python, and once I finish that I’m moving on to either C# or C++
I would one day like to do this as a legit Indie game company, because of my current situations, but if it ends up being a really awesome hobby, I’ll still be happy
My husband is currently helping me with my music, and some sound effects, but doesn’t want credit, or to be mentioned… whoops lol

Your pixel art looks really good! I especially like the flower tank and the bunny shrub. Welcome, by the way, to the jam! Hopefully you'll finish in time for your easter final goal -- and hopefully you'll have a nice smaller version for the jam cause this seems fun!

Thank you! I'm glad you like some of my pixel art, I wish I was better at leaves, I have one WIP shrub that looks like Deadpool's face, but green and covered in flowers! I really love all the art you have posted in your DevLog;  the wholeDevLog has made me laugh lol

So today I have gotten about 85% of the game's basic functionality done! All the ways a player and enemies can move, attack, and die are done; all I really need are collectibles and GUI & HUD, which I'll hopefully get all of it done tomorrow, so I can cement a few level designs

I have added the very WIP sprite of the Rubber Chicken enemy, I broke the feet animation while trying to animate the wobbly head, and at that point, I figured it was good enough lol

Also funny story about things not working today; I had gotten this enemy to shoot, then all of the sudden I messed something up, enemy stopped shooting. Once i got the enemy to start shooting again, he would only shoot the player when the player was behind him and the enemy shot only from his butt. Many lulz were had! 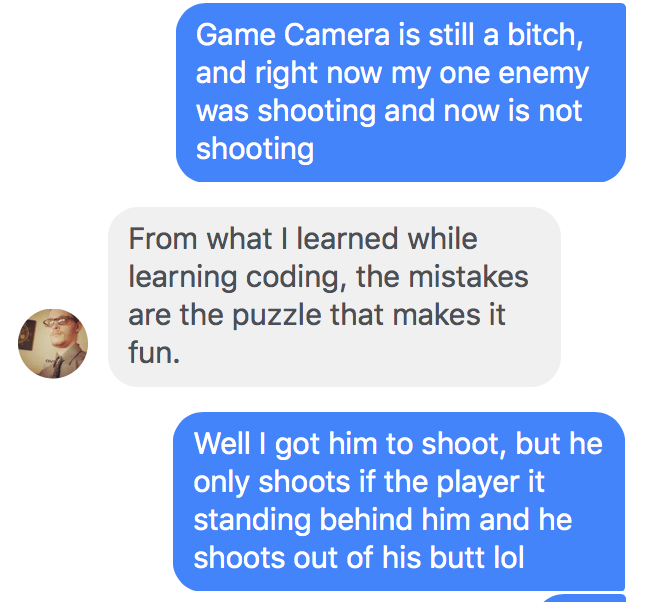 Ultimately the sprite was drawn backwards, and the stuff I was doing to avoid flipping it, was making everything confused, and even now, I have no idea why I originally was against flipping the sprite!

Just when I thought everything was done for the day, the player was randomly becoming invincible, and I had NO IDEA why; after running through debug mode in Construct 3, I realized I forgot a less than symbol, because of course I did, so the player was just getting negative hit points for enterity! At least I learned how to use debug mode lol 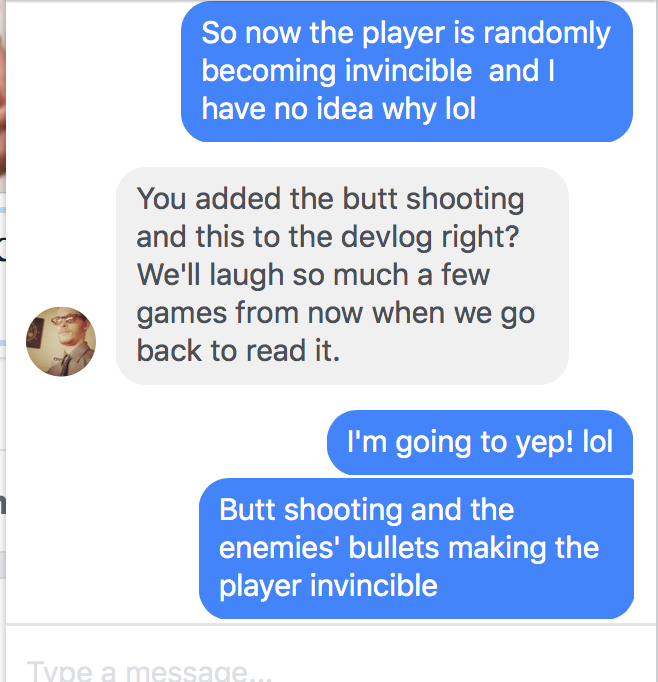 I'm glad I have such great moral support friends LOL!

I realized I forgot to post the WIP player sprite in all of his unanimated glory!