Submitted by GameMasterThe1 — 5 hours, 58 minutes before the deadline
Add to collection 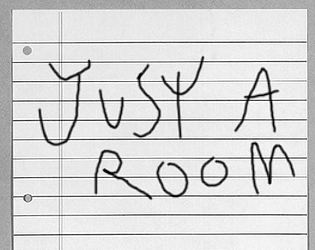 Use of the limitation
There is literally only one room in the game.

didnt expect for the game to be quite literal to the title :D great art and concept!

Liked the doodle moving sprites, glad to see a RPG Maker game in the Jam :)

Hey! It's was short but pretty cool! I really love this unique graphic style !! Goodjob!

Here is some suggestions :

- You should add more things in the room

Thanks for the input! I did consider adding in a light puzzle before you leave the room. It's something I did with another game of mine. "I Want An Annventure!

The reason why I didn't go that far is simply becuase of time. I started 18 hours before the deadline and got as far as I did with 8 hours left. Those 10 hours was spent doing a all nighter that extended to noon time. So I was very sleep deprived by the time I summited the game.

One of my sleep deprived thoughts at the time was that if I added a puzzle where you move around object, I would have to spend extra hours animated those objects, similar to the puzzle I did in I Want An Annventure, and I was on the verge of dozing off and wasn't sure I'll be able to implement such puzzle before the deadline. THough in hindsight, I probably didn't really need to make new graphics. I could just add text boxes that say "You Found a key!" or "You moved this thing!" and just add some extra steps before you open the door. And through collecting and moving object around, I could add a little more information on the main character. But even if I add a munch of text boxes, there's a chance I might have ran out of time anyways for being slow and thourogh, or just dozing off. BUt yeah, If I were to update this game, I would probably add some extra things to do and see.

What you made is still pretty good in only 8 hours! At least you got a working and finished project! For me, I always work with a team because I can't finish a project alone lol, and we need the whole jam to finish our project x)