Save the frog
Submitted by Magn — 20 hours, 5 minutes before the deadline
Add to collection 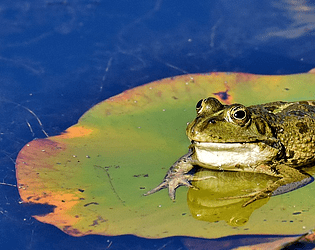 Which games did you mashup?
Frogger & Battleship

Which parts of the game did you create BEFORE the jam STARTED?
The music

Which parts of the game did you NOT create?
Some of the code is borrowed from here: https://tympanus.net/codrops/2016/04/26/the-aviator-animating-basic-3d-scene-threejs/

Neat game! I included it in my compilation video series of the Mashup Jam games, if you’d like to take a look. :)

Thanks Jupiter! I am working on a "sequel" to Frog Island now so check it out (once it is done).