10 Humans, can you keep them alive as they pass through 4 dangerous levels?
Submitted by Xanderwood (@GameDev_Alex) — 1 day, 1 hour before the deadline
Add to collection 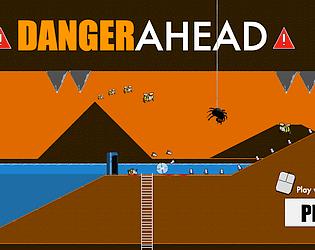 Playthrough + Results video is up!

It's a good game. I like the concept, especially. I feel like with a bit more polish it would have some more potential and I also encountered a few annoying things.

1. Sometimes the tutorial text is off screen. I got to the part with mines, and the tutorial text for them was pretty much all off-screen. The people started exploding and I wasn't sure what to do. Eventually, on my third try, I found out I needed the wrench.

2. Sometimes the people get stuck on slopes. And I mean stuck stuck. There's no way to get them out. They just stay there, and get killed. Not even the run button works.

3. This is pretty minor, but the enemies moving through the ground makes the game a bit to hard.

Other than that, this is a great game with a good concept. Nice job!   :)

hi, thanks for taking the time to play and comment. I appreciate it.

I agree with you. I too have noticed that the men get stuck, you can shoot them with the gun but that isnt too clear. I will probably make some amendments based on your feedback, also the wrench icon and gun crosshairs could be bigger too.

Yes, please. That would help so much. Also, I hope I wasn't too critical with my review. It's just that, this is actually a really good game, and I feel like it could get featured somewhere. But yeah, thanks!

amazing. Thanks for the kind words. Check my page in a week or so, I'll be working on it this week.