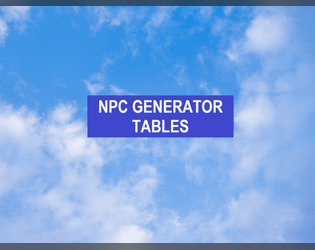 Yea, this does what it says on the tin

In my opinion, some rolls are too specific to leave up to chance? Granted, I'm more versed as player than GM but I wouldn't e.g. give a random npc a bloodied knife as loot, players would probably use that as motivation for something and that should be part of deliberate design by the GM I feel.

Also, I love the tavern generator but it could have used some variability in the naming pattern, another roll that determined the pattern of the name. Currently everything is The [noun] [preposition] The [adjective or gerund] [noun], but I could easily see including a roll that told you to only performs rolls 1&2 or just 3&4.

The layouting and visual design is very functional and initially seemed very barren, but after a few practice sessions, I can very much appreciate the not-busy-ness of everything.

So personally, I'd probably do some modifications on what this generates in some instances, but just the sheer breadth of content and prompts you have provided here is really cool to work with! Nice