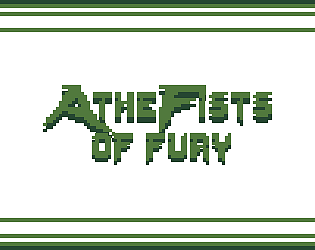 Random Game Idea
A fighting game where you gather protesters against worship.

We started off learning the brand new engine Defold. That means coding in LUA and since we are both mainly c++ programmers, that was AWFUL!
I mean come on! if (true) then DoSomething() end
who came up with that stuff!

We focused our rage on developing as quick as we could and quickly had something up and running. It did not feel real good, the enemies where way to "just follow and hit" so we invested a couple of hours in building a basic AI with fear,bravery etc.
This was a massive boost to the game and made it feel more like a street-fight.

As usual didn't sleep much the last days but we thought the 24th where the deadline so when we noticed it was not we got some extra time to sort the worst stuff.

It's obviously still not perfect but those extra hours where worth their weight in gold.

Lots of feature ideas where cut, the big one would be more enemy sprites. The naked sprite we have now was meant to be the base for the other sprites. But we didn't have time for more art, we had to code.

Pros:
We made a rather complex game in a very short amount of time.
Learned a new engine.
Pretty happy about the style.
The feeling in the combat turned out good, for the amount of time we had to spend on it.

Cons:
The goal of the game is not very clear.
We didn't get as much religion in there as we would have wanted.
LUA, COME ON!
The game is not super-inventive from a design point of view.

You can only download it if it's uploaded as a downloadable file... So if you've got some HTML file or something, you can upload the necessary files in a zip file and offer it as a download. But right now, it's only playable on the game page.

BAH! I well tell the folks behind the engine.
Thanks for the report! Can you download it and play? I think that's an option on itch

I'm not able to play it. It's crashing in Chrome and not loading in Firefox, newest versions of both on Windows 7. :(