Shooter, save Horse World from an alien invasion.
Submitted by Ether Tear LLC (@ethertear) — 19 hours, 51 minutes before the deadline
Add to collection 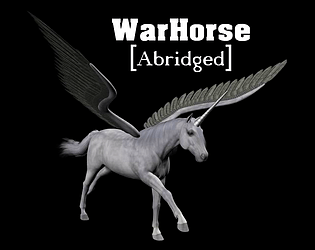 The shots are too hard to see, the enemies aren't very interesting, and level design doesn't give the impression of having been designed. The enemies just float by shooting in no particular pattern, and there's no sense of how to avoid getting trapped by shots, especially when more enemies show up. Were you able to beat this without getting hit? If not, did you test for the ability to beat this without getting hit?  If neither, then it's a safe assumption that your game is unfair.

Also, on a technical note, unpausing doesn't clear input, so if the game is paused while the player is pressing "a" or "d" (such as due to accidentally clicking), then that direction is still considered as being pressed when the game resumes.

Alright, I have a lot of thoughts about this game. The music is great, it is fun and challenging... but a little too challenging. I got to level 4? (the one after Doc horse finds you and tells about zones) and just get demolished here. The arrows basically do nothing in this stage, and there's just so much on screen... I really want to get to the point where I have magic and am flying around though, so I keep playing! It is quite fun, and can see this being a great mobile game... maybe for mobile you can integrate it with advertisements to give the players boosts to damage or HP or something for watching ads as opposed to just making things easier. Anyway, keep up the good work, I want to play this game more and  get past that level so I hope you keep working on it!

I have been wanting to make this into a mobile game where players can upgrade their gear, and make cosmetic changes.  So, if a stage gets too tough, they can grind until they can afford upgrades, without any limits.

I have played bullet hell shooters where even with max upgrades, I still can't beat a stage.  Sounds like I accidentally made this game version like that, since the grind-to-upgrade mechanic is not implemented, thus it can be said all the gear is max level, for now.

cool, that's a good way to do it. I look forward to the polished mobile release so I can continue my journey with Kyle!