A stranger wakes up in an unfamiliar place in need of help. So who are you, stranger?
Submitted by Amudeus — 7 days, 1 hour before the deadline
Add to collection 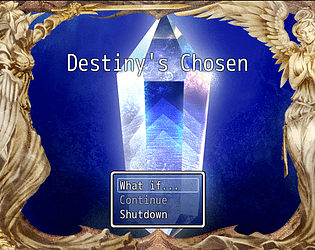 Oh.. well tbh the game kind of lacked some excitement.. I picked the vampiress as a character and I liked talking with the villagers and seeing their reactions (esp. the little girl that went to hide in her bed haha). But the random battles and the dungeon were a bit boring.
For example those skeletons you put there, it would be cool to see our character reaction to them.
I was a bit sad that my awesome vampiress only had one skill! I'm so used to vampires having some sort of draining skills too.. xD
Moving around the dungeon was a pain tbh. It was huge and it had a lot of paths.
I thought the seal keeper boss was a bit weak too.. I won that fight in like 4 or 5 rounds and only his strongest attack (that took away 400 hp!!) was a surprise. lol
The ending made all this worth it somehow though.. it was short but so unexpected!
It got me curious to know where the story is going! :P

Some errors and bugs I came across:
- Right at the beginning, when you are reading the description to the vampiress, at one point the portrait that shows is the one for the male vampire.
- In the world map if you enter that little house next to the village and then leave, you end up in a different spot in the map from where you were (you end up in the house across the bridge in the map actually). And then entering the house in the map next to where you end up takes you to the musician house in the village again but you stuck inside without being able to move (gotta fix this!)

Overall: The game was actually not bad, but I think the game could gain if you worked a bit more on the dungeon to make it more exciting to explore, same with the houses in the map, they were pretty much useless.
Good luck and I look forward to see a follow-up game to this one day! :)

Thank you so much for your review. I'm sorry for the bugs. I thought I had them fixed in the final version. And I kind of thought the combat might be an issue. Sorry for the boredom. It started off too hard and I guess I over corrected to make sure it was winnable. I find the damage formula a bit daunting as far as balancing everything with the enemy stats. So I just wanted to focus the game on the one thing I really hoped would be good. The story. And I'm glad you liked the ending. It wasn't in the original plan, but I felt the need to add something to let people know that there is a bigger story, I have it planned out, and that the characters didn't appear there "because reasons." It's a big thing I hope to get to tell eventually. With more exciting combat, hopefully. And should I be able to continue the vampires will absolutely have draining type abilities. I just wasn't sure that I should have them at the beginning level, and then...you know. Bad at formulas. Haha. And of course I'll now be trying to make my dungeons more exciting/reasonably sized.

Your game seem okay for now, but there's a bug where we enter a house and teleport in the wall. You should fix it.

No it was the house of the guy who dont want to be disturbed. Red hair.

I've checked every event. It's the one with the piano right? Does it happen with a specific character? Is it through the door or after you talk to him?

No we spawn there after entering a house in another village.

Are you sure you have the right game? Mine only has the one village. A few farmhouses too but they all go to the proper place.