A series of FAQs for a fake MMO.
Submitted by CannibalInteractive (@TheWorstRPGDev) — 26 days, 23 hours before the deadline
Add to collection 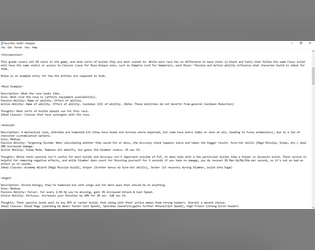 Phew...that was a lot to read. Definitely wins the award for the most excessive entry!

I just dabbled with a few free MMORPGs 10+ years ago, so I'm probably not the best judge for that, but as far as I can tell, it's all pretty conclusive. The game history document is a neat idea as well.

Being able to play as a Bunbun Barista is one of the things I'll want in every RPG from now on!

Thank you! The scary part is how much more I wanted to add. I'll probably just add more to this entry in future years.

I honestly haven't played many MMORPGs. The one I have pretty much any experience with was Wakfu, where the ecosystem concept was really interesting, but also oddly executed initially since there was literally no currency that players didn't mint, so everyone just mined all the time to make coinage, which they eventually altered. But yeah, I really just wanted to come at this with the thought of 'if I had virtually no resource restrictions, what would I want to try and make'.

I may have to add that in future games then! Playing around with the race creation made me want to get back into trying to make a tabletop game again.