Submitted by GoKritz — 10 hours, 49 minutes before the deadline
Add to collection 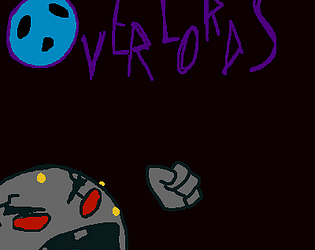 How does your game interprets the theme?
You are an OVERLORD, and you must defend yourself/compete against other OVERLORDS

What Haxe game engine or framework did you use?
HaxeFlixel

I love the concept but I had a hard time getting into it just from the numbers, They spawn faster than I can kill, overlords seem to take way too many bullets, where buddies die faster than teens in a horror movie. I'm sure it's fun if I can precisely and quickly kill a few overlords and get a few buddies, but I'm having a real hard time doing that.

It'd been nice if maybe the starting enemies were weaker and it got stronger once you had a chance to get a decent army. but the fact that I can't spray and pray against damage sponges is really holding the game back. I had better luck in sacrifice if I just camped out on top.

With some more time, some number balancing, some more progression this can be a really cool game.

I liked survival mode, once I figured how to stop giving the other team points.  A different sound when you score, versus when they score would help differentiate.  The "to 30 points" win condition is a little high unless the AI is made a bit stronger.  Good job!

I’m sorry that I couldn’t play the game for more than a few minutes, the camera is too nauseating for me.

Fun game, a bit hard for me. The second mode was cool, seems like it'd be good for MP.

The game is alright, but the camera can be nauseating at times.

this game is pretty cool if I say but the art isn’t my fav!

Glad you enjoyed it, thanks for playing! My paint skills were pretty stretched here ;^^