Submitted by Derek52 — 32 minutes, 42 seconds before the deadline
Add to collection 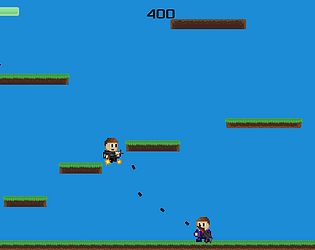 Source
http://Yes, on Gitlab after I do some code refactoring.(Parts of my game are held together with glue and staples right now)

Game Description
This is a 2d shooter, that takes place in a small platforming level. It was a lot of fun developing. I came up with several good ideas that could not be implemented in the time I had for this game. I'm seriously considering expanding it though. I'm a LibGDX guy who has recently transitioned to Godot, and I'm really liking the engine. It may become my primary game dev environment.

Controls
Use WAD or Arrow keys to move. Or space bar to jump. Use Left click to fire bullets. And press 'E' or Numpad_0 to activate your rice power(if you have any rice), to unlock your hidden potential and get yourself out of a jam.

Hey, I worked in LibGDX once upon a time! Welcome to Godot!! So glad you like the game engine. This definitely feels like 'My First Project' in this game engine. Hope you'll stick around and submit a game next jam, if you have time!

The game hardly use the theme as it's only with the Rice Power (how does rice camouflage you? Does it absorb your essence? I need to know.)

The platforms were easy to jump on. I immediately realized that it was  a double jump/float in the air kind of deal (perfecting jumps is a true pain). I wish there was a pause menu! Also, it seems extremely unfair to me that the enemies can shoot through the platforms, but I can't. :(

There is no music...? There were sound effects, which I appreciated.

Interesting that a shooter was combined with platforming. I feel and maybe this is just me that platformers are usually mixed with melee type games? Either way, I had fun and played longer than I thought I would tbh.

It's  a platformer merged with a 3rd person shooter. It's a good starter project but nothing groundbreaking.

Thanks for the feedback. This isn't quite my first project in the engine. I've built some smaller prototypes of stuff before. I've been keeping an eye on this engine for a couple years. I keep going back to LibGDX though. I'm trying to really learn Godot though, cuz I do find some stuff to be pretty easy to do. Especially exporting the game. Super easy.

I am struggling with getting used to a couple of things though. The jumping is one of those things. The jump could probably be improved by spending more time tweaking the gravity value. It's just there was a lot of stuff I wanted to tweak. I'm used to writing my own physics in LibGDX, and because of that, stuff like move_and_slide() feel like magic to me. I say magic because move_and_slide() really shortens the code, but also makes it harder for me to understand what's happening, or control things as much as I'm used to.

I have this same problem with collision detection. I'm used to manually checking hitboxes against each other to find collisions. I'm starting to get more comfortable with the way Godot organizes stuff though.

As for the theme. I wanted rice power to be a bigger part of the game, and due to the time limit(I didn't set aside enough time for this jam), my plans didn't work. But rice power is a joke on Gohan from dragon ball Z. Gohan is Japanese for rice. So the joke is that rice power, is unleashing your hidden potential, or your true powers. I think my ideas were good, and I'm looking forward to implementing them in something a little more complete.

I do think most platformers are melee based games. But, there is stuff like Metal Gear Solid. I think this game worked better with guns than melee. Partially because I had bigger ideas for the rice power. And partially because It was easier to animate.  I considered having a few melee enemies. But I couldn't find a good spritesheet for a melee character I liked, and I"m not an artist. The characters are supposed to have run and jump animations in my game by the way. The characters I used actually had spritesheets, but I couldn't make them work with an animatedSprite node. I would have needed to go into GIMP and cut up the spritesheet, and didn't have the time for that.

It's the same reason the game had no music. I can't make music, and didn't have time to find a royalty free piece I could use. I listened to a couple and didn't like them at all. The game also had no sound effects until half an hour before I published it. I quickly made some sound effects in SFXR(a favourite piece of software). They definitely made the game 30% better by themselves.

Finally, the enemies shooting through platforms was a mistake I didn't catch. They aren't supposed to be able to do that. In my playtesting I somehow was blind to the fact they were doing that. Oops. I'll put that on the list of things to fix when i go through and refactor my code for open sourcing. Same thing with a pause button. Pausing is something I totally forgot about until I was trying to take a screenshot of the game as I was uploading it to Itch. It was just totally overlooked. I'm also not even sure how I'd add it, the way the game is currently structured. I'm not sure how to go about pausing all of the enemies and bullets.

Thanks for the feedback though. This game isn't what I wanted it to be, but I am pretty happy I got a working game made in the relatively small amount of time I had.