Volleyball but you are a pair of birds doing your best.
Submitted by josef01, inkhorse, Kestrad, klaro — 4 hours, 56 minutes before the deadline
Add to collection 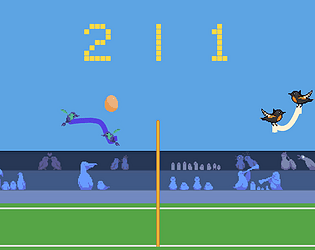 How does your game fit the theme?
Your pair of birds is Joined Together.

Too bad it requires two players with controllers, it probably decreased a number of people who could play it. I still have no idea how you accomplished such great looking and working fabric physics. All of it looks great!

Yeah, we thought about that and had originally intended to add a single-player "rally mode" where the ball would get returned by some sort of pong paddle, but unfortunately ran out of time to build that mode.

We went through at least 4 different iterations for the fabric physics, and then refined the final version for a while until it felt good enough. It actually ended up being a series of points connected by spring joints with lines drawn between them. Connecting segments end-to-end results in weird pendulum effects, but a series of spring joints on points actually looked pretty good. It required a good amount of tweaking so that the egg wouldn't punch through the ribbons though!