a cyberpunk BRAWLER without FIGHTING
Submitted by zre — 12 minutes, 48 seconds before the deadline
Add to collection 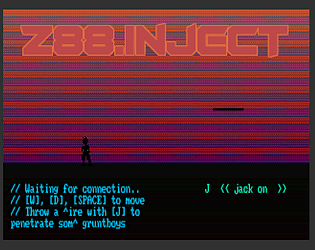 A funny little game! I've had a hard time figuring out what am I supposed to do, but once I did it was kinda fun. It's a shame, that the UI doesn't scale with the window, I've had a hard time reading on my 1080p monitor. The jokes about jack dejecting were actually very funny.
Menu navigation during hacking was a little confusing, until I explained it to myself, then it became intuitive. I don't know if it was intended, but an enemy that should have been stunned forever started to move again after some time. It's probably because I did this to the other enemy. I didn't figure out what those number above the enemy's head mean but I guess those are resistances.
I'm liking the aesthetic, but the gameplay is a little bit too confusing for it's own good, of course I still enjoyed it.
Very nice work!

Submitted
Rogue I Don't Like
LikeReply
zreDeveloper1 year ago(+1)

Thanks for playing! Yeah, unfortunately I didn't take the time to explain how the gameplay works well in-game or implement proper window-scaling. You are correct about the resistances, and you are correct about how the stun was supposed to work -- the dd0s payload is intended to only work with one enemy at a time, so when you apply it to another enemy it un-stuns the first.