a star in a machineView project page

a gmless rpg about industrialization and society.
Submitted by riley rethal (@rileyrethaI) — 4 days, 8 hours before the deadline
Add to collection 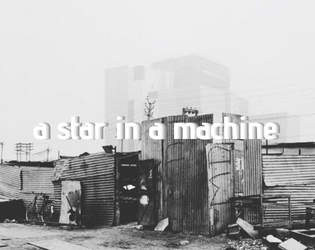 a star in a machine's itch.io page

Who are the authors?
riley jaceaddax

What type of game is this?

This is really cool, especially the two tracks and the two endings.

1 - Deal 7 cards to each player and don't ever draw new ones. This means you will have to make tough choices about each situation (and if the game teeters on the edge, you won't have any choices at all about the last scene.) Also it means that you can look at your hand at the start of the game and get a sense of the personality and resolve of each character. If you get a bunch of black cards, guess what? Your character supports the status quo. How are you gonna deal with that in play? Tough questions.

2 - Expand out the paragraph about the star. I get that it's a metaphor between the players, but is it an actual star in the game? Maybe some prompting questions for us to discuss about the star. (Its appearance? Is it dangerous? Who found it? What are some of its properties?)

Great job, would definitely recommend/play this one!

thank you so much! this was really helpful, i really like the idea of drawing 7 cards at the beginning and i actually had some more questions about the star in an earlier draft that disappeared at some point, so i should definitely add that back.

I especially think the simple red/black combo and the two tracks are kind of a really interesting engine that could be used in many other contexts for a freeform style "limited number of scenes/resolutions" game.

that is so valid, and thank you omg!! yeah, i also really like this format, it's an updated version of a similar mechanic that i used for all's fair, but this one is a bit more elegant, and the inspiration is definitely originally from ben robbins' kingdom. my goal recently has been to figure out game mechanics that are more communal, so this was a very fun one to write. i'll definitely look into some hacks in the future... maybe something about a group of friends after high school... or a space rebellion? those were the first two that came to mind.