Puzzle/Parkour/Shooter
Submitted by Potato-Butt Games — 18 days, 8 hours before the deadline
Add to collection 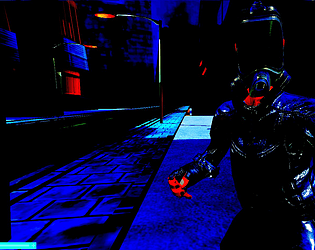 Mark any diversifiers you're using.

This is looking pretty interring. I did not found a lot to do, but it was still fun to walk/run/jump around and shoot stuff.

A selection of objects can be shot and destroyed by the player. They are:

2. Certain Barrels in the Industrial Zone

3. Security Lights and Cameras in the Industrial Zone

4. Transport Bots in the Industrial Zone

- The kinematic player controller has been designed to handle a little like a skating game or similar where the player can grind on certain buildings and fences. The physics are intentionally unrealistic, ridiculous parkour maneuvers can be performed like double jumping in mid air.

- At this early stage the hover cars cannot be driven but some basic hover style physics have been set for them. There are 3 in the scene and can be interacted with by sprinting at them and jumping while colliding with them. These hover cars are for the player to use and position into spots to make a platform for them to jump up from in order to jump or climb up onto some other building or part of the levels.

- There are 3 moving platforms in the scene. One is a vertical elevator, the others are both horizontal sliding platforms. They are located in the Industrial Zone. There is also a large transporter robot which moves like a platform, but cannot be destroyed like the other two smaller robots can.

- Unlike robots and platforms, AI enemies have been programmed to calculate their own patrol routes. At this early stage the AI cannot be killed and cannot attack the player. There are two AIs in the Industrial Zone. Both have force shields encasing them which player weapons cannot penetrate. One of the test AI's has some particle effects which will be used to simulate the enemy electrocuting the player if it gets too close or makes the AI turn aggressive by attacking it. The other AI has a hard collider on it which the player cannot get inside of.

There are other odds and ends on the map, like some graffiti to find, a vending machine, a toilet-- but very little interactivity has been developed with any of these prop items, however, intention is there to make the items interactive, with plans for many more mechanics, physics, interactions and game objectives to complete in a linear-fashion.