Send a message across Earth
Submitted by teonistor — 22 hours, 18 minutes before the deadline
Add to collection 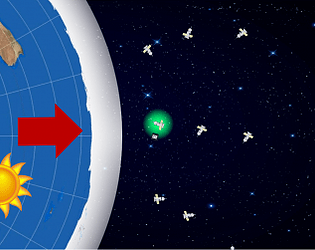 Let people know how long has this project been going, or share a bit of its history.
This game was first created for Global Game Jam 2018 over the course of 36 hours by a team of 4. We warned you then that the game was more difficult than we'd intended. We promised to fix bugs when we have time. We never had time.
A while later I thought it would be a good idea to play my own game to kill some time on long bus journeys, but the jam version was Windows-only. So I created version 1.1, with bare-minimal touch support, and released it as WebGL.
Now with FFS2019 on the horizon, I decided to make Relay a much more playable game. So I fixed the bloody bugs, improved the interface, added the "Rewind" feature, sound effects, and proper touch screen support, and released version 2 for Windows and Android.

A fun little game once you get the hang of it! Definitely an original idea from what I can tell :)