Luck Of The DrawView game page

Submitted by BoxStudios — 2 minutes, 33 seconds before the deadline
Add to collection 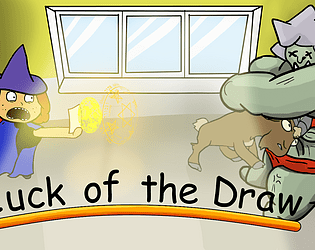 Luck Of The Draw's itch.io page

In what way does your game fit the theme?
ABSOLUTE CHAOS!!

Did you write all the code yourself and made all the assets from scratch?
yes i did... everything:)

I ummm... don't know what to say. Good job getting this together and it certainly was chaotic haha.

I didn't understand what was happening but still had fun! Nice visuals and voices! Some more polish and this could be worked on to be a cool game!

Well it was chaotic for sure:)

The physics were nice, the graphics colorful.

The voice acting was a nice idea.

It was an interesting game, the idea that i can just wander off mid-class, I wish I knew that when I was in school.

The game art was a nice draw (pun somewhat intended), but there was a lot of unclear things with the game.

For one, there was a lack of feedback with the spells. Sometimes goats charge, sometimes they idle. Does the duck do anything? Is the hearts mine, or is it the red bar (it's the hearts, as I later learned), and why do I take damage for seemingly no reason at all? I guess the goal is to defeat the teacher(?), but the ogre showed up out of nowhere while the game told me how to summon goats (which in itself wasn't consistent as the cards made it something else later).

The voice acting was a nice surprise, and I liked the physics, but the game is held back by too many unclear factors.

Submitted
Sportsball - Do the Thing, Win the Points
LikeReply
BoxStudiosDeveloper1 year ago (1 edit)

We're aware of most of those problems (exept for the health one, didnt think about that since we created it). We simply didnt have enough time to finish the game properly because the one week deadline was pretyy harsh considering we only used about half of that time. The boss fight was rushed through near the end and the health mechanic's aswell. We dont consider this to be a finished game and want to improve and build off of it.