You Are My SunshineView game page

Radiosity puzzle. Find your way into the blues of life.
Submitted by ivankio
Add to collection 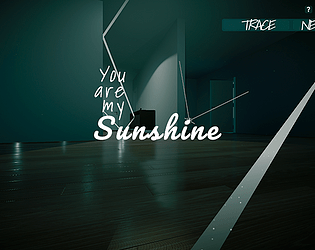 You Are My Sunshine's itch.io page

Thank you very much. I am planning to turn Sunshine into a game, and I guess that this intention together with the ease of testing ideas with Bolt allowed and pushed me to polish a bit more than usual.
And thanks for Diadas for the music and early feedback. If things go as planned, we may end teaming up.

I understand the questions were for me to ask myself, but I'll publish my current line of thought for the record and the curious. About the future design, I worry a bit about gamification taking over the atmosphere as I see the UI already cluttered over it in this prototype. But I do have more plans for gameplay than the theme:
- After you solve for whatever opening, that window closes and you have to try another.
- Increasing difficulty with a more punishing "lumen taxing" system.
- After beating hard, unlock a zero gravity billiards game in the same scenario but with cozy lighting.
- The different behavior on different surfaces was planned but I didn't manage to implement it in time.
- A high score system for "fanciest path" to cater sandbox gameplay. Factoring ray length, bounce count and angles closer to 30º and 60º instead of 90º and 45º.
- A per window high score for optimal path (least bounces, least lumen spent) to cater OCD.
- High score online tied to replays. I like Soundboxing's shy social features.
- 3rd person and VR are still on the table.

Level design will be the maker or breaker of the game now, but Marui in Maya and a custom path previewer should help make it backwards.