Defend a snail with friends!
Submitted by ecumene2 — 47 minutes, 10 seconds before the deadline
Add to collection 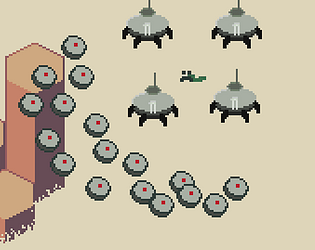 Too bad you haven't finished it. I have similar impressions as DidiBear. I'd like to see a playable version of this game.

I was able to make it run !

This looks like a classic tower defence but split in two:
- the main window in which drones' attacks are happening
- the web page in which we can add turrets

I think this split have potentials, like having multiple players in the same map doing whatever.

I really enjoy the graphics and the cinematic-like feeling when drones attack.

Too bad it's unfinished:
- Adding Stun Gunner crashes the game xD
- Turrets are invisible in the main window when drones attack
- Kinda complicated for anyone to run the game
- Missing UI showing points and spawning time
- Missing sounds
- I only found out that the goal is to protect the snail from being Roomba'd by letting the game panicked after 2 minutes xD

Thanks for playing! Glad you enjoyed the parts that were playable. It is very unfinished as you said