A cubic puzzle game set in the Antonverse.
Submitted by JetCF2 — 3 days, 12 hours before the deadline
Add to collection 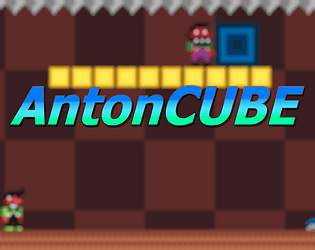 my atari won’t play this.

this one is real funny and it's got a funny name. the game play looks good but i have not played it. 10/10

Very fun mechanics and CRT mode is the best way to play it.

Nice puzzle game and it has paul in it but a little boring at the same time. not bad by any means, though!

there's a lot of good things i have to say about this game!

the simplicity and charm is something you'd find in an actual anton game. the element of puzzle solving by moving a cube to the start and end of the level is also good, as it's a drastic change from the norm of balls in the antoniverse.

unfortunately, the game suffers from the fact that a lot of the detection and movement can be finicky. enemy hitboxes, the hitbox of the cube itself, and the way anton moves isn't very satisfying.

the puzzles itself were good, although the curve and progression seems rather unbalanced. i liked the simplistic nature but some puzzles didn't have a clear way of clearing them, like in the blue stage in the screenshot.  some levels i had to retry 20 or 30 times.

all in all, it was a rather enjoyable experience! i loved the addition of Annie as a playable character and a CRT filter, which were both unique elements not found in some of the submissions.

i recommend this game to all anton fans!