Submitted by Evilous — 2 days, 19 hours before the deadline
Add to collection 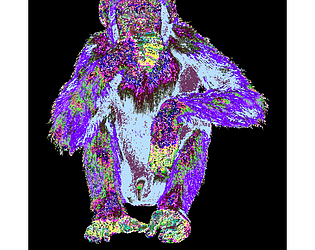 Heck yeah, I beat the demo, I made it to the monkey man.

As far as bugs go, I once got stuck after getting killed by a turret, the game didn't go back to the title screen (windows version).

It plays a lot better than the last version, less momentum feels a lot better and I think you also decreased the enemy bullet speed, which makes dodging possible, I like that. That really sets up some gunslinging situations. Also still a fan of the music and the general visual direction.  The turrets still made for some good timing puzzle pieces, and I also liked the final regular level. Originally I was going to comment that it would be helpful to have a second or so at the start of the level to orient yourself, but that level made me rethink, if maybe remembering the levels should be part of the challenge.

The boss will probably be a good next area of improvement, I feel like there could be some cool stuff you could do in a 1-on-1 situation with the game. Either way, it was a great improvement from the last demo, awesome job!

Getting touched by an enemy and immediately sent to the main menu can get pretty frustrating since it makes it much harder to tell how I died and it makes me sit through the short cutscene with the chair each time as well.

Locking the cursor to the game window would be nice as well because my dual monitor set up leads to me clicking outside of it pretty often. The cursor being the same red as the walls doesn't help with that either.

The gun play itself could feel more satisfying if the player's bullets went faster, and whatever they collided with had effects going in the direction of the bullet (i.e. blood, debris, etc). The corpse is a good idea and you could go even further if you emulated what Hotline Miami did to juice up kills.