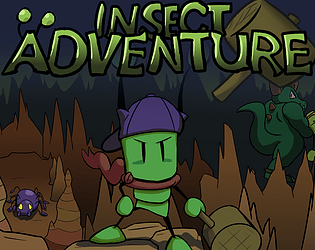 This feels really slick except for some minor things. Switching to another program is a bit dicey, the transition took a minute and the game responds to the mouse even when it's not active. I really wish you fell faster, I'm just sitting there waiting to jump again, especially if I miss a jump. I got stuck in the corner of the wall directly to the right of the first save point, I could reproduce this just by walking into it. It would be nice if I could check signs without coming to a complete stop. This is another game that didn't run the best, in this case freezing for a split second at irregular intervals. I didn't like how the Enter key not only didn't act as accept but backed me out of menus. I'm not sure if this was intentional, but when standing still the hammer swing animation plays twice and consistently holds for a bit on the second swing, but not always for the same amount of time. I wasn't fond of how the dodge roll is always the same distance and required to be used with relative precision despite that. It took a long time to load but actually ran quite well. One curious thing is that it looked weirdly blocked out, and sure enough the 2x view was smaller than my monitor's full screen resolution but only slightly, so in full screen everything was stretched a bit weird. That all might sound a bit major but like I said this seems slick and I like it. In particular it seems to be another deep and expansive game, but it didn't give me a feeling of being overwhelmed by choice like some games.

I've been hearing a lot of complaints about the Enter key being used to Pause/Unpause. When I first got into gamedev it was the standard that nobody batted an eye so it always struck me as odd. What's a more acceptable Pause/Unpause key used these days?

I would say Escape is typically the standard, that goes back to Doom if not further.

---IMPORTANT FOR ALL THOSE WHO PLAY WITH KEYBOARDS---
If you are experiencing problems using the hammer, change the controls in the options menu so that Attack and Dash are bound to different keys.

Had some time today to give your demo a try! Didn't get particularly far - only a few save points in, but I've got some feedback for ya

The ambience of the game is nice - the music and foggy caverns gives it a very mysterious Metroid feel. The overall environment art and player art is nice, but the mixed pixel sizes really hurts the experience. I would definitely recommend making the pixel sizes more consistent. You've got what seems like 6 different pixel sizes on one sprite and it's jarring.

Another nag I had with the environments was that the functionality of the blocks was very inconsistent. Some of the blue square blocks can be broken, some can't. Some are solid, some you can walk right through. For a platformer, the player should be able to instantly translate what is a platform, what is a hazard, etc., so I would advise making those more consistent. If a block is part of the background, it should have more muted colors or lower contrast or something to differentiate it from a foreground object.

The main reason I stopped playing though is that I don't feel like the combat is very fun, or very satisfying. One big reason for that is that what happened when I pressed X seemed to be completely unpredictable. Sometimes the hammer would swing and I would be stuck in place until it finished (which is what I would expect from playing games like SotN), but sometimes I could still slide around. Sometimes swinging locked me into dashing forward, sometimes I did the dashing/swinging animation but was stuck in place. Sometimes the swing animation would play twice (it would get about halfway through and then start over) and sometimes it wouldn't play at all. The inconsistency of the weapon functionality combined with how enemy attacks are basically just them flopping all over the place made it so the only real tactic I could figure out was to just stand in place and spam X, which seemed to hitstun enemies enough that I could just do that until they died. Maybe I'd get hit once, but they'd always drop a health/money item.

I would really suggest you spend some time playing Megaman X4/5 as Zero, or maybe some of the SoTN-esque Castlevania games to get a feel for a melee-combat focused platformer. Megaman X4/5  as Zero would probably fit the pacing of this game a bit better, but I feel like Zero had some fantastic mobility and swinging his Z-Saber was satisfying and consistent.

Additionally, I couldn't figure out how to get into the menu at all. The only way I could seem to pull it up was by Left clicking, which is weird for a keyboard-based game. Why not escape or tab?

Overall I think the game has a great tone and is very promising, but the combat needs some big-time polishing and some consistency in the visuals would go a long way to help this game feel much better to play.

Thanks for the feedback man, I immediately went back and checked the game to see what the problem was for the controls. I used my controller and it felt fine, but when I used the keyboard, I immediately understood what you were talking about with the attack animations working wrong. That'll be a high priority for me to fix. You use Enter to Pause/Unpause btw. It's very much more a controller based game than a keyboard based game, but you're supposed to do everything the same on each.

I can get what you're saying with the graphics being insistent, the collision tiles would be easy as just changing room tiles to better represent a ruleset for the area. As for other stuff, a lot of things in the game got edited in iterations while others were ignored, but what would you suggest I put the highest priority in redrawing?

Ah gotcha - I'll have to try it with a controller!

I think what stands out the most to me in terms of art was the first enemy you come across - the little bug guys that leap at you. They felt out of place, but that might've just been the animations, or maybe a lack of detail compared to the player character? I dunno. The room tiles I think would help alot - some of the dirt/stone details looked weird when some of it is just like, a thin line instead of chunky pixels.

That's really helpful thanks. Sometimes you just don't notice certain things when you're doing almost everything yourself. I added an additional sign in the tutorial area explaining how to pause and unpause the game as I've had people in the past complain about it as well. What I figured out with the keyboard controls was that in a very old build I had attack and dash bound to the same key and the game was designed around that, but now it's definitely not. I thought I fixed the default controls so that you used X to attack and C to dash but I guess not.