A world- and population-building game in an unprecedented number of dimensions.
Submitted by horrible — 2 days, 12 hours before the deadline
Add to collection 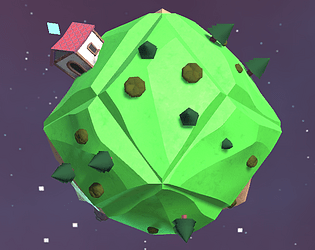 I was confused as hell for like 10 solid minutes before I started figuring stuff out. Clicking stuff is kind of hard for me, sometimes it takes a double click, and sometimes it doesn't, so I end up randomly placing too many tiles in some spots. I like the art you do have and the music though, and I think the mechanics are interesting as a starting point. As phil pointed out, specifically having to close each shape seems kind of unnecessary; I'd like to make large planes or weird stuff that doesn't have to close.

Glad you enjoyed it. I'm still desperately trying to figure out why you have to click repeatedly.

Cute game! It reminds me of a prototype city builder/gardening game I was playing around with.

Some notes on your current stuff:

Thanks for the feedback, I've already been addressing almost all of these points. You can rightclick in build mode to switch between the possible panel orientations but I've noticed people still struggling with it, so I'm planning on adding some AI that can predict where you would want to build you next panel. I've been also thinking about ways to encourage building unorthodox shapes - I might drop the "build a complete solid to get access to resources" completely and think of other ways how building styles affect the growth and behavior of the population.

The villagers are all running for the same faraway tree because they don't consider walking distance and other villagers already occupying the space - basically lazy AI. I have some plans on how to make it more organic, including a revamped resource system not tied to the player, but to the buildings instead. Thanks for the tip about enabling run in background, I very much want it to be a game you can have going in the back so that will be important.