Defend a village of nervous farmers from an attack by desperate bandits!
Submitted by benhem — 11 hours, 36 minutes before the deadline
Add to collection 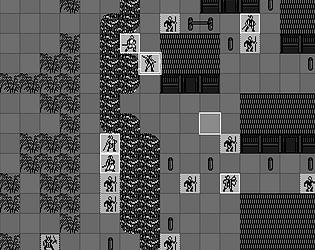 Submitted
The Forest Moons of Yendor
LikeReply
ClassicwookSubmitted1 year ago(+1)

This is awesome! I had images of the film in my head the entire time. This is a great example of how important theme can be for gameplay. There were times I wanted to save the samurai from death but chose to protect the villagers instead. It was sad but it really put me in their shoes. Great artwork too, nice touch going gray-scale.

One weird thing was the turn speed controls. I'm not sure what I did wrong but the more I messed with the speed controls the slower the game got, even if I went the opposite direction. A visual representation might help?

Also do the villagers ever attack, or just defend?

Thanks for making this game, it's really fun. Something I'd love to play on work breaks.

Hey, thanks for the kind words!  I love the film.  And it is definitely intended as a coffee-break game.

To answer your questions, left bracket does speed the game up.  You do need to tap the key a few times, rather than hold it down, which I should probably make a note of.

Farmers do attack bandits, often successfully!  But there are some complications.  One is that they won't attack if they're afraid.  They become afraid if they can't see a samurai in their field of vision.  The other is that five of the bandits are wearing armor and carrying better weapons, and the farmers aren't much of a match for them.  Armored bandits are a serious threat and are best dealt with by luring them into positions where they can be struck twice in one turn.

The odds are always against you in this game, as the war-weary Kambei would tell you, sighing and rubbing his head...