Play as an elite hacker in this drag-and-drop programming roguelike.
Submitted by plasmastarfish — 2 hours, 17 minutes before the deadline
Add to collection 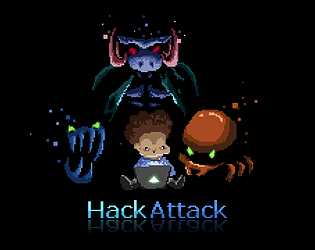 A really great looking game you've made here!  The pixel art is really well done, and I *love* the music track, although it got repetitive after a while.  Is there any difference between the characters?

The UI seems to take up too much of the screen, hiding enemies in the corners.  I larger vision in general would be very nice because the game could be played faster if you didn't have to worry about a new monster appearing a few tiles away after every move.  I do realize that the screen is the size it is for balance reasons though, since enemies aggro when they enter the screen.

Maybe I didn't get deep enough, but I had a feeling of "aimlessness" wondering if I'd hit the end at some point or if the dungeon just went on forever.  I have a feeling it actually does end here, but even a one-line message at the begging to shed some light on the plot/goals could go a long way.  Also a floor indicator would be very nice.

Was the lack of health drops a balance decision?  Mistakes are very punishing but I assume that is by design, especially with the deterministic combat system.

Is there are reason there are no combo pieces for left and right movement?  Or did I just get really unlucky with finding them?

It would be nice to start with a few combo pieces or get a few guaranteed on the first map.  It was confusing to figure out how the system worked, especially because most games don't seem to find a piece on the first map.  Maybe even just an indication on the combo edit screen that tells you to find more pieces first  :-)

Overall, a great looking and well-polished game, but I'd love to see a little more to give the player a sense of purpose instead of just dropping them into the dungeon.

By the way, I got the starting map below which was very annoying.  You can use a combo to escape the spikes, but if you don't have the pieces or if the other side is blocked by the wrong combination of enemies, then you will probably take a decent chunk of damage. 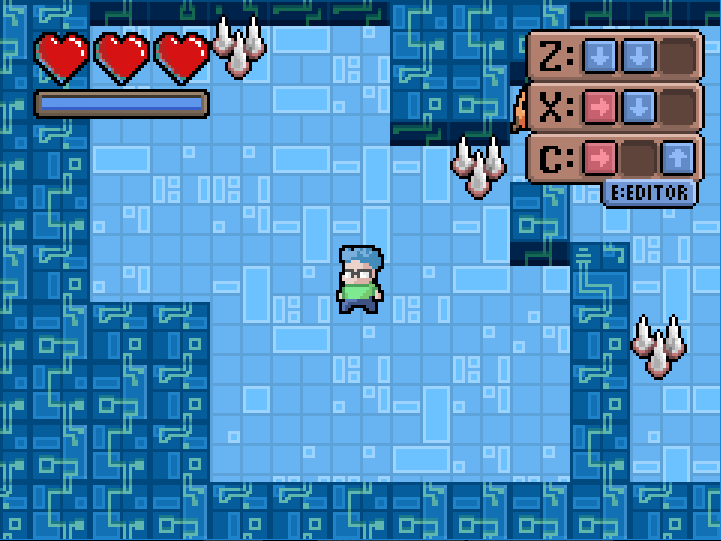 Thanks for the playthrough! It was a fun project and I'm glad you found some parts you enjoyed.

A lot of the pieces you mentioned (health drops, spike spawning, and level counter) were points we noticed but ran out of time to fix. Our team was primarily two people, and we're engineering students full-time.

I definitely agree that a cohesive story would add a lot, and we've discussed adding boss floors and actual plot elements --- we actually had some idea of a story, none of which ended up in the game or Itch page in full.

Sorry to hear you didn't get left/right combo pieces, it's all on a random number generator! Making the first few levels deterministic would definitely make that system feel a little nicer.

Once again, thanks for playing and for the feedback! I think we could have gotten away with less polish for more features, but it was a fun experience and we got the opportunity to make a thing.