My entry for the 2019 7-Day RogueLike game jam
Submitted by uberdroidgames (@CaptainZeroGame) — 8 hours, 41 minutes before the deadline
Add to collection 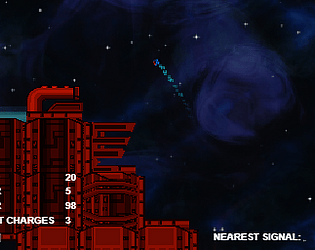 Great game. I just wish there was sound.

Thanks!  Me too!  Still working on the sound.

For some reason for me the "full screen" button is gone.  You really can't play it not full screen because then the mouse wheel scrolls the page instead of zooming in and out.

EDIT:  It's back.  Wonder what happened?

EDIT AGAIN:  OK I just made it only run in full screen so no "fullscreen button sometimes" bug

Also there seems to be a really intermittent bug where if you destroy 2 of the junkers, you win.  It's supposed to be 4.  Sometimes rarely, a space monster *can* destroy a junker by itself.  This doesn't happen often so I left that in.

Ugh that bug is vexing... Lots of times when you destroy one it blows up other ones too for no apparent reason.