Brace the wall and take a leap to fulfill your dream.
Submitted by Brantly McCord (@brantly_mccord) — 3 hours, 35 minutes before the deadline
Add to collection 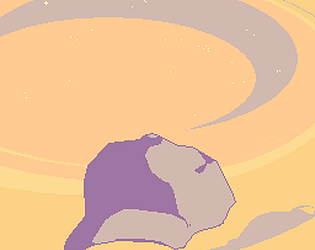 Gameplay Instructions
Keyboard is required: hold Spacebar to build up strength for a jump, then release to leap. Escape exits the game, and the R key can be used to restart the game on its end screens.
Additionally, one portion of the game highly requires audio to hear a cue for an obstacle.

List any content that was created before the jam that was included in the final submission.
The gameplay premise (using wind to pin the player up against the wall, allowing them to jump up it against gravity) was considered before the jam, but all surrounding aspects (its narrative thematic purpose, programming of the premise's mechanics, graphical style, etc) were handled solely during the jam.
Two free sound effects were found and gathered during the jam (from freesound.org, users mzoern1 and dheming), but these sound effects were created before and externally of the jam setting.

Your game was short, sweet, and beautifully made! While I finished it quickly, I thoroughly enjoyed it! I especially enjoyed the story you told with no words. Awesome job!

Thanks so much! Believe me, I don't take the compliment lightly!

Awesome! I don't take that compliment lightly either! I look forward to hearing what you think!