An Action RPG and survival-horror adventure
Submitted by Netherware Entertainment (@Netherware) — 17 days, 9 hours before the deadline
Add to collection 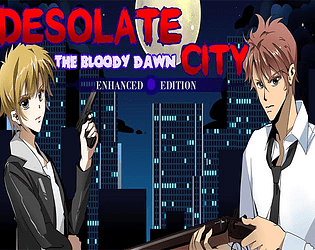 I really like the presentation and Resident Evil homage, but I have a BIG problem with the gameplay.

The feed back from hitting enemies is good, but everything else has problems. The pause after being hit and attacking is very punishing and, due to the amount of enemies and wide open areas, means you get swamped by enemies very easily. I know I keep on bringing up Resident Evil, but it's a good example of what you seem to be going for.

Let's take a look at how RE does things: in RE, you rarely fight more than a couple of zombies at once also most environments are very small or hallways. This means, even though you have the same stun from being hitting and attacking that you have in your game, the player is punished less for making a mistake. If you mess up a swing, you're likely to get bitten, but only once and not by multiple enemies. It was pretty easy in your game to get surrounded and hit several times before I could react. If this game had less enemies or tighter environments, I think it would feel much fairer.

As it is now, the only effective way of playing (imo) is to run past everything and only hit stuff when you get stuck in a cubbyhole or something. It's more like I was playing Pacman instead of a tense survival horror. Anyway, I felt the game was more unfair than hard. Sorry if I'm being harsh, but I saw a lot of potential that was ruined by poor enemy balancing.

It's almost a great game and I'm only writing this much because I'm frustrated at the lost potential.