Omg I love them already!

This was so cute! I got really excited when you first posted about this, and I'm glad it was worth the wait! You always make such amazing games and I can't wait to see what you make next!

I'm screaming!!! I thought this project was dead! I'm so happy there's an update! I'm downloading it right now.

I loved the first demo so much, and I'm really glad to hear there's still work being done on this! I'm sure it'll turn out to be an amazing game!

The new demo options made me think of some questions. Like, if you picked all the scar options, would people react differently than if you just picked one? I'm really interested in seeing how some of these different options are mentioned in game.

I'm picking the cafe job this time and I'm already happier with it. I got the bakery job on my first play through and it didn't really turn out the way I was hoping. Not in a bad way, I liked the plot, it just wasn't my thing.

One other thing I noticed this time around, was I missed out on a lot of the dream scenes because of the dream setting combination I picked. One dream I actually liked had two tags I switched on, but one I originally didn't, so I never got it on my first play through. I think it'd be helpful if you made it more clear that you should probably only turn off tags you REALLY don't like.

Overall, I'm still very happy with the game and I'm looking forward to seeing where it goes next!

Hi, I don't normally comment on these sorts of games (for obvious reasons) but I thought I would this time. (sorry for the long comment) I'm a lesbian, and while I liked some of the yuri routes in the game, I couldn't help but feel like the game still leaned more toward het scenes. (I'm writing this after my first play through of version 0.16.65) What I mean by this is that, while there are yuri routes, there isn't much yuri that appears outside those routes, and if there is I couldn't find it. For example, while there were plenty of opportunities for you to act "slutty" toward random men, I didn't get any chance to do that to women. It kinda left me waiting to get to anything sexual at all, and made it very hard to get my corruption up.  I think if you added more random events with women, it'd really help sell the game to me. Like, when those girls come by and ask if they can copy your homework, maybe after a few times add a scene where they offer something in return? I know the "please add this!" comments can be a pain sometimes, so I apologize, but I just thought I'd say something since it'd make a big difference to your lesbian players.

I loved this so much! It's just a calm little game that helps you forget your worries for a moment. I felt so relaxed playing this, and I can't wait to see where this goes!

He is a good boy who loves his birbs <3

Also, I didn't include this in the first post, but the stopping point felt very natural. I know you guys didn't plan on making two parts at first, so I thought I'd mention that.

AAAHHHHHH!!!!! I LOVE DIETRICH SO MUCH!!!! This whole thing was so good! It was such a sweet little story, and it made me feel like a kid again!

I can't wait for more, but I do hope you don't push yourself too much. I could tell you guys really wanted to get this beta out fast, so try not to put too much pressure on yourself for the full release of the first episode.

No problem! (Also you're right, it is diner, I misspelled XD)

I enjoyed this a lot more than I thought I would! I expected it to be quite short, but It was actually kind of long. I played through Lyell's route, and I really liked it!

The main errors I found (as of version 1.0) were that when Cecil was first introduce, Hazell shows up, but her sprite doesn't appear. And the other one I found was that in the first fight with Cecil, I think the instinct and reason choices are mixed up. You stay out of the fight when you pick instinct, and try to help Lyell against her wishes with reason. btw instinct is misspelled in both the fight scene, (And maybe others as well) it shows up as "instict".

I found a few logical errors too, when Lyell goes to Jamie to do... something... it's never actually stated what she needed to do there. Considering the conversation, it probably had to do with Cecil, but I don't think it's ever actually said. If it was I missed it. I also had a hard time figuring out how close Lyell and Jaylene were before the game. In the beginning nothing is ever stated that Jaylene knew Lyell from anywhere other than the dinner, but later Jaylene say's she's known Lyell for years. And even later, also says she knows nothing about her? I think I kinda get what you were trying to say, but it feels a little conflicting.

Over all, I really loved the game! and I'm really curious to play down Xanthe's route once that's finished!

I just played the demo and I really love this game! I've never seen a game that can allow me to be one gender at one point in the game, and then change to another later! Since it goes from childhood into adulthood, a mechanic like this really helps immerse me.

I do have one thing I'd like to ask though, will there be any female romance options in the DLC? I'm assuming not, but it'd feel nice to have that layer of choice too.

Also, I found a bug; during the Fireflies moment, Shiloh will call your mom Mrs. Last even if you change your last name to something different. 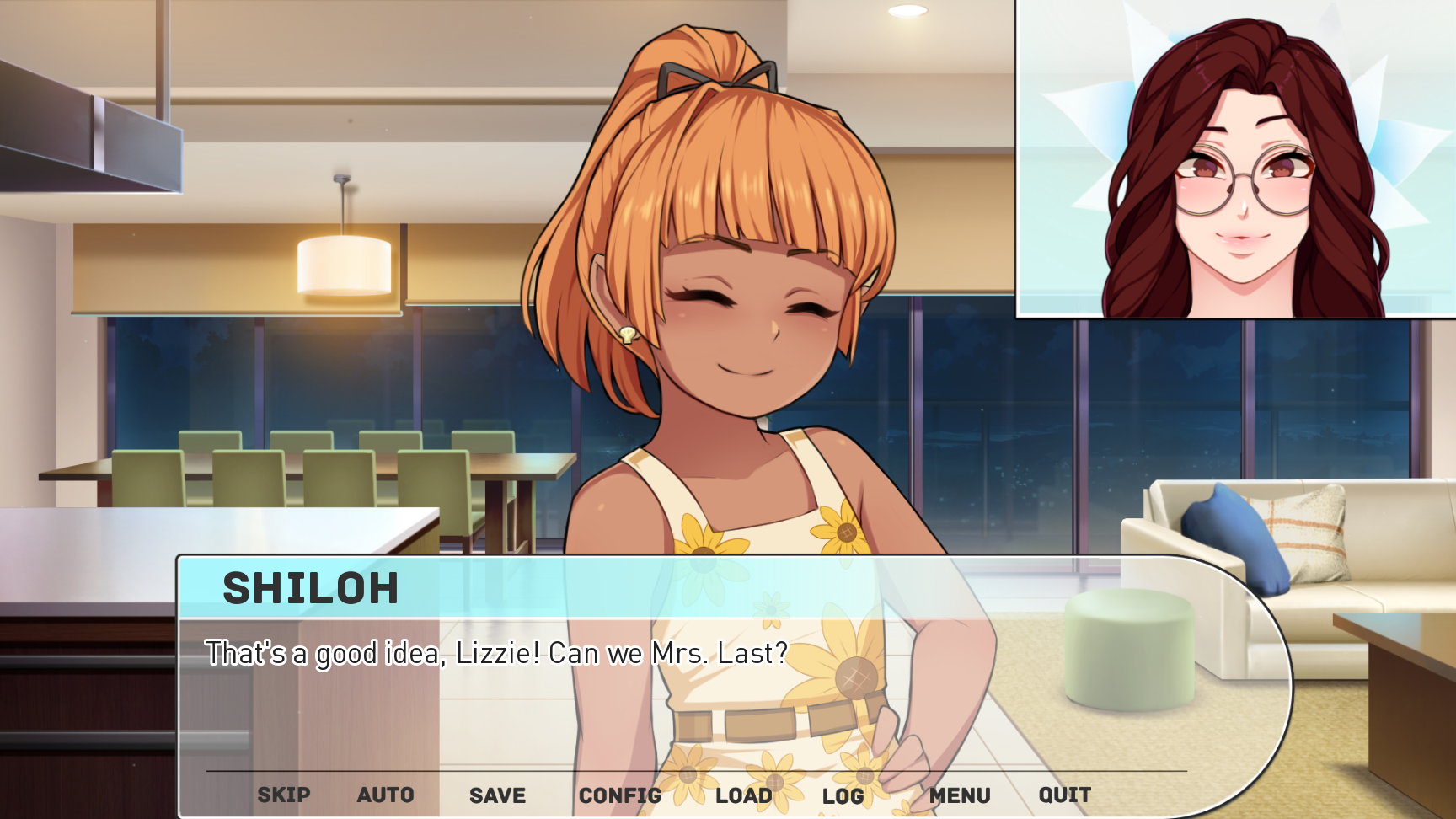 I was on the build 1.8.7, as for my PC's specs, I'm afraid I don't know. I'm not really a tech-savvy person. but I did try again and was able to get through it this time, it was very good!

I liked what little I could play of it; but it kept freezing at every scene transition, and I'd often get stuck on menus where the buttons wouldn't do anything. I really wanted to play more, but it was getting near impossible to continue...

that's a little disappointing, at least there are still 11 other characters to romance. Going for Sergio next, he's a cutie! <3

I LOVE this game so much! I was super excited for it to come out, and I'm not disappointed! only thing is I'm stuck on Nanako's route. I've gotten "seeking equilibrium" and "alone again" but I don't have "my big sister". and I'd also like to know one thing before I try again; judging from the placement of the "good" endings from the demo, it looks like "seeking equilibrium" is the good ending for Nanako, but I still never end up dating her.  If that is the good ending, I don't know if I'm going to try and find the other.

I'm so happy we actually get to date Trick in this one! I've always loved them! <3

I absolutely loved this game! only got one ending so far, but it's really amazing! Haru is basically me, so I really felt a connection with the characters!

REALLY great game! But I'm really sad to see how short it was, so I hope you make more! (I'm downloading the Halloween sequel as I'm typing this. )

Hey! played the demo and filled out the survey, but I just wanted to say you should add the LGBT tag to this game, it'll help more people find it! (I didn't even know it existed until today)

THIS!!!! THIS IS WHERE LESBIANS GO WHEN THEY DIE!!!! THIS SO BEAUTIFUL!!!! My favorite character is Diya, she's such a innocent cinnamon bun and I love her! <3

I was thinking about trying out this game, but I might wait until chapter 3 comes out. I was wondering if you thought that was a good idea, or if you're planing on pushing chapter 3's release past October?

I Love this game! I really hope you keep working on it! :)

Thank you so much! You have no idea how much better this makes me feel.

I noticed my original comment may have been a bit confusing. I was in the middle of having a minor anxiety attack when I wrote that, I feel I should clear a few things up. Like it said, it wasn't the suicide that triggered me; I even expected a character to commit suicide. I don't get triggered by hearing those things. I get triggered when something is threatening me directly, or is focused on me specifically, so the meta content of this game caused and anxiety attack. I had to delete DDLC, the zip folder for DDLC, and go into recycling bin and delete the both again, and then search everywhere on my computer for any file related to DDLC, and I was still having an anxiety attack. Point is, meta content can be a trigger on it's own and  I think if meta content was added to the warning page; and a Horror tag was placed on the game, it would help a lot.

I was looking for romance VN's on Itch.io and found this game. I saw the warnings, and followed the link to the warning page. Problem is, the warnings don't give you a good enough idea about what you're getting into. Yes, it DOES say "depression" and even "Suicide" but all that told me was the game dealt with heavy topics, it did NOT prepare me for the horror experience I was about to play. The game has a "Romance" tag and not a "Horror" tag. I get disturbed  by things like this very easily, and the vary dark and meta themes of this game triggered my anxiety in was I did not expect. If I had known what I was getting into, I never would have down loaded Doki Doki Literature club. This game NEEDS a "horror" tag. I don't want other people to get triggered by this game! I even made this account just so I could help with this major problem. Thank you for taking the time to hear me out.