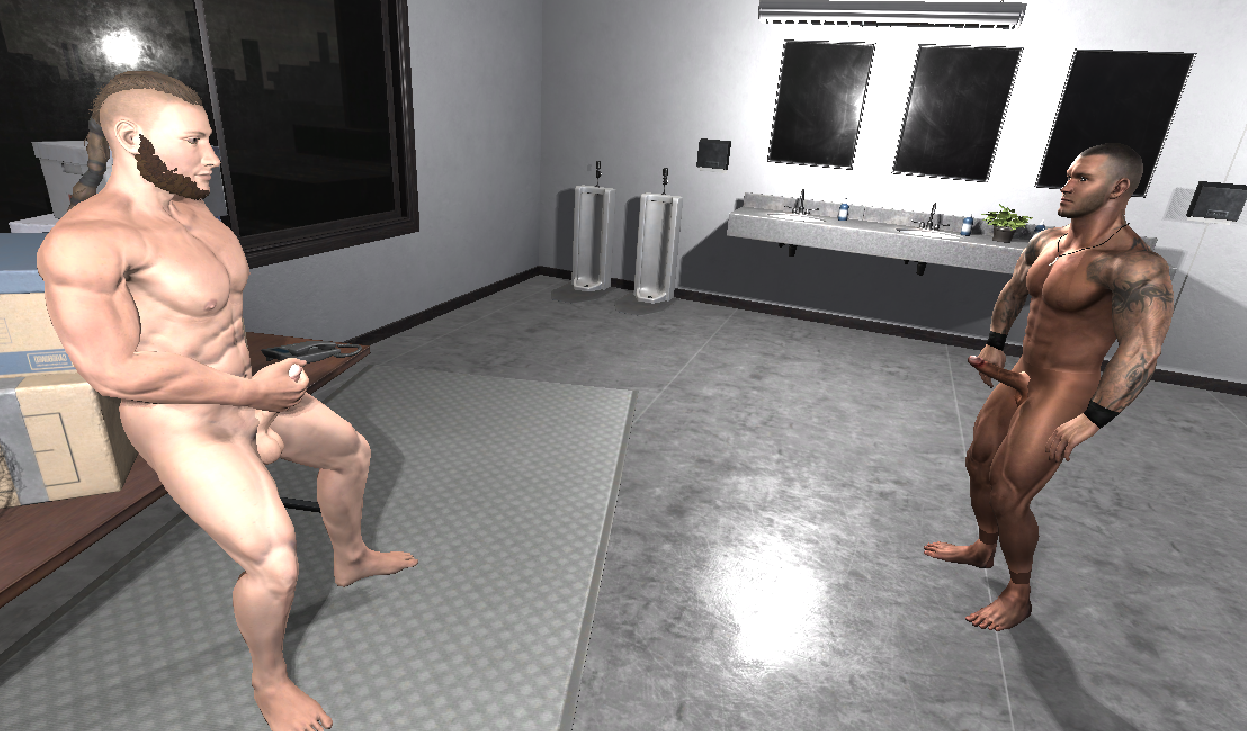 I'm working on a new game in a police precinct.

i'm trying to come up with a story to justify naked policemen dancing. Maybe I'll use coconuts again ;-)

walking on the coconut should pick it up automagically

Hey! I'm really happy that you liked the game :-) It was a one-man project, so it's a bit short. Maybe I'll start working on new chapters during my next staycation ;-)

they take a lot of time to make!.. I had to animate each bone. Even the one in his dick ;-)

Hey! I've just checked your profile on gaymeboys and I don't think that we ever met IRL, I was in Lausanne only during 2007-2013. I was an active member of plan-queer (the LGBT group on the unil/epfl campus). I mean... "active" :-P

I've never really tried anything with unreal. So far I only used unity (i think it's somewhat friendlier to newcomer). It's possible to make a reflective surface: apparently, you can take the standard bit of code in C# that deals with a water surface and remove some of the effects (to have a "still" water surface) -- but I don't really understand how any of this works xD (I guess I would not bother and just buy one... I've discovered that's, er, a way to solve a lot of problems in game development)

Ahahah browsing mmoboys is a great time-waster ^_^ It's a bit like ImaginaryGayBoners.

I wish I had found your book when I was still in Vienna, I was always looking for gay-themed sci-fi um mein Deutsch zu üben ;-) (There is a gay book shop in Vienna called Löwenherz next to a gay Café (Café Berg) I spent *a lot* of time there ^^ That's basically where I wrote my phd thesis too

Omg! The concept is brilliant! But now my neighbors think that I'm crazy

Thanks for the feedback on the controls. It looks like I should add a proper "option" menu with mouse sensitivity and key rebinding. ... But I'm completely hopeless at user interfaces xD (The speech bubbles in the game took me way longer than I care to admit ;-)

The game is made with the Unity engine, and so the characters + animations need to be imported from another source. The pipeline that I use for that was

So if I want to add more cloth options, I would just need to design some new character models in FuseCC, and then import their model in Unity, and they should work out-of-the-box (all the guys use the same "bone-system", you can use the same animations on all of them).

I've just tried your game (I had never heard of it before. How old is it??). As you said, the 3D environments are a bit... boxy and there isn't many people online :-/

I've never tried VR (I actually do all my gaming on a macbook xD), but that should be the future of virtual gay sex ;-) That's a new opening market ^^ (I think Unity support VR and it should be a "one-click" process to bake a VR compatible game, but I can't really test it :-/)

Thanks! ^^ I'm happy that you enjoyed the game (and sorry about the bug at the end: somehow it never occurs to me that people would add a space in their name. So the code carefully checks that the player does not use "fire" or "open" as a name, but if you add a space... the game just breaks :-/ I'll fix this in the next update)

I've been a bit surprised, but so far there hasn't been any homophobic comments. People are just okay with everybody being gay in my game. Actually, for all I know even people from Russia enjoy it, so... that was unexpected :-)

PS: the thumbnail for your video is brilliant ;-)

Thanks for the really funny vid! :-)

I've been following you for a while on youtube, so I'm happy to finally get my game "lumpsed" ;-)

...Looks like nobody likes Amulka: Rainbys wanted to romance the twink (or even the zombie!), and you preferred the bartender xD Maybe I should make an Amulka-in-underwear update (...but how to explain that story-wise? ^^)

wow thanks :-) I make my weird little games because I feel that at least one game like this should exist somewhere ^^

"My BF the Necromancer" took me about a month until I reached a stage when I was adding more bugs that fixing... So I released the game. I would like to add more chapters during my next game-dev phase ^^ Like a "Chapter II: How Amulka met PlayerName for the First Time" by building some cave levels. Giant spiders could be cool? And Igor before he got zombified.

Hey! Thank you so much for the comments & the video :-) It's always fun to discover how other people interact with the game... And it leads to stressful moments: like "Omg! The hitbox of the firewood is too small!! Is her water spell going to hit it?? Omg! She pressed on W + A too long! Now she is out of spellcasting!! Nooooo!!" ... So intense!

With Amulka, it's a bit of a hit or miss. Some people like him, and some other would have preferred to date another character (But sadly nobody for Igor yet ;-)

The dialogue system is a bit too limited to let the player choose between different romanceable characters, but maybe I could put some customization options at the beginning... but the game is actually based on some story I wrote when I was a teenager ten years ago and I kinda want to stay true to it. Actually... I just wanted to make a game that the teenage me would find cool ;-)

Hey! As QueerlyRepresentMe wrote: the game is set in an alternate universe where all characters (including the player-character) are gay.

There is also magic & dragons & zombies.

Thank you very much for your comments!

(1) It would be great if a native english speaker could look over the dialogues (I'm actually a french-speaker). Do you have an address where I could send them?

(2) Yeah, I implemented a check: if the player pressed on any of the movement keys for more than 0.4 sec while in spellcasting mode, the character goes out of spellcasting mode... The issue with the WATER spell is that both W and A are movements keys. Hum, I guess I'll have to add some extra checks in the new version to cancel the countdown to 0.4 if you switch keys.

(3) The "ESC + no quit" only sends you back to the beginning of the current scene (So you don't have to restart the whole game). I added this mechanics to get a way for the player the restart a level if he somehow gets stuck (....I had a bad accident ingame with a sarcophagus lid once)

Hum... With this system, I think that playing the game on a higher level of graphics could actually solve the bugs. (From what I see in your video, you were playing in simple graphics mode).

Anyway, I'm uploading a new version that (maybe) will alleviate some of the problems.

Thanks for the video! What are your system specs? The walk speed is clearly off (and well as gravity apparently...)

I hope you're gonna like it ^^ (If you find bugs-> zackkraoulinc@yahoo.com ;-)