This looks super fun! My only question after my initial skim is whether it can be adapted to run a Pokemon game directly--mainly through a catching mechanic. I've been searching around for something to run a Pokemon game that's a bit simpler than PTU, and this does seem promising, but I fear the game design may become bloated with multiple monsters per character. Thanks! 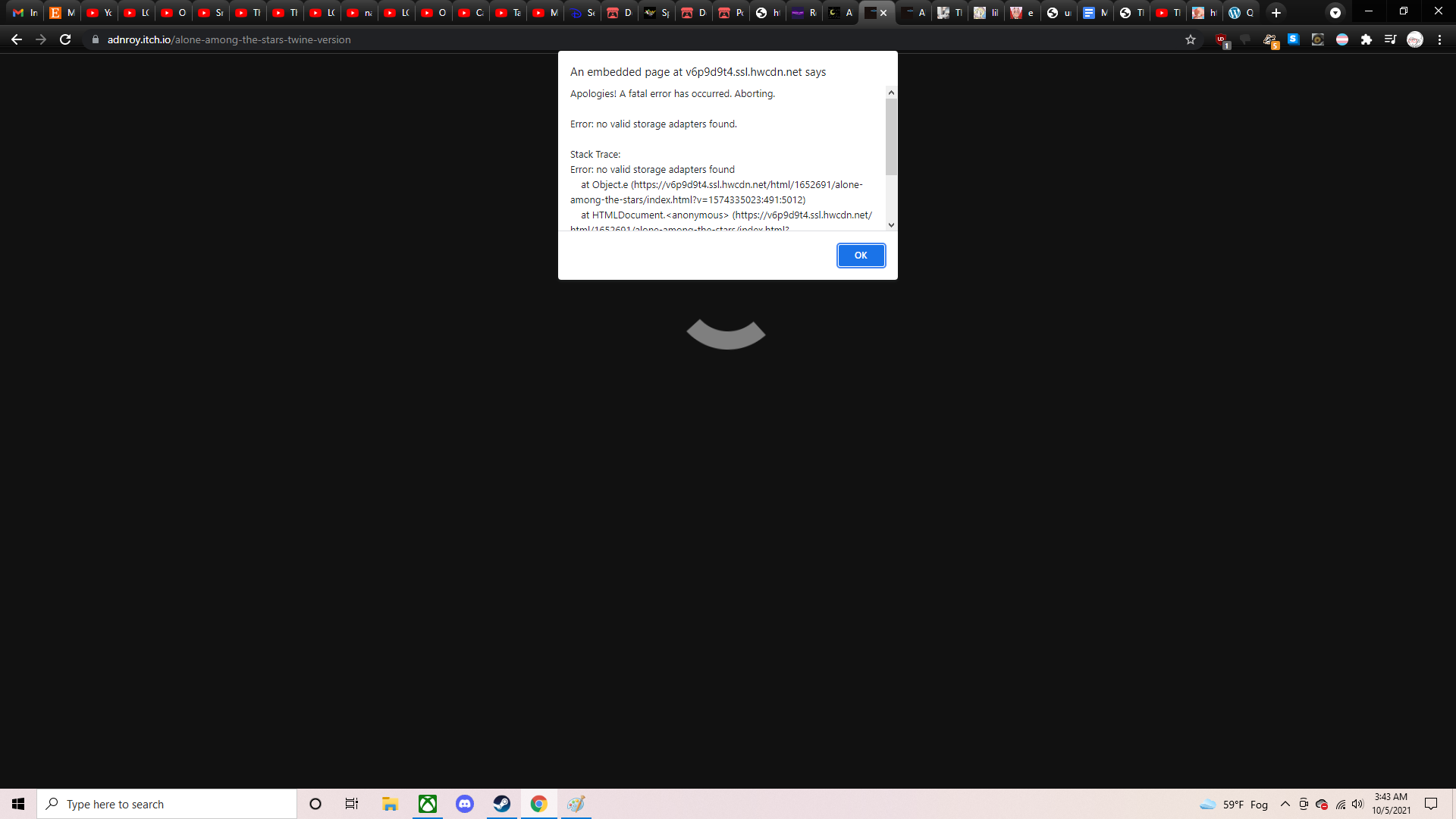 Here's a screenshot. Maybe it's on my end? My browser has been running for a few days.

The game doesn't seem to be working for me--desktop computer, Windows 10, Google Chrome (presumably it's most recent version). It says there's a fatal error and just refuses to do anything. It's sad bc I always loved coming here to relax--would love to see it up and running again ASAP!

I love this game so much, it's so cute!

Cannot believe this has been slept on for two years, this is an incredible first project! Have you ever considered making more games? You clearly have a talent for it! I'm glad to finally have a svtfoe game to feed my hyperfixation, also, lol.

wait holy shit did someone finally have the big brain idea to simply do the storytelling that has more thought than slapping a skill list on the PHB and calling it a day AND the crunchy combat. you have saved so many lives from DnD Hell today

I'm really loving this! It has such an amazing vibe to it, and is exactly the kind of fantasy I've always wanted to RP and write about. If I may ask a question, though--is there an 'optimal' point to convert traits into powers? Or is that all part of the narrative and when it feels right like most things?

I just wanted to let you know that this is my favorite TTRPG of all time. Seriously. So simple, and yet so flexible. I have always wanted an RPG that works for multiversial world-hopping adventure, and this is finally the one. Thank you for making this.

Alas, not yet, but I'm sure the cards will be kind to me soon enough. Keep making games!

Absolutely beautiful game, and easily my favorite Wretched & Alone game. The only one I really replay. Probably because it's the one I most relate to--the themes are clear and visceral.

DISCLAIMER: During the COVID-19 pandemic, I found myself quarantined with the director of this film, Adam Driver, for several weeks. However, I think you will find that this is little conflict of interest, given my opinions. It will be impossible to talk about some of the aspects of this film I found particularly troublesome without delving into spoilers, so the short of it is this: Terrible film that you should skip for the sake of your short time on Earth and your sanity.

Ceres, former actor Adam Driver's debut into writing and directing, is a confusing, drawn-out, boring mess of a film that clearly has something it wants to say but an absolutely horrific way of saying it. I am convinced that the script of this film would not have left the slush pile if not for the name of Adam Driver. It is filled with the hallmarks of amateur writing--an utterly unlikable protagonist, themes with the subtlety of an atom bomb and the clarity of jello, and an hour-long dream sequence.

And past all that is the elephant in the room--an absolute abandonment of any attempt at historical accuracy whatsoever. Now, I am not generally a big stickler for getting every detail right (particularly since this film does have fantasy elements--more on that later), but I do at least generally expect an attempt to be made to get the time period right. But the setting of a settlement on the edge of the Roman Empire (attacked and taken over by vague "barbarians" about twenty minutes into the film--something quite troubling to see in a film that has released in 202X, even in the context of the Roman perspective) is completely unbelievable. It is clearly trying to shove in a metaphor for the modern charity industry and its contrast to proper welfare, but it just doesn't fit in the ancient setting. It's such a poor fit that it has to come down to essentially portraying the Roman Empire as a Marxist state--a bizarre choice which I can't even begin to unpack. It's clear no research was done at all.

Of course, I can't discuss this film without addressing the full hour-long dream sequence in which our protagonist, Julius(played by Adam Driver), is forced to reckon with the titular Ceres (Daisy Ridley), Roman goddess of agriculture, who spends the time haunting him and lecturing him about the moral importance of helping the poor. Not that he doesn't deserve the lecture--despite being a soldier who is tasked with giving Roman citizens the crops they need to survive, Julius has all the care for the "weak and undeserving" (quote) of a French royal just before the Revolution. It's clear a redemption arc was attempted, but he legitimately neither does nor says anything remotely redeeming the entire first two hours of the film before he is visited by the goddess. I thought perhaps their previous work on the Star Wars films would provide even a hint of chemistry between Driver and Ridley, but this was quickly dashed by the hour-long lecture and the clear look of distress on Ridley's face the entire time, as if she didn't want to be there.

This is followed by Julius praying for salvation, fully Christian style in a blatant misrepresentation of Hellenistic beliefs, and being answered by Jupiter (Sean Bean), who strikes down all the barbarians with lighting. This is meant to be his redemption--enough of a redemption that he deserves to then become the settlement's new ruler. That's actually how the film ends. It's an absolutely surreal mess and a waste of three hours, as well as perhaps being the most boring piece of media I have ever consumed in my life. I urge you to skip this.