Runemage
You enter the astral plane as a runemage apprentice. Can you master the power of the runes and overcome the challenge?
Yrgo_Game_Creator
Action
The Lost Skywhales
Engage in a beautiful world, solve interesting puzzles & meet creatures of the sky.
Yrgo_Game_Creator
Puzzle
Shop n' Zombies
A top-down survival zombies game
TrangN
Survival
Defender of the Relics
Defend the relics in the depth of the lost city of Atlantis
TrangN
Survival
The Tale of the Greenhouse
A greenhouse simulation in a magical setting.
Yrgo_Game_Creator
Simulation
Panta Panda
Be a good panda or the world will end.
Weird Little Games

You are a Gem too!

Thank you for playing our game and giving such nice and deep feedback here and in your video.

There is an unwritten backstory that is very shallow that we had in our design document. In The Tale of the Greenhouse, the world is taking place in hell, but this hell is full of greenery and is more like a jungle. It is the hell vibe our name "Magmaplant" Studios comes from where a magma plant could maybe be something that could be found in this world! All creatures are our own hell fantasy creatures.

Yey, I watch the stream! So happy you played it and wanted to share it on twitch and with us.

The majority of us are actually working on a new title right now but I can't tell you more now, but soon you can see what we are brewing  :3c

Thank you IndieJunkie! We are taking that as a very good compliment. Awesome that you wanted to play and record our game!

Hi Bakidasu! Thank you for playing the game and thank you for your feedback.
If we have time in the future we make sure to check if we can solve that trouble with the shears ^_^

Thank you delenn13 for posting about our game! It means a lot.
It was a fun reading ^_^

Thank you diyanysus! We wish that too, but sadly we did not have time to implement that yet.

You have made the first video of our game what I know of so far. Special thanks for that!

Reply
itch.io Community » Game Development » Get Feedback · Replied to wildroseinteractive in Panta Panda: A game with goals outside of the game. Does it attract more players?
Weird Little Games3 years ago

Wildroseinteractive thank you so much for your feedback! The screenshot feedback is very important to me and I are going to see what I can do to improve.

I am happy you enyjoyed playing it and think it's cute! <3

Reply
itch.io Community » Game Development » Get Feedback · Created a new topic Panta Panda: A game with goals outside of the game. Does it attract more players?
Weird Little Games3 years ago

A couple of month ago I released my first game Panta Panda: a game about collecting bottles and recycle them as a red panda to prevent the world from ending.

With the release I also created some community goals. But I don’t have a community yet but I wanted to create goals that maybe would attract more players.

The goals are following (see the picture): 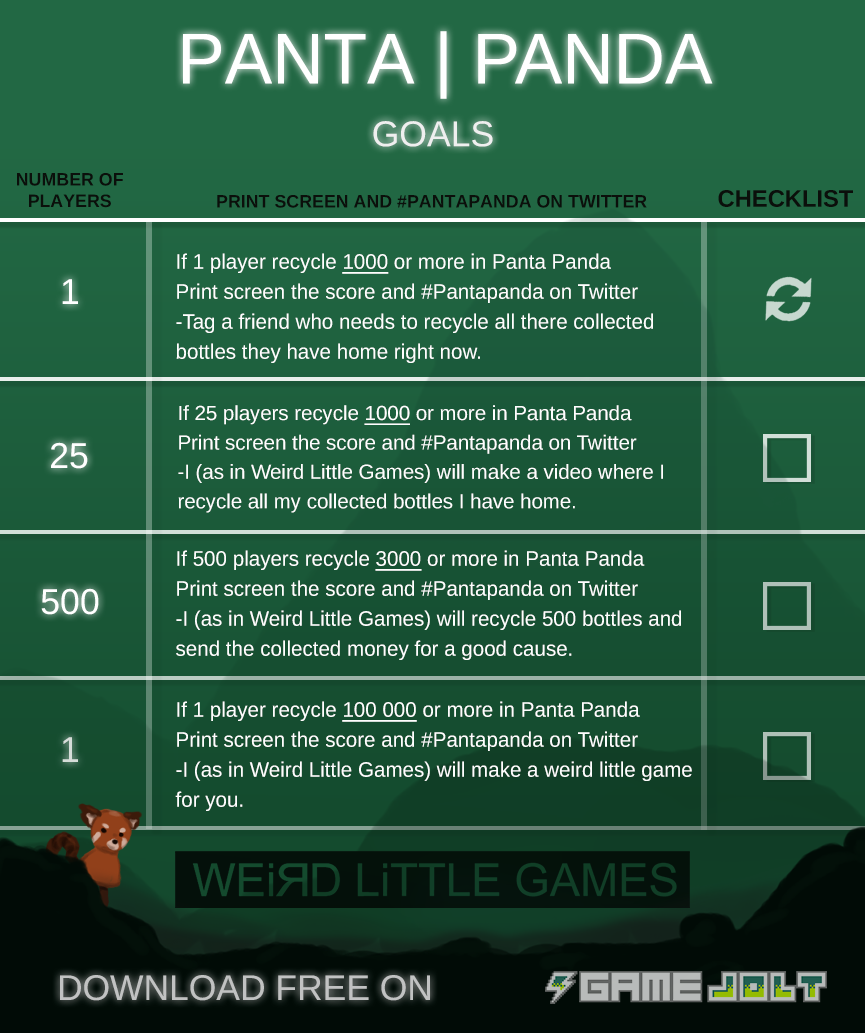 I would love some feedback on the goals. Are there confusing? Would you be interesting in being a part if something like this? Anything you can think of is of interest to me!

The game itself is downloadable here but you don’t have to play the game to give feedback of this topic if you don’t want to.

Thanks for reading, Cheers!