I Love the sense of scale here.

I wanted more games I could play with my tarot cards (I have too many).

I'm glad you're enjoying it!

putting this quote on the back of the box, thanks! 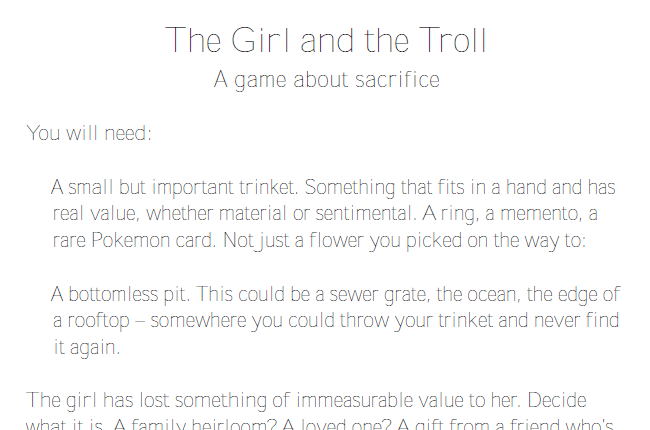 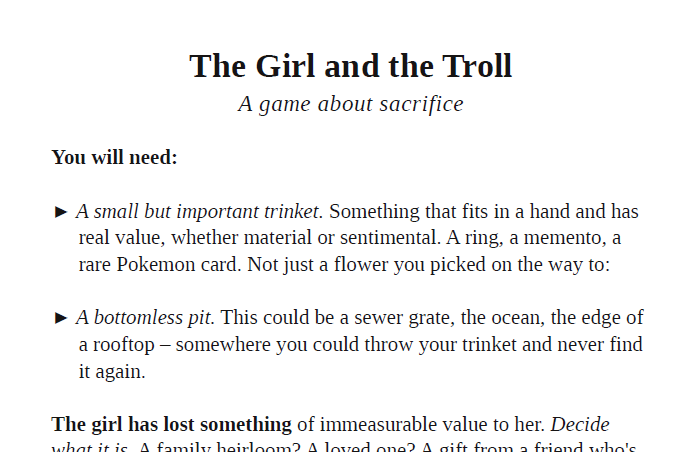 Thanks! I made it as a sample prototype of comedy game for my class.

Hey y'all! I'm finally ready to open up playtesting, holler at me if you want to playtest the game and give feedback!

I'll be demoing this game this Saturday at 3 P.M. at Bonus Round! Anyone in Chicago, it would be great to see you. 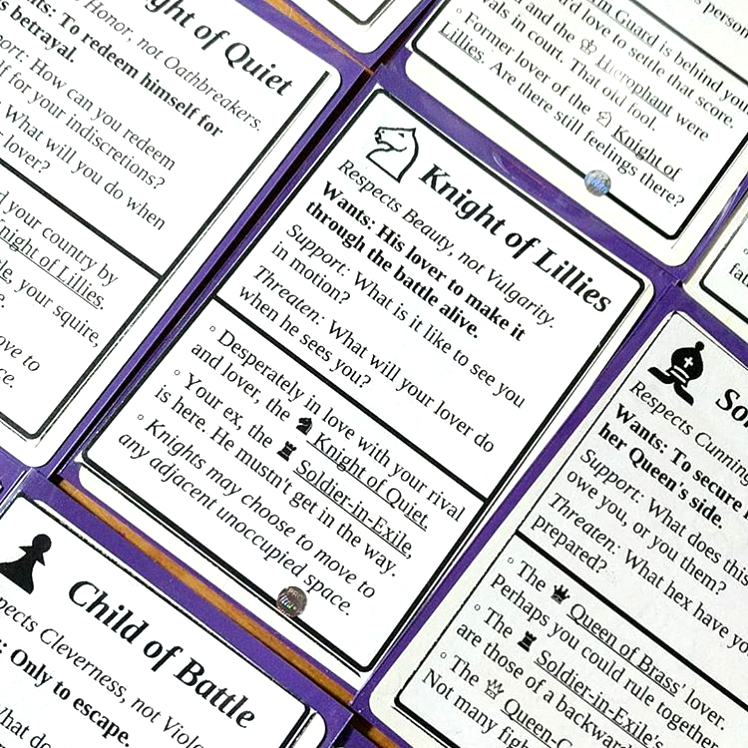 Updated cards for the second round of playtesting. The cards feature character information that guides role-playing. The original versions just straight up had biographies on them, which was a lot of information (and not all of it actually helpful). I've redesigned them a few times to make useful information more prominent, like the character's motivation / goal. They also contain a new mechanic I'm testing: character-building questions that are unique to each character, which trigger when the piece moves to support or threaten another. We'll see how well they play.

Chicago folks: I'll be demoing this game next Saturday (International Tabletop Day) at Bonus Round Game Cafe. Not sure what time yet, but I'll post it here when I know. 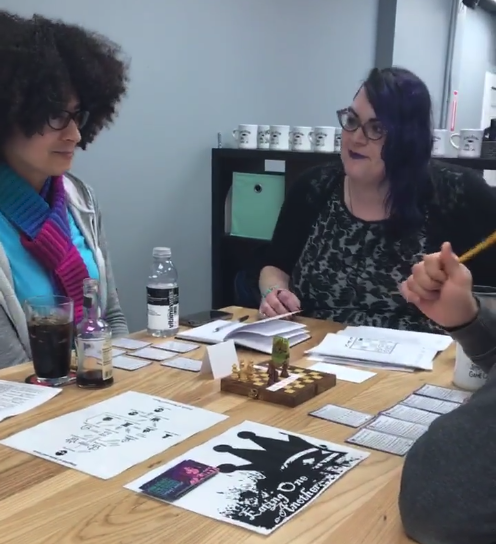 photo from last night's playtest! hoping to have a playtest kit ready and solicit playtesters soon!

Psst anyone local to Chicago, I'm going to be playtesting this at Bonus Round Cafe's Designer Night on Monday the 9th. Come try it out! 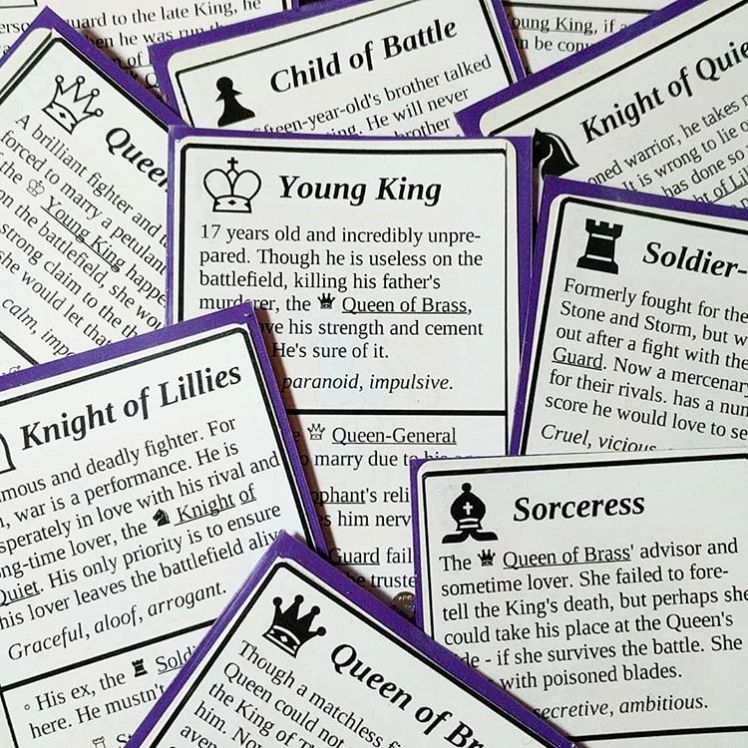 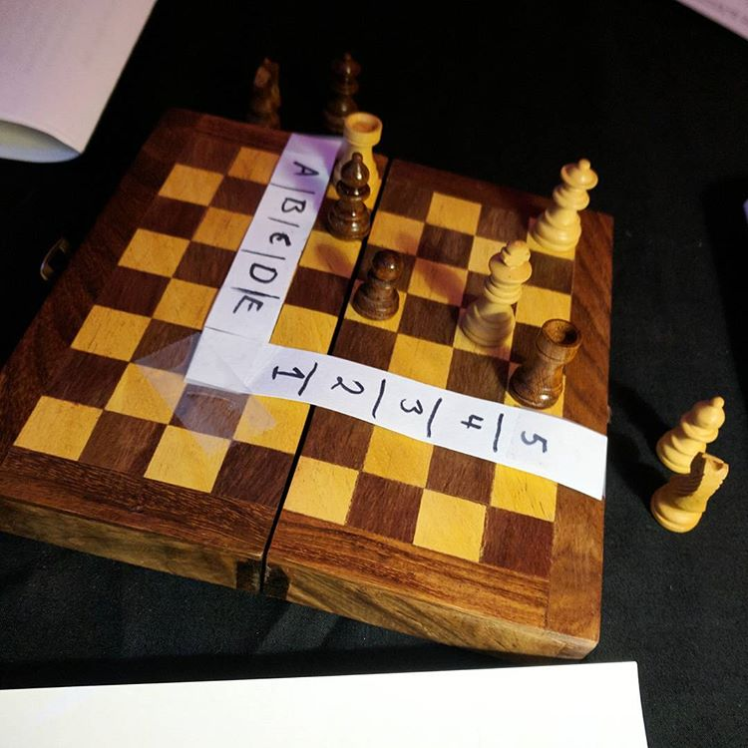 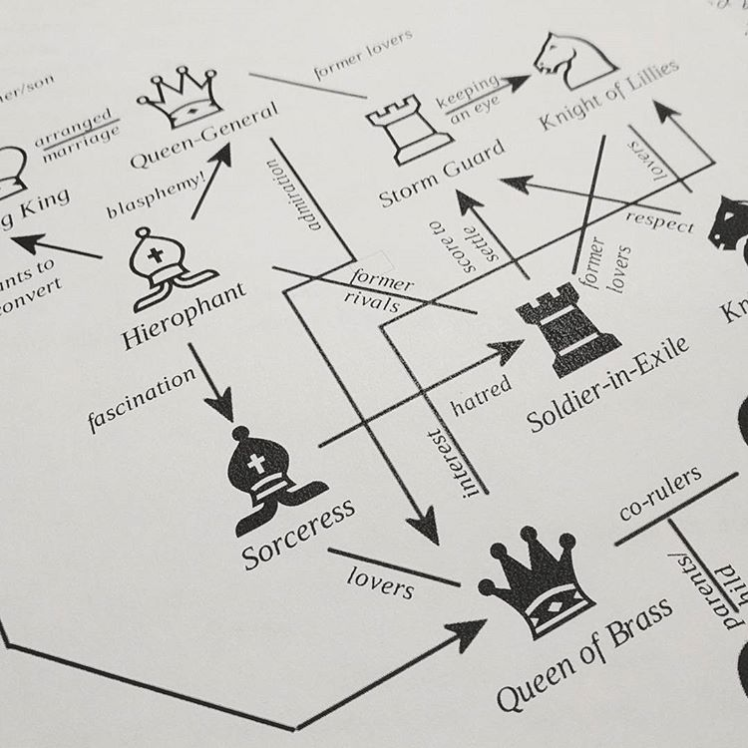 Working on a narrative game.

you know how in a sale you'll see the normal price with a slash through it and then what the sale price is and how much % off the norm that is? i want that except that it shows you're paying 80% more than the normal price. also it would be cool if people could see how long until the anti-sale is over. just like with sales.

that is, a sale that forces people to buy a game for higher than its base price?

windows 10 does this for a lot of small games and software. it's just gatekeeping.

how to make personal games

dunno if it's gonna be recorded but i'll probably post the slides!

i was literally just looking at the kickstarter (i was looking up the tiny swords itch page for a talk i'm giving on print & play games at the local library next week). i had no idea you were kickstarting a version until just now. congratulations! i still haven't actually played the game - i felt bad printing out the beautiful pastel cards on my black and white printer. so thank you for solving my problem, i guess!

Reply
itch.io Community » General » General Discussion · Replied to Potatoes Are Not Explosive in What is your favorite game?
anna anthropy5 years ago

perhaps it's your favorite game as well.

also hooray this is cool

is there a way to skip to the first unread post in a topic?

most of my sales come from twitter. don't launch a game on the weekend. early in the week is good. i have a list of press people i send free copies of stuff to, and i send them at least a week before the game's release date, so they have time to write something. be really clear about basic stuff about the game in that email, like when it'll come out, how much it'll cost, and what URL they should link if they write about it (itch is cool cus you can set up your game's page / url ahead of time, then set it in preview mode to show to press). again, don't send out those emails on the weekend. i've heard tuesday is a good day, because folks tend to spend mondays catching up on stuff from the over the weekend.

i have always sucked at marketing though so no promises.

Reply
itch.io Community » General » General Discussion · Posted in What are you playing this week? [Nov 30, 2015]
anna anthropy5 years ago

i am mostly playing neko atsume and the 3DS game where the rabbit tries to get you to give nintendo money and then maybe you win an imaginary sticker to put on your 3DS menu. i am really obstinate about playing free-to-play games for a painfully long amount of time without spending any money.

this is like...a pretty commonplace game theme already, no?

can this...be a general topic for promoting tabletop games / "physical games" ? i make those too! i do a game about designing magical fashion for witches and some little storytelling games.

it would be cool to see more print-and-play stuff and pdf-format rpgs (the kind you'd get on drivethrurpg) on itch. i wonder if "physical games" is the best catch-all name for this category? i noticed that the physical games page lets you sort by genre, but they're the same genres digital games get. ("role-playing" is still useful here, but probably "platformer" isn't.) dunno if there's enough interest in that part of the site that it'd justify changing it.

ANYWAY IF YOU MAKE TABLETOP GAMES POST ABOUT THEM HERE, ALSO UPLOAD THEM TO ITCH

hi i'm anna. i make digital games and tabletop games and i'm bad at sticking with online forums, but maybe this time will be different.