I've got good news and bad news for you!

The good news is that Layton will be one of two love interests in the post release DLC, Made Marion: Light and Shadow (the other has not yet been revealed).

The bad news is that you might not like him quite as much about five minutes after the end of the Sherwood demo.

And if it helps, Marion and Geoffrey's marriage would not have gone well if she'd made it to Nottingham on the Sherwood route. They need the events of the Nottingham Route in order to be compatible.

Maybe because a lot of us creatives aren't super pragmatic people? To be honest, I'm not either, but I've admired a number of other women who have that quality in my life, and I thought it seemed a very appropriate option for Marion. I've sort of designed her as somebody for whom practicality and heartfelt (some might say impulsive) action are in an internal battle, and several routes let the player decide which one wins out.

Don't worry, I'm quite aware of the issues around Marion's altered appearance. It'll all come out quite nicely in the wash (and is only an active issue in Geoffrey and Gui's route).

Thanks for the feedback!  There are narrative reasons for a few of the things you're wondering about, so they'll become more clear once you get into the characters' routes.

Marion is not meant to be a 100% self-insert character. She's more like a pre-created character that you're able to role-play through in-game choices to a certain extent. She is canon bi/pansexual, for example, and though that doesn't play much of a role in the routes in which she romances men, it's still who she is.

I wanted to write a story with a protagonist who has a strongly-expressed personality and a clear background. Because of this, she will have interests and preferences that differ from the player's. This is true of every visual novel, even the ones that actively encourage self-insert characters.  It's impossible to write a narrative that works for the preferences of every player, so the best I can do is try to be true to Marion and her story.

The dancing transitions are definitely something I'm still working on, as I'll be working with another coder who is more skilled at Ren'py animations than I am during full development.

Ooh, it's fun to see fans of the pragmatic route.  It's kind of the "Marion and Geoffrey vs. the World" option.

Wow, what lovely compliments from a fellow writer, thank you!  I hope I can tempt you to read beyond Geoffrey's route, because every route reveals a bit more about what's going on in Sherwood/Nottingham... and Alanna's is particularly unique so I'm hoping it'll be compelling even to readers who aren't romantically interested in women (you can always use the explicit text filter to skip the sexy bits).  But hey, even if not, I won't fault anyone for succumbing to the siren song of the Sheriff.

We don't have customization for Marion, and the blonde is a big reason why we don't.  You'll see when you play the demo... going live tomorrow! :D

Robin's refusal to take things too seriously and the giant chip on Will's shoulder are indeed meant to be character flaws. You'll get to know them both more in-depth in the full game.  Also, Marion lives in a much more dangerous world than we do and has dealt with bandits regularly over the last few years.  So she's better at keeping her head in this situation than you or I, though she's still pretty scared.

The new demo isn't out yet, but will be soon!  The new backgrounds in the featured screenshots will indeed be there.

Aww, thanks so much!

Note: If you're having trouble reading the character descriptions, try opening the image in a new tab.  You can also read the text separately in the original character reveal posts.  Meissa - Alanna - Gui - Geoffrey

Thank you so much!  We're working hard to get the Nottingham demo done so we can get ourselves crowdfunded and pump out the full game!

Aww, thanks!  We'll be saving itch.io updates for major release news, so if you'd like to read more, check out our Tumblr.  I've been getting a ton of asks since the demo came out so you can read plenty of things, both serious and silly, about the Made Marion characters.

We also have a Patreon that posts development sneak peeks at least once a week.

Thanks so much for your hype and support! Will may not show it at first, but he appreciates your support too.  ;)

Happy to be able to subvert your expectations a bit!  :D

Thank you so much!  I'm glad you're enjoying it.

Our crowdfunding campaign is tentatively scheduled for October, when our second demo is coming out. We'll have a better estimate of the final completion date at that time.

Layton Tuck will be a love interest in the game's DLC, which has a bit of a different structure from the main campaign and features two routes (Tuck and a yet-unannounced character) that are intertwined. The DLC will be a bit darker than the main game and is fully adults-only, because the story simply won't work with the explicit text filter.

Hi, that was me!  The otome reddit has been a great community of support for me as a dev, so thanks for being part of that!

Thanks! I'm afraid that Marion's appearance will not be customizable, in part because she undergoes a number of appearance changes throughout the game and adding player customs on top of that would have been prohibitive in terms of time and resources.

VC Games is fully in support of depicting a diversity of characters in our fantasy world, however, and hopes that players will appreciate that diversity through our overall cast of characters.

Hi!  In the final game every love interest's route has two possible good endings. How your romance progresses and which ending you receive depends on role-playing choices you make throughout the route.

For instance, Will Scarlet is a daredevil. If you pick his route, you have to decide if you enjoy jumping into the danger zone with him or if you prefer to be a more strategic decision-maker. This will affect how your relationship develops and the challenges that the two of you will face as a couple, leading to different kinds of endings. Hope that helps!

Thank you!  As the writer/programmer, I am so very happy to be working with our amazing artists.

It's true, there wasn't much chance to see Marion at her best in this demo.  In the full game, you'll be able to see her in her element during the prologue (which comes before the section of this game in the demo), and the demo leaves us with her just about to show off to the Sherwood boys.  It's not Marion's fault she couldn't do much to them... one is a hyper-obsessed archer who has been training with sword and bow since he was a young child and the other two have literal superpowers.  She still does fine against other mere mortals like herself, and has plenty of other skills that will make her useful to the Sherwood gang. Part of her character growth (especially on one of Robin's routes) is accepting that it's ok not to be the best at everything.

Marion does get to be the primary physical combatant in Meissa's route, as Meissa is not a fighter and recruits her to help assist townspeople who are caught in the middle of the struggle between Robin and the Sheriff.

The good news is that Layton Tuck is fully planned as one of two routes in a standalone DLC (the second route is a secret to everyone).  The DLC itself won't even be a Kickstarter stretch goal, but we'll probably have some kind of stretch goal related to it (free to backers at x amount raised or something).

Thanks so much!  I keep hearing that about Marion, ha ha.  We do have a female LI on the Nottingham side, though she's not meant to be quite the classic beauty that Marion is (I know Anna will draw her to be lovely, anyway)!

Our soundtrack is licensed from Alexander Nakarada, a talented musician who makes his work affordable for indie creators like me.  I'll pass on the kudos!

Thank you!  We hope you enjoy it! 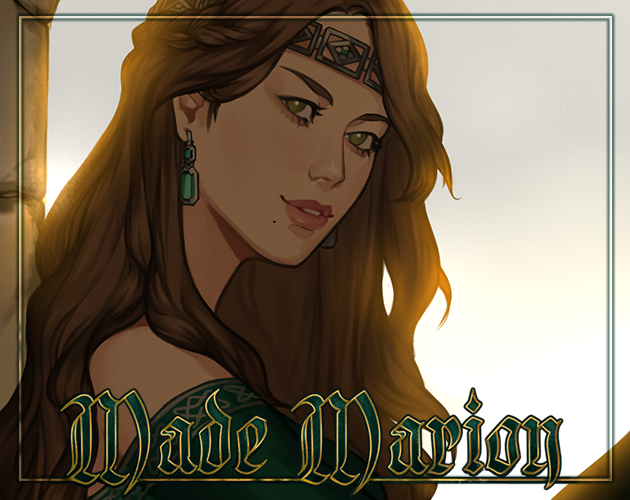 The tales of Robin Hood have inspired generations of authors and filmmakers.  Now it's time for an otome spin on the legends!  Play as Lady Marion, a proud and courageous young noblewoman whose mistakes land her in an arranged marriage far from home. Discover a magical alternate world where the Robin Hood story co-exists with powerful druids, mysterious fae folk, and dark conspiracies. Enjoy a more traditional, swashbuckling adventure with Robin Hood and his gang or try something new as a spy amidst the political turmoil of Nottingham.

Get ready to meet Robin Hood, Little John, and Will, the Scarlet Blade in our first demo, featuring our Sherwood love interests!