"Somehow I feel...I'll have to go all the way up" well, let's just say you don't have to...but you can ;) Thanks for playing! It was fun watching you play our game and both to discover your game! 😄

I have patched a 1.1 version in the windows build! Lot's of small fixes and improvements, though the controls remain the same for now. Unfortunately, I couldn't make it work properly on web, it breaks the controls really bad for some reason :P And thank you for playing our game :)

Thanks for replying! I think you should wait for the patch tho, there's a bunch of stuff that I plan to fix and tweak, I believe I'll publish a patch today!

Thanks for sharing this torture with me!) A physics car racing game where the point is to destruct yourself in order to get to the destination.
Which sounds fun, you can either detach your parts to fly straight to the finish line or in other places keep them as objects to drive on and get over obstacles.

Makes sense right? Except it's not! After you destruct the parts of your car, they disappear. Unless you detach them in a VERY SPECIFIC place that the devs programmed it to not disappear.

But that just applies to the wheels, the car itself has entirely different behavior. The exploded car will disappear each time you explode your car again. Which just makes the entire play confusing.
I would guess it was made to decrease the chance of the player ruining his own game and not be able to progress at some point, which is understandable. You don't want the player to be stuck because of stacks of car parts on the map.

Nonetheless, it was still a bit frustrating) But fun anyway.
With all of that in mind, I managed to beat the game. I think we're even now ;)
Here's my gameplay, so you experience the struggle with me :D

Reply
Wowie Jam 3.0 community · Posted in Playing your games on a livestream (day 3 )
ToasterHead48 days ago

Getting Under It parody game ;) with trailer! - Rate Getting Under It by ToasterHead, DrR4V3N, Devarieuxmusic, TinyNerd, t i m o, Andu's Games for Wowie Jam 3.0 - itch.io

Very polished! I'm impressed! The visuals, the tutorial design are super clear and intuitive, and once the mechanic is introduced you good to go! Never seen such a mechanic in a platformer. Where you need to avoid spikes, but also get in touch with them once you set a checkpoint yourself (by throwing a checkpoint ball). For now, the levels are quite easy, but I'm sure that you could experiment and make crazy puzzles with it. Overall, a fun platformer with a twist ;)

Thanks for playing the game! You need to get height points (you can see them in the UI bar) and the more you get them the harder the ground breaks! But you also need to touch the ground itself. The game needs a bit more playtesting, for sure! :)

Hi! Thanks for the suggestions! We totally should make the cursor more visible. Glad you liked it! :D

Yep, there are a couple of trap spots that you get stuck in, sorry for that! Should've playtested the game more ☺️. But thanks for playing!

You can break the ground

Interesting to see a completed grinding game in a game jam. Can be a bit tedious, but overall it's well implemented. The mechanics are working, I haven't got stuck anywhere and the visual feedback is enough to let you know what you can do and what you can't. It was a pleasure to dig and find your way to the destination, and of course, collecting minerals and upgrading your ball. Which looks like a charged electronic ball from half-life 2. A nice 3d game submission!

QWOP on steroids! Really cool idea, and frustrating as always with the genre ;)
I'm not sure how to progress tho, I feelt pretty useless and powerless. I believe if the dummy would have much more powerful and higher force magnitude, with zero gravity, this game could be more chaotic and accessible! However, maybe I'm doing something wrong, but I'm not sure because the game has no tutorial or any tips. I like the idea so far, with trying to figure out the best combinations of state positions of the dummy to transition with, to try to move in a way. I would love to see a trailer so I can understand the game better and might even beat it ;)

I love the pixel style! The introduction of the mechanics and the story of the game are literally written into the dialogue, so it's impossible to miss it ;) The core base mechanic of this game is to avoid medkits that are objects laying on the ground, and collect fireballs that would fly towards you. So I thought it should be easy, but no! Your health is constantly decreasing and it takes a long time for the door to open to get to the next level. Also, the bullets don't fire at you but their angles are randomized so it's actually harder to predict their movement and gain health! At some point, I died, but then it turns out there are checkpoints in this game! I imagined medkits that suddenly grow monster legs and jump on you! I had fun, very funny and polished  game! :D

Finished the game in 4:39! So I can't say it was easy. I like the idea of the player having the goal of crushing the ship instead of the mainstream avoid obstacles and survive in space. There's not really a way to lose nor enemies oppose any threat, besides making your objective more challenging and time-consuming. I like that it's minimalistic in its game loop, and I certainly had fun! There's a lot of potential in terms of mechanics and features :)

Yeah, you can get used to it tho)) Thanks for playing!

I accidentally deleted my own reply comment, oops! I don't know how to get it back now D: Wait, so you beat the game? I mean yeah, the camera is stuck at the elevator instead of following the player. My reply was about asking for feedback I think. Anyways, thanks for playing the game!

This game is adorable. The allies are cute, as they try their best to follow you and help you out. The combat seems strange, I can just spam the space bar and the combo the sh*t out of the golden knights. However, it doesn't seem like the developer intended to put it this way? Not sure. The 2 total bosses were fun to defeat, even though they are not too tricky to defeat. Overall, cute little game!

I don't know if it's just me, but I had struggled with the controls. Especially when the ball is stuck at the corner and you try to pull it upwards, you just feel useless and powerless. I have played the browser version, anyhow, some playtesting is surely needed here. So, apart from that, I actually enjoyed the game. From the sound of the waterfall, the beautiful piano melody, and the sound of the balls hitting each other like pool balls, the sound is great! The visuals are minimalistic, but not poorly made. On the contrary, everything looks like it belongs there, the minimalistic look fits well with the sound and the feel of the game. I especially liked the part where you had initially just a couple of balls (clearly not enough of them), and as I desperately trying to pull up the big ball I figure out that: "Oh! I can activate more balls! it's much easier now, it makes sense!". I liked that part. Keep it up! ;D

Well done! Gotta say, the art is impressive. Had a bit of trouble having my slime speeding super fast, but then I realized I had 144Hz refresh rate :P You could use Time.deltaTime in order to fix the speed so the game works and feels the same no matter what your refresh rate is. Other than that, it's a fun little puzzle game, really cool!

This is just incredible! Amazing work done in 48 hours, watched GMTK stream ;) Would get it into NITROME

Exactly! XD we did not manage to finish everything on time

Was a bit tricky to get the mechanics, but it was a nice experience to play the game

I have no Idea what I have just played, but it looked dope!

Thanks for playing the game! We sure are planning on making upgrades in the future. The suggestions are interesting, making an indication for the enemy after you take the heart is something I haven't thought of but now I get why it important for the player to see it visually. I thought about shooting the heart from all 8 directions like shooting in binding of isaac, but I still want to make the ability to throw the heart with a minimal use of buttons, we'll polish it someday :)

We've actually finished the game now. All the bugs were fixed, and the game is pretty much playable and everything we wanted to implement is implemented! May you give the game a second try?) Would be interesting to see your gameplay again, but after the game is fixed :)

All of my previous paintings didn't work at all, and I was trying to be creative :P
The best I've got was 170$ so I just gave up and drew a bunch of penises and it worked XD Yeah, seems like you have made some progress and now its a nice playable game. Nice work.

Hey, quick question! If I change the game file (and lets suppose Mark sees my game), will Mark see my original one or the most current one? Because some people might change the file of their game and fix all the bugs and basically update their game.

Wait, the host of GMTK said he's gonna play the 100 best games. But of which criteria?

The controls are indeed frustrating. But I like the idea and the execution other than the controls is great!

I really like the concept and the art is amazing, but I find the controls too frustrating for me to continue playing. It seems to work as it should, but at the same time the hand seems to not respond correctly while near the body or after moving around. Other than that, you did a great job on the presentation of the game and idea that you had in mind. Great work guys!

Had a lot of fun playing the game! Quite hard to know what to do next, but my best tactic that shown maximum effeciency is - sniper, sniper, sniper, grenade, sniper (the sniper is just very overpowered). The 2 last ones I upgrade the most at the begining and the others later on. Good game!

OneBlock is a platformer with only one platform.
You can set the teleporters to teleport the platform around the place, making it a tricky puzzle-platformer game.
Its a bit hard to understand first time but you can give it a shot. 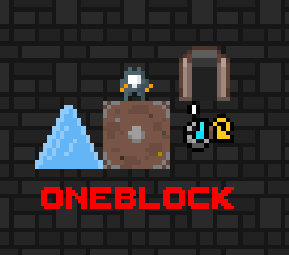 Thanks a lot for playing the game! You can watch my playthrough to see all the levels -

The video is edited and been shorted to 7 minutes instead of 40 minutes of playing the game :)
Reply