I've not come across this issue before and am looking into it. Does it not work at all or at specific points?

And if you load a save does it still not work?

There are tabs at the bottom for navigation. The one for Zane specifically is:

If you scroll to the bottom of the tab you can also see the amount of affection required for each end.

Sounds like your affection isn't high enough. Check out the affection part of the guide for the choices that raise affection or replay with the affectionate trait (gained from the going back to normal end).

Have you bought all of the items related to him and seen those scenes? Prior to the route split/school closing, most of Liam's scenes require that it be a weekend to trigger due to his work+Cody but after that the requirements should relax a bit.

Dreamscapes from 4-5 require that you are already on his route and have seen certain events beforehand.

You can check the guide for more concrete requirements.

That's a missable CG related to the spoiler character. You need to go the park when he's about 4-5 parts melted. There might be some Garret or Mick scenes that have higher priority but once you've done them, you should see his symbol there if the requirements are complete. (If you need further help, check out the guide for the only scene spoiler gets at the park)

That sounds like the sandcastle CG. To get it you must be raising the romance/melting level of both Liam and Mick and then meet both of them at the beach on a weekend before the route choice. A prerequisite is to have already met Mick at the beach.

Yep - 6th time, because you must have seen the grey dreamscape >4 (i.e 5) times at minimum during that playthrough first.

Congrats on getting the ending!

Liam is a bit harder because - due to his job + Cody he can only be found at certain places during the weekends during the day/afternoon before school closes.

Jealousy requires that they both have high romance/melting (and spoiler: will force you to choose between them and refreeze/lock the other).

Both of these scenes have a cut off of the day Osiria asks who you like so it's usually easier to trigger one chain of jealousy events at a time than try to raise the levels of the 3 boys simultaneously. (Also because watching one will  lock one of the guys and thus make another combination impossible)

I'm not actually sure how to start a DM on discord ^^'. So it might be better for you to contact me instead Corynth#1307

Oh wait - I think it's fixed now. Just took a while to show up for some reason. 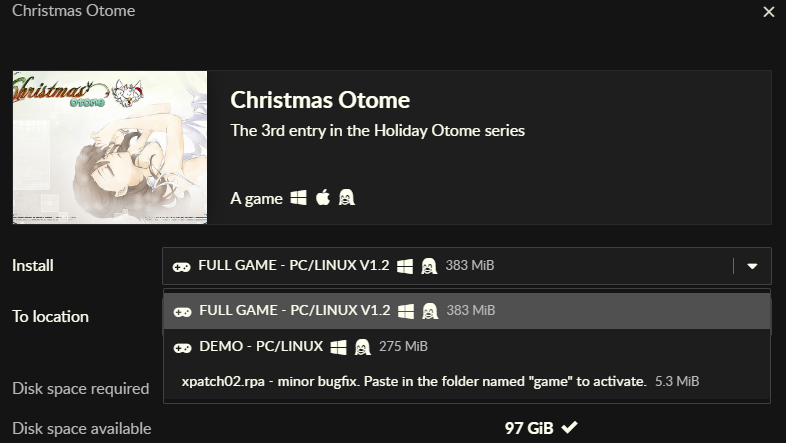 I see there's a drop down arrow there at install - can you see if there are any other options besides the demo? I'm not sure why, but it does show up if you click the gear/settings instead of instal 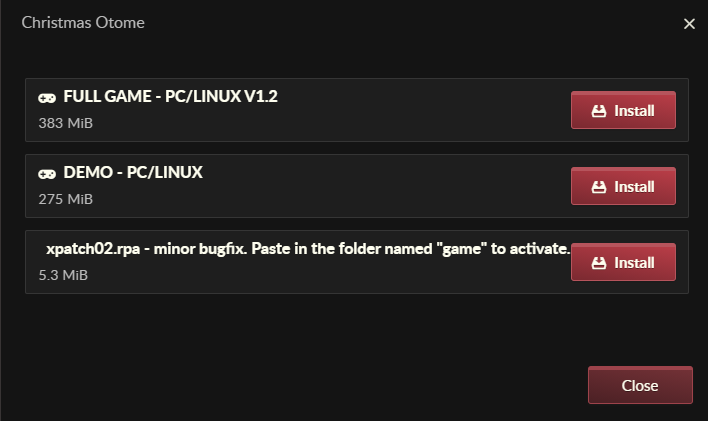 Yep - We release guides a week after the game releases to give players a chance to get a feel for the game without it first. And prevent certain things being spoiled right from the start :)

That is strange. When you open it and go to the preferences Menu -> Help -> About, what version does it say?

Guide will be released a week after the game's release. If you cannot wait, you can always join the discord for some tips from those who have completed it :)

Glad to hear you're enjoying it even with the bad end!

We're planning to release the guide in a week.

Sadly, Mira's LI cannot be chosen (Mira and her hubby are away on a second honeymoon for the entirety of CO lol). Mira's LI is also not explicitly stated so it can be whoever you wish.

Emma's will also not make an appearance but the choice is there to ensure that her sprite is consistent with the end of VO/the revelation in the VO Fan Book/extras if you chose the count.

This is exactly how we felt when we realised XD

Sorry for the late reply!

You just paste in inside the folder named "game" and it should kick in.

It's lovely to hear that you enjoyed the game!

Regarding the BGs, we do wish we could have been more consistent with them but at that time we were relying on what we could find freely available or as an asset pack which led to many differing BG sources. We would like to update them at some point, but we are prioritising making new games so there's no guarantee if or when that will be possible.

We're glad to hear that you enjoyed the game!

As for Mira's name we just thought it Cosgrove was pretty and had the requisite C to make Mira's initals MC (We've been theme naming the initial Main Characters as a reference to them being the MC lol).

We didn't make the connection to the actress ^^'. By the time it was brought to our attention it was already too late to change it.
So yeah, there's no inside joke. She just happens to have the same name.

We're glad you enjoyed them!

We're hoping to finish CO this year, but not 100% sure on that because it depends on how much time we both have. Fingers crossed though!

We do have plans for more games after Christmas Otome! We've got another game in this series to do, but before that we want to take some time and work on a darker sequel for Flying Lessons where they all grown up for a change of pace.

We're super slow so it'll probably be a long time before we have anything to show for them though.

This year kind of knocked us for a six.

Ah, okay. The missing Kiron CG (6th) is from his "Fallen Hero" end while the counterpart to the Daire CG  (Kiron's 7th CG) is from the "Things Left Unsaid" end.

The exact requirements for those ends can be find at this point of the guide:  https://docs.google.com/spreadsheets/d/1CjKGkKfTB3aXmScImrjptJ_K2RbyADv-1aB_B5uN...

Sorry, I'm not sure I understood the query. Did a CG unlock at the wrong time?

If possible, please provide additional information such as a screenshot and what steps were taken to encounter the issue? Also if you were using the patch or not?

I can provide you with the translation files needed but this might be better done via discord.

Regarding a translation - we have no plans personally but would encourage anyone that would like to make one!

Thank you for your kind words ^_^

Clicking on the other chibis on the top left should change which  CG gallery you're looking at :)

Hi! The green icons are additional emotes for Maia. They're more PC based to reflect the way she thinks. Like the loading one is because she's trying to process some info, error is because something doesn't make sense to her/crashes her brain, overheat is because it's embarrassing, that sorta thing.

This looks like it's being prevented from saving which could be an antivirus or permissions issue.

First try to launch the game directly as admin and not from the itch.io app and see if that helps.

If not, please see if any of the below are helpful to try and troubleshoot:

We'd like more information on this if possible, preferably in the lemmasoft thread https://lemmasoft.renai.us/forums/viewtopic.php?t=48083.
As Valentines Otome was made with RenPy, there may also be others there who can assist to find out what might have changed to cause the save system to stop working.

No worries - it's always nice to hear that people are still looking forward to it's release !

We're still working on it - we're just slow ^^; There's no need to worry about it being abandoned though!

It's highly recommended to play Halloween first as this game takes place after the events of that game and characters from there make appearances in this one.

As a result, there are some scenes and references that may not be as much fun/make as much sense if you were to play this one first.

The only Kaiser coat requirement is the first one. There is no second coat that you can make.

Waking Nightmare branches from the Best End so it has the exact same requirements but for the last choice choose to find Daire alone instead of confronting Kaiser.

The USB and charms have been mailed to you and should arrive in 10-20 working days.

Please let us know once you receive it.