Fixed another bug. If the game starts here for you then it should work properly now. 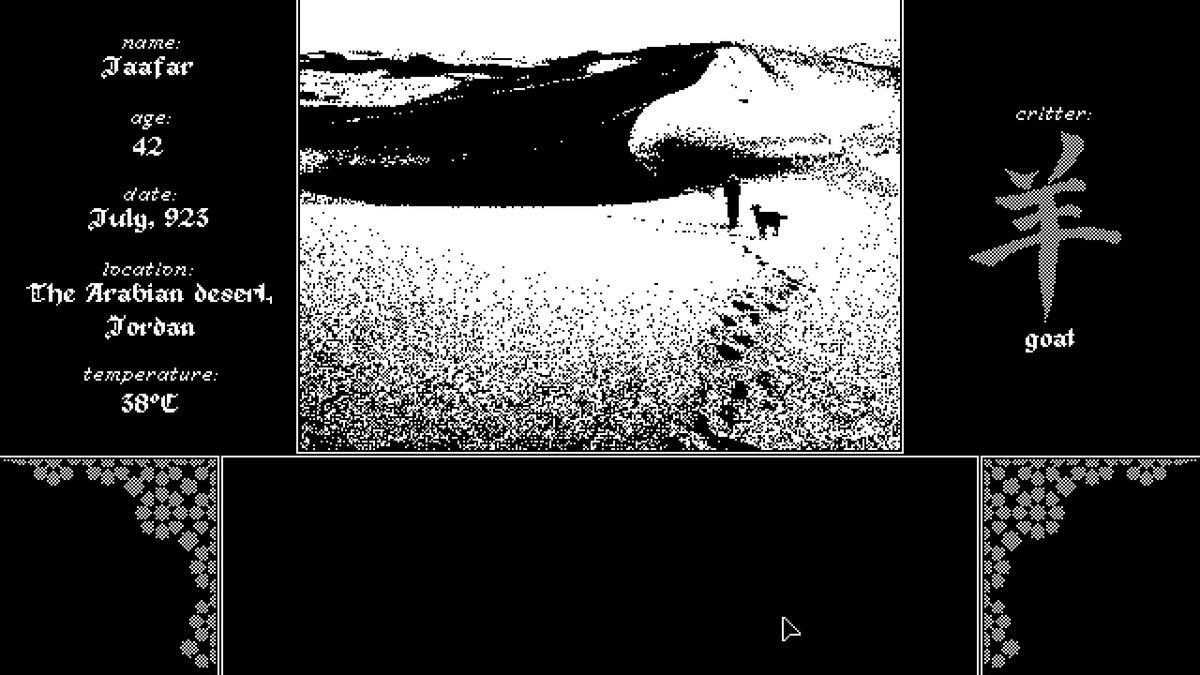 There was an issue with one of the endings ("Black pill" ending). If you've downloaded the game within the last hour you might have to download it again. Sorry for the inconvenience!

The Man in the Rug is taken from a prayer mat of mine as well, I thought the tree in the bottom with the branches looked a lot like a face. You can rest assured that I didn't mean any offense as I'm Muslim myself.

I added both versions now. Thanks for the heads-up!

I haven't tested the Linux/MacOS builds yet, but in the meantime I think Wine + Windows build should work

I wish I could tell you, but I'm thinking maybe keep it free on itch.io and paid on Steam for anyone who wants to support me.

Sonoshee and Roex hereby grant permission for the use of in-game video & audio for “Let’s Play”, “Preview”, “Review” and/or “Commentary”-style videos on Youtube, Twitch.tv and other video/streaming sites.

This includes ad-supported/monetized channels/videos. The creator of the video may use in-game audio & video for as many videos as desired.

Specific permission is required for any soundtrack use outside of captured gameplay.

Thank you for the heads up! In fact many other users have reported the same issues, and I will be looking into them tomorrow.
As for the Steam overlay problem, I'm afraid I can't do much about it :/ seems like a Unity issue.

Solved the fullscreen problem. The update will go live in an hour or so.

I noticed you in the leaderboards this morning, congrats on finishing the game (twice!). That's impressive.
Though I might reset the leaderboards on 15 January to time up with the Steam release, but I'm not sure yet. I hope you don't mind, otherwise let me know I can get you back in there.

Thank you for taking your time to write your opinion about the game. Though I can't reply to all your points, I still hear you loud and clear!

The point you mentioned about button-mashing and aircraft speed had polarizing opinions throughout development. For example at first the aircraft had an overheating mechanic that many disliked, so I had to come up with an incentive for the player to ease down shooting over time, that's when I thought of button-mashing + slowing down the aircraft while in fire mode.

The charge shot while holding down the fire button was in my to-do list as well, though out of laziness never got around implementing it.

Aircraft speed is super slow indeed, I realized that quite late into development. By then I couldn't increase it as that would entail redesigning many enemy-behaviors that rely on the player's speed (like the Ranger in Area 2, Bomber/Area 1, Crusher-doors/Area 4, and many others). Though in a way I'm glad I kept it this slow, you get used to it pretty fast and the gameplay feels tighter and more precise akin to that of Guxt, my main inspiration gameplay-wise.

The other shortcomings about bosses are absolutely true, I reckon most of them need tweaking, and I also find myself struggling with the 2nd phase of Boss 1 more than the 1st phase of Boss 5 for example. They're still challenging neverthless, so I think that's good enough for a perma-death shmup.

The achievement popup scare the heck out of me, they're kinda loud and spontaneous, but I think that adds up to the surprise of having unlocked an achievement :) I could fix the Detonating Shooter popup by making it trigger a little later on. I'll add it to my to-do list, eventually this could get fixed.

I'll look into those bugs right now. It's strange I can't seem to turn off fullscreen either when I tried it just now. Thanks for the heads-up! Will look into this now.

Loved every second! Would love to know more about Hell OS. Keep up!

Update: I just reduced the score bubbles' size and it's much better now; the score is readable and it doesn't obscure the view. Thanks to AWK and crabowitz for pointing out this issue.

[2/2]
I agree that that the game is frustrating. That jungle/sea level in particular feels the most frustrating imo because the foreground trees and the fast-scrolling background distract the player. And it's in no way a proper introduction to the game ( Which makes me think I shouldn't have put it in the demo). But I can guarantee once you get used to the movement speed of the aircraft it's much easier to dodge enemies and target your shots to perform direct fatal hits. And by the time you play the first levels you'll understand it's better to study your shots instead of keeping constant fire like in other shmups.

(Also there is no controller support yet. I'm surprised it worked at all)

Thanks for your points AWK. I appreciate the feedback.

So about the score bubbles, yesterday I made them render beneath the playfield and changed their color a little so they're less distracting. Now that you mention it they're super big for their purpose, I'm gonna try making them smaller now and see how that turns out.

Those arrows are supposed to show where the player is when it's vulnerable to make it easier to locate. But I noticed like you said it acts against that purpose. I might end up scratching it altogether, or making the arrows smaller and semi-transparent.

I didn't know you had your game in DD14 until I checked the submissions now.
This feels really good. The animations and particle effects make for a satisfying game feel. I know you describe it as multiplayer Downwell but this should be a game of its own.

I really want to see a singleplayer mode because not everyone has friends, you know. Maybe just a basic movement/jumping AI that shoots the player whenever they're in the enemy's line of sight, with random shooting delay ( so that it's fair).

Other than that I don't have much to nitpick about, the game feels very solid and responsive. Great job comrade! 👌

I think I probably shouldn't have put the 3rd level in the demo, or at least should have had a tutorial to explain the mechanics first. But the first 2 levels are less straining on the eye and will hopefully give a proper introduction to the game's mechanics.

Thanks for playing either ways!

@crabowitz
You're right about the score bubbles, I'm gonna make them render behind the playfield for a better visibility.
What do you mean by "full auto" and "sensory overload"?

This was an interesting read! The demo itself was a unique experience so reading about the game's origin makes me all the more excited about this project.
If you don't mind I would love to hear about your art workflow in one of the upcoming devlogs - what kind of material do you start with and how do you go about producing that unique aesthetic in Norco.

You can download it for free as of now

Thank you so much! really glad you loved it.

I'll definitely release it eventually so stick around until then mr. stek

Yes definitely. I wanted to add a Linux port for the demo but couldn't manage time to build/upload it. But it's a must in the final version.

Reply
Rym 9000 community · Posted in I like it!
Sonoshee3 years ago

Thank you for playing and for this insightful feedback! <3

I wish I had made the movement less slower from the beginning, now that I have 4 levels each having ~5 enemy-behaviors it's hard to reprogram all those enemies so as to be balanced with a faster/slower player. I'll definitely look into it though, maybe increasing speed a little won't introduce any issues.

Controller support is on my to-do list, didn't get around implementing it for this demo. But it's definitely a must!

I'm afraid I'm not hoping to add fullscreen support since the window's content has to be scaled roundly to preserve that retro look.
Though I'll make sure to provide an option menu from where you can resize the game's window ( for the demo you can press F1/2/3/4/ to change the resolution)

Thanks again for playing! Make sure to stick around while I'm finishing the game :D

Thanks for playing :D I made an update 2 days ago where the rotating enemy is easier ( the one that's causing you trouble)
I can't understand Spanish but I'm glad you enjoyed it.

My bad I didn't include contact information in the game's page.

Any updates on this? Can't run the program at all.