Hey, nice game here... I wish had more of this haha

Very pleasant workflow. Simple and straigth in the best style of "WYSIWYG".
In my opinion its perfect to test PixelArt skills on small gamejams. ;)
Would be interesting see a gamejam only for games made with this tool.

Also, I want to point out that will be great if you could enable touch controls. So we could upload on itch io as mobile friendly easily,

Give more information about what you looking for

Its a cool game, but as I said in playstore review: The game still have ALOT of space to polishments.

But its a pleasant game ;)

Yeah... apparently it was scam XD

Some mask options (Ninja, Knight etc...) would be cool 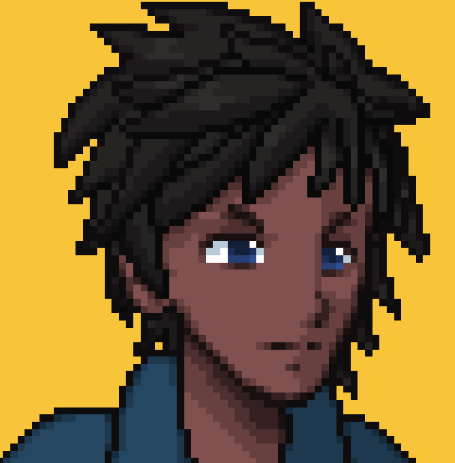 This is amazing. I'm love with the style haha :3

With a few improvements this would be really useful ;)

Hey OcO, how much would cost if I ask for cyberpunk enemies in 1 bit style? And, there is some way to talk with you on private?

Ps* I dont want exclusively so you could sell it as the others.

It feels like, a mix of your other games. The main character art based on Hinedere Beat + Samurai Jazz, the stages from Boxer + Hinedere, and the action from Samurai Jazz + Ninjahtic. I guess is that (?!)

The only thing that I didnt like is the fact that game "replace" the jump/boxer on the steam library. I would like to have both of them, or just jump/boxer and leave iaidoka on the options. But its okay; Alright, you did it. I wish I could die right now.

Wow, I have used this for so many years, did not expected to see it here. Thanks for everything anyway ♡

Hey, the game could be pretty cool if you polish a little more in the gameplay graphics. All the rest are great.

Wow, I confess, I though the game content a little disapointing, but just a little bit, not really bothers me at all.

Besides the fact this game is not "my type" and I just buy the game because I'm huge fan of you, and wanted complete my Blaze Epic collection haha

I'M NOT UNSATISFIED WITH THE PURCHASE.

Worth mention that I'm really surprise with that post and your "way" to deal with the situation. Just makes me like your work even more. And be sure I will be here waiting for news ^^

Ps (I will keep a backup with the actual version as a huge bonus by keeping tracking your works) :3

Hey man, I though this tileset great but really hard to identify everything, I'm using the screenshots as reference but still have many tiles which I can't identify how to use.

Can you provide some guide or more reference images to use this properly?

Anyway :3 I'm doing something with it, hope could show it soon

Reply
Adventuron Halloween Jam community · Replied to Stefan Vogt in Help me to get better ;)
Soso <32 years ago (1 edit)

(The game what I'm talking is from the past Adventuron gamejam, here: https://sommbra.itch.io/astronauturon ; Its a little interesting that Hibernated  and my previous game share a little of the same theme :P)

the Unhallowed link is also going to Hibernated*

Thanks for all the group ^^ and many thanks to the compliments.

If you intend play again someday the lake hint is: you will need work with two items to make something see you and get closer.

For the hole the hint is: you need use something which can shoot some light inside the hole

And for the lake: you will need work with two items to make something see you and get closer

And thanks for play my game ^^ I hope the hints helps

In my last game (Astronauturon) I believe that I haven't take enough feedbacks to improving my next one, so I'm doing this topic to take some more constructive feedbacks or suggestions.

I take the following feedback from Garry:

Instead of allowing N, S, E, W from every location, block off some of the exits so that it is more like a maze and you have to do some serious exploring to find the important locations. You can still keep the routes between the spaceship, house and mine fairly short so that you don't annoy the player.

But still, I had some compliments about the exploring feel of the map in the page of submission.
So I think that make a map which can be explore is a good thing and I wanted to try again that, at this time I will be careful and try made them less confusing/more easy to navigate.

From this and thinking about the Mushroom game(which was the winner), looks like the "find items" is a very funny feature in the games, like the players really like to play again and again till find all items.
I don't think I would repeat the method that I work with items in the Astrounauturon instead I have something more interesting in mind.

I already thanks who can help ^^

Damn, it wasnt happening in the debug --'

Reply
Trijam #38 A 3 hour game jam community · Posted in Suggest themes for the next jam!
Soso <32 years ago

You can count with me in the Halloween jam ;)

I has been very busy in this weekend, so I have to hurry with the game.

The last uptade was just 56 minutes before the submission close. XD

I made 90% of the changes that you point, somethings I can't change because it would affect other things. But 100% OF THE TEXTS that you send me was fixed.

There is an exit called "Exit" when you get to the end game, but it doesn't do anything.

I really don't undestand what you mean, here.

The end says "1 / 3 secrets found". Did I miss something or is that to be added later?

Yes, you missed. After the last update, was added a little more fun to the secrets :P

It doesn't appear that you can do anything with the fish.

Before the update you had take a photo of lake to take a secret. Now its something a little more complex.

You automatically take the capsule. It would be better if you had to manually take it.
"A Time Capsule Full Of Memories From The Past" should be "A Time Capsule". Provide the other info when you examine it.

It give me a lot of pain, but now its done ^^ the player has the freedom to do actions with the treasure.

There is no image for this location.

Sorry about that, I can't draw anything that I like to use here T_T

Let me ask something, you sometime was attacked by the creature randomly when are walking around? Because by everything you talk looks you solve everything without pass the 120 commands that you have before be attacked .-.

For last, A HUGE THANKS FOR YOUR ATTENTION GARRY, I really appreciate your dedication with the jam and with all the games on the jam ^^

Oh, im sorry, actually I put the match for USE SHIP  and not USE SPACESHIP.

try use LEAVE FOREST inside spaceship for end the game

You just need use the spaceship to leave the forest man ;)

(1) This is the actual map of the game, and yeah lets say theres a void at "Northeast".  Actually, I DO have plans to put some more content  around all the map (lets say, more items to find and not just at house, and more "strange" events like the creature event). But I didnt know if I really was "getting into the genre" (text adventure). I felt little lost and decide to not go further and add more content. Actually I get back and undone some puzzles (like the treasure would have a key inside the hole which would be necessary to open the treasure at the end, ).

Thanks for the compliments about the forest, I has to do everything very carefully to not connect two similar backgrounds. The only "fail" is with lake and north and south forest (I made a mistake and the tree at lake doenst "move" when goes north/south... is exactly the same)

(3) HAHA SORRY FOR THAT --' I will review and pay more attention on the texts.

5 endings, 1 true ending when you complete your mission and 4 game overs when you dies.

I dont know if the game is too much hard or no. But theres a downloadable document with a guide to finish the game.

And I also publish the entire code of game, I have pretty sure it can be much more optimized but I wanted to keep most simple for me undestand better.

Reply
Adventuron CaveJam community · Replied to 8bitAG in How do you include a string variable in text?
Soso <32 years ago

god lord... I had tried everything dont know how i never tested this way -,-

Many Thanks AG o/