Voice of the forest
We are a community. We need each other. And together, we grow.
plamusse42
Simulation
Play in browser
Simple Shapes
Simple vector shapes
softsound
Fortune Teller Magic Card
softsound
Hexagons Patterns!
Looking for a seamless pattern?
softsound
Simple Skybox Template LDR 2k 4k
A quick template for skyboxes made in photoshop.
softsound
Quibble
Care for a cuddle pet. Pet it, play with it, take it outside.
josefnpat
The Maze
Explore a procedurally generated maze with Leap Motion
softsound

Yeah, I agree they could improve the level design. Blocked off stuff, added a little side mystery and called it good. This is a small indie team though so I'm not expecting too much out of them but I'm sure they will be happy with your feedback.

Yeah, you pretty much have to follow the story and enter the Inn I believe to be able to enter the rest of the houses later.

I love this so much! The descriptions are so cute and well thought out and the art is fantastic! ❤️

This is such an adorable little zelda like game. I've really been enjoying it, the art is perfect, gameplay is great and I like the music, great job! It's not clear to me how save works but I'll assume it's automatic. :<

edit: Yes save is auto, it was on the main menu and missed it earlier.

Wow this looks really cool! Can't wait to try it out later!

I apologize I think I had the download button turned off earlier and fixed it. Let me know if you have any trouble.

Well, this is what an hour gets you lol.

A lot of motion graphics now use lottie and Haiku Animator, it would be really cool if you could figure out how to use the open source version with this https://github.com/HaikuTeam/core

Might not be worth the trouble but thought I'd try.

Thanks for the quick response, look forward to future updates.

Also great work, I was looking for a tool like this, I have a lot of sprites that needed something eye catching (I'm updating a sci-fi space adventure, needed a way to show damage on ships) and this can quickly add that without me manually creating the spritesheets or asking my programmer to spend time creating these effects in game.

I look forward to any updates and am a big fan of all your tools, keep it up, I'm sure you'll have a full suite soon. :)

They get lost along all the files. Also would be nice if I could save the name to something. It currently saves to result [some number].

Reply
Pixel Fx Designer community · Posted in Not clear UI on if I can import sprites on demo?
softsound2 years ago (1 edit)

Not sure if this on purpose. You documentation is similar though so this might be the look you are going for... I'm using firefox & windows 10 if it matters. Considering just about everything else seems lined up it just seems out of place to me.

Reply
Pixel Fx Designer community · Created a new topic Not clear UI on if I can import sprites on demo?
softsound2 years ago

Actually the whole sprite section is not very clear on how to use.

1) Sprite loading-
Please change the bar used to a load sprite from Sprite None to Load Sprite and then, once loaded, show the name of the sprite in that box. Currently it shows the first value inputted which is not very useful to most people I believe.

When you click on the sprite bar that says none it will pop and say "Input frame width" etc.

Considering this is made in Gamemaker couldn't you load in the texture/image and try something like sprite_get_width(index); or something like 1/texture_get_texel_width()? It's been a long time since I've worked on a gamemaker project...

It would also be nice if I could adjust the size of that image later without reimporting the sprite.

Although looking at your online documentation it looks like that might be some sort of style you are going for... I'm not sure.

3) When you click on one of the categories it should auto select the 1st sub category.

For example when you select Basic then Ding Bang should show as selected. I personally don't think the association is very clear.

It's a little confusing to deal with the sprite selection because it doesn't show what I selected and I had to figure out there were main categorizes and subcategories. Also it's not clear if the sprite I loaded can be saved into a category.

4) It would be really nice if I could store my own sprites in a separate category. Gamemaker once made it easy to create a directory and store saved assets and reload them but I'm not sure if they have removed those features since I last used it. It's a request, but a minor one.

5) Oh and I think ran into an issue using the timeline play button below and the regular play button.

Earlier I loaded a sprite with dimensions bigger than the sprite so that might have caused the problem, but I switched to some ding bat before I hit play. I'm not sure which ding bat, as it's not clear what you clicked on since there is no highlighting or selector. 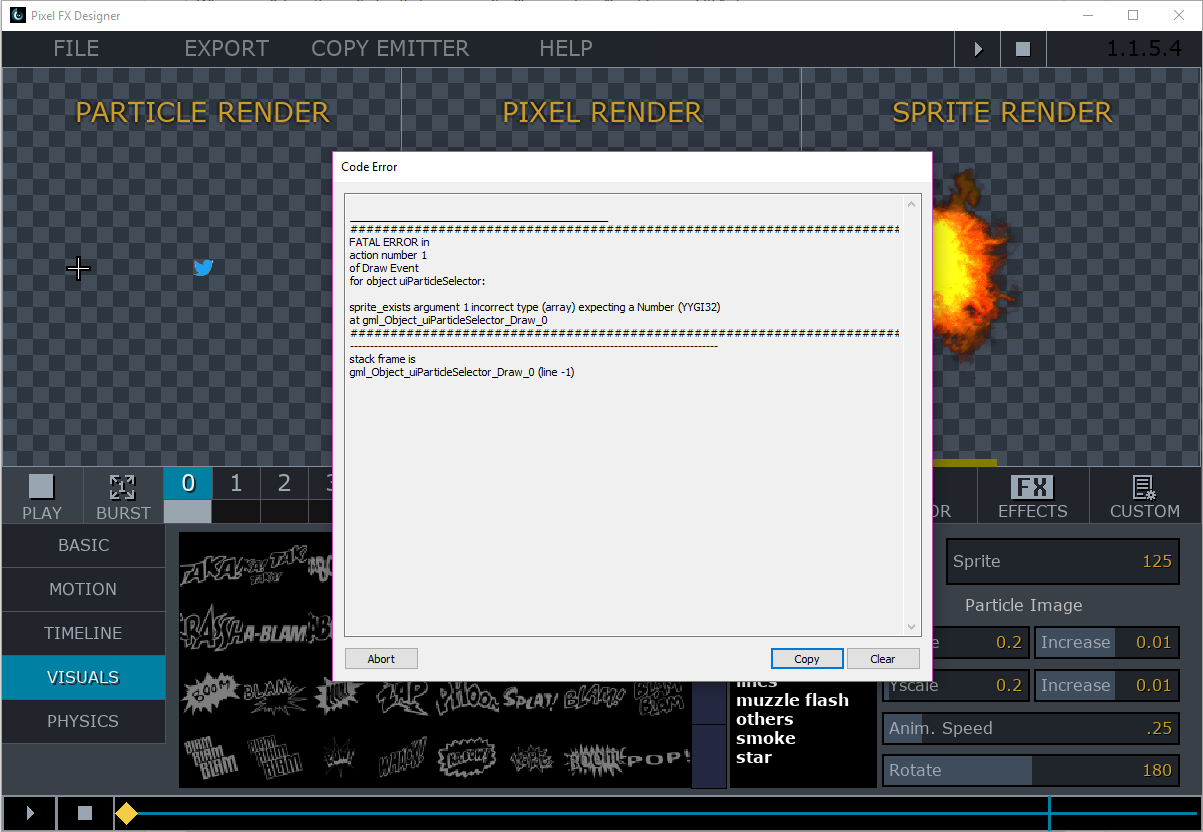 Reply
mMcFabs's Texture to SkyBox Converter community · Created a new topic I really like this tool, but 4096 breaks pretty often.
softsound3 years ago

I know it's capped at 4096 but more often then not it breaks at the cap, I'm never quite sure when it will work. But I've really enjoyed this tool and wish I could see maybe a visual line on the tiny preview where it started the warping, and I wish I could adjust that after I've loaded the image. Anyway, super cool, thank you.

Reply
Cosmic Everyday community · Posted in Hello, I've been having an issue exporting a PDF from my card
softsound3 years ago

I'm on windows 10, and have 8 gb ram and run a SSD drive, uh, I'm using an nvidia geforce graphics card but I would not imagine these things changing anything though... I tried changing folders and changing the name of the file, I'm defaulted to admin so it should be able to write just fine but nothing. I get no errors, but also no file, I'm able to click save but I just don't end up with a pdf. My folder is always empty, I keep the folder on the desktop and I never seen able to get a pdf, I've tried putting it in other folders on the desktop.
I'm not sure if having photos or links on the card I'm trying to convert to pdf is the problem.
It sounds like this feature should work though, so I don't really what else could be the problem. I could take screenshots or make a video if it helped?

Reply
Cosmic Everyday community · Posted in Your ideas and suggestions :)
softsound3 years ago

1. I request making this FOSS or open source so others can continue to work on it when you get busy, this is excellent software.

Or maybe start a Pateron to help support development?

I know it's in progress but...
2. It would be nice if on the calendar if I clicked on the card shown on the date, it would jump to the card.
Also could be useful to write notes on the calendar or create a card from the calendar view  or connect it to google calendar.

2.5 Combining the time tracker with card tasks would be really cool, especially if it showed the total time spent on a card in the calendar.

3. Your card to PDF feature sounds really cool, but it's not working for me, if there was anyway to preview your pdf that would be cool too.

4. It would be cool if I could import an image into the sketcher, or change the background to like a grid or something.

5. I'm not exactly sure what jumbles are for, they seem to have a lot less features then regular cards. What does the "here" and "there" button do? They flash in and out when creating a jumble. Could you maybe have jumbles set up like cards so I can stick images and stuff in there, currently the only thing I can do is write down text, with images I could make a little dreamboard/moodboard/storyboard or something ;3

6. I agree above with allowing us more icons, or maybe going a step behind and allowing us to mod the theme or colors even though I love the current setup, I do enjoy fiddling with themes.

Anyway I wanted to thank you so much for creating this tool, it's beautiful, easy to use and has more features then I expected! Keep working on pretty please!


Reply
Cosmic Everyday community · Created a new topic Hello, I've been having an issue exporting a PDF from my card
softsound3 years ago

I'm able to open it, name,  and hit save and  it looks like it should export to the desktop but I don't seem able to find the file.

I just wanted to confirm that feature was working, I was hoping to write notes and add images to the card then export everything  to PDF and maybe save myself writing a report later.


Anyway...
I also must say I love the design and color scheme for this software.
This is like the ideal program, and I really hope you continue to work on it! If you can't find the time perhaps you could consider making it FOSS and letting others continue to build on it? If you start a Pateron to help support this I will gladly join and give a few bucks every month to help with development

Did that discord server ever happen, if so how do I find it?

Reply
LÖVE Jam community · Replied to trelemar in Any Artist want to collaborate with me for the jam?
softsound4 years ago (2 edits)

Still trying to get back to ya.

Reply
LÖVE Jam community · Posted in Any Artist want to collaborate with me for the jam?
softsound4 years ago

Hi, I'm hoping to work on art again so I'd be happy to join your jam. I have a few samples of things from here and there on my site. I need to get around to organzing it at some point but if you need an artist and can't find anyone I'm happy to help. Here are samples of my work

I enjoyed the concept, good music and art. But I wish I could do to more with my extra rations!