I'll add a couple more for you!

If you are in North America, your best option would be from Knave of Cups. They are selling physical copies, while they last, starting tomorrow.  Check out the website here: https://knaveofcups.com/

If you are in the rest of the world, I had a print on demand option being setup with DriveThruRPG. Waiting for my final proofs before I can launch that.

An excellent evolution of the system introduced in Ronin. Hope to see official expansions to introduce even more interactions across the galaxy. 5/5 stars.

1 - I believe you could use it for any variation of a LUMEN RPG if you switched over the encounters. I use the specific ones for LIGHT. Feel free to edit the document as you see fit. I'll even publish an editable format today for you and update the license to be CC BY 4.

2 - A solo strike is 1 person by default. To play with more players in a strike, multiply the number of enemies by the number of players. This provides enough things for everyone to destroy during the strike.

Let me know if you have any additional questions.

Thanks for the request! I will try to do a epub version export over the next day for you. I'll post an update at that time, so watch your email for anything popping up about Wandering Dreams.

I'm looking into print on demand with DriveThru RPG as I would like to avoid Amazon for PoD services. Please give me a few days to look into this and I'll get back to you.

You got it right. You would combine those two locations into one bigger version. There is no rules about needing to draw another card or switch suits for subsequent duplicate draws.

Thank you for the review! I'm elated to hear that my little game has brought you so much delight through worldbuilding to you. It is always amazing to hear feedback from players on how the game worked for them, and even if it didn't!

I hope you continue to enjoy wandering through the dreams of your world.

Demo version is the old 1.0  copy of the game. The full version has updated art, layout, and fixes a few of the rules wording.

There is not that I know of. I can provide the original texts to you, if that helps with translating?

Feel free to print the document anyway you want. If the company has concerns, forward them to me at sleepysasquatchgames@gmail.com and I'll provide permission!

No problem! Send me an email, sleepysasquatchgames@gmail.com, and I'll provide a code to redeem.

Thanks for the request! I've done an errata/FAQ for my other game, GLIDE, and should really do one for Courier. I will add that to my list and have one by the end of this month.

As for your question... This is actually an error. It should read 'connected'. Thanks for pointing this out!

Hope you get around to playing one day. I appreciate your support and feedback!

Absolutely! I will include some information on the main page for the license, including branding and what is considered fair-game for third-party creations. I'm fine with creations being sold by the creator, as long as they include a "compatible with GLIDE" declaration and the logo (as mentioned). Will need to do a bit more research as to how other print games handle this, so give me a few days before the update is available.

If you have more questions, please send me an email at sleepysasquatchgames@gmail.com, as it's easier to correspond in long-form.

Hey! I just got around to sending out emails to those who ordered physical copies this week. Sorry for the delay. They will be shipped out as soon as today (November 11 - 2022).

I will add that as soon as possible. It may take a few days for DriveThruRPG to approve the upload, so keep and eye out for the update email.

Hey! The starting Speed is 1. You can find that info in the FAQ/Errata v1.0, which is listed in the "demo/free files" section of the GLIDE page.

Level 1 upgrades are the first upgrade to your starting Stats. Hope that clears things up for you.

Nope! Quest items are ignored unless you have an active quest. Assume that you don't know what you need to find until you take on a quest.

There is not any videos, that I can find. If you have a recommendation of someone you'd like to see play it, please let me know and I'll reach out to them.

I have a few copies going up today. The price will be $25 USD, shipping included.

Looks really nice! Makes me want to do a hardcover project in the future...

You're welcome. The "Low Ink Version" zip contains both spreads and pages, depending on your printing preference.

Thanks for requesting this! I will upload a low-ink version within the next 12 hours, with the inside covers removed and some adjustments to the contrast levels for the covers. That should help cut down on the ink budget.

Appreciate the kind words. I hope you enjoy playing GLIDE!

Thanks for letting me know, William! I will upload a new version ASAP.

Yep! Carry out all the other encounters and re-draw any combat ones.

Glad to hear you are enjoying it so far!

When moving through multiple cells, you should explore both. If you get a combat on the first cell, and then another on the second, third, etc., skip the additional combats and re-draw the location until it's not a combat location. This was a gotcha moment in playtest, and often lead to players being defeated, which is not always fun.

Let me know if you have any other questions.

"Street Ruler"
There is a free version available for personal usage that you can find on multiple font websites.

Please send me a picture when you have it finished! I would love to see a hardcover copy.

Thank you for the kind words. I am very happy to hear that you enjoyed the game so much!

Great idea! The core design was to create a power fantasy, after a while, for the player essentially making some encounters a complete mess for the NPCs. It felt a nice balance with the beginning of the game where you feel endangered by many encounters.

Great question. 10+ cells is really too far from the center, if counting directly from the center. The idea was counting steps from the location you take the quest, so moving 1 hex was 1 cell, 2 hexes would be 2, and so on. Once you reached 10, you could place the new location, or deliver the quest. Sorry that it wasn't very clear!

I will provide an additional maps in the downloads for more options and a larger overall play area.

I enjoyed your video a lot. You mentioned it was a "perfect starting point for solo role-playing games", which is interesting to hear. I put a lot of different systems into play with Courier, and honestly though it might be overwhelming for newcomers. I'm a big appreciator of "roll-and-write" games that provide you a world to explore beyond just the title it belonged to, and tried to emulate that feeling in Courier's design. Glad you saw the potential there!

The faction system was a bit of a letdown for myself as I really wanted to do more. Your solution of a "tension system" was really cool. I will keep that idea in mind for future games and any potential expansions to Courier. It easily emulates the control shift of factions that I really was aiming for but didn't achieve and you explain in in such simplicity that I'm sold on it!

Very happy that you could homebrew some rules to keep things going smoothly and resolve any logic issues, such as 2 trading posts directly beside each other counting as a single location, so that you can't just go between them and make a fortune in a small amount of time.

Appreciate all your kind words and feedback.

Thanks for the feedback! I don't have any immediate plans for an expansion as people would likely want a print run and the game launched over a year ago, so the excitement for it is likely very low.

The physical copy looks identical to the digital. I've attached an image for your reference (all the extra stuff is included, minus the meeple): 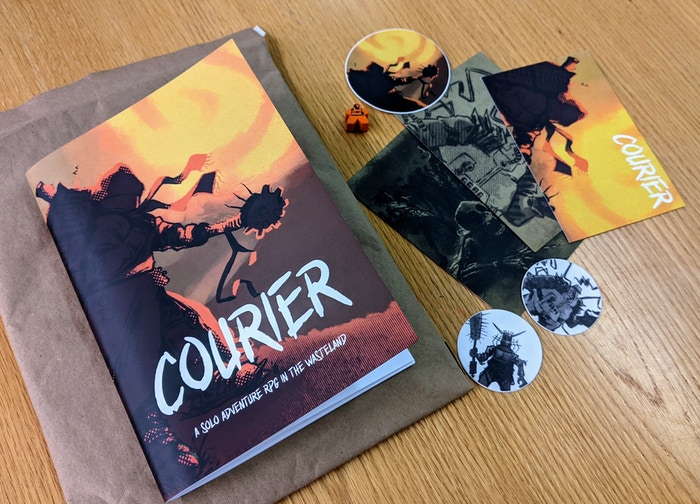 If you are interested in a physical copy, please contact me at sleepysasquatchgames@gmail.com and I'll arrange a discount if you already purchased a digital copy!

Correct. You should just re-roll for another Faction in that space.

There are Raider Camps as locations which can be discovered, and they will turn all adjacent combat encounters to be Raiders. Those are the only ways to add Raider locations to the map.

An amazing accomplishment by all parties involved. This game offers a world for you to explore, interact with, and grow. This is an essentially game for those looking to get into journaling games, or to expand their existing library. Thank you for creating this!

Thanks for the questions. Combat should not be possible in a faction location unless it is the faction that that location belongs to. This is a problem I've been asked about before and need to include in the errata. You could treat this as a one-off combat encounter as well, your choice. It should be assumed that each hex is larger than just the location inside, so encountering Raiders is highly possible as they would be out-and-about doing their thing.

As the game stands, Raiders cannot take over faction locations. There are some unique rules in the game that will change faction ownership but never for the Raiders. It is briefly mentioned, in my scrapped ideas section of the game, that I wanted to include Raiders moving across the map and taking over locations but didn't include it.

Every time I revisit Courier I see another issue that I wish I could go back and resolve for the printed copies. :)

As always, let me know if you have any more questions.

Thank you for taking the time to play and review it! I don't know any Spanish, sorry, but I appreciate it nonetheless.