Since there aren't any reviews here: Played on Steam, it's a very cute game that gets darker pretty fast. The plot, while I like it, does come off kind of ham-fisted at times, the villains are pretty one-dimensional and are introduced too late into the game cycle to be given any proper depth. But if you're looking for a futuristic enby life sim then this is great.

It's neither, you have a slider that you can change at any time to pick male, female, or anywhere in between.

I'm curious, have you played World of Horror? Because your game seems to have started development before World of Horror came out, but the two games feel extremely similar in terms of gameplay and theming

It's not quite as brutal as this one, things don't kill you in 3 hits and the party members you get actually don't suck

Have you played his other game No Delivery? It's so good

The difference is that Russia is raping and murdering women and children, attacking hospitals and schools, and committing war crimes left and right.

There is absolutely a valid reason to form an alliance to defend yourselves against that kind of scum.

Actually terrible. Started game, there are missing textures, the crouch button literally doesn't work, the swinging of the pipe is extremely inaccurate, and you get a key that seems to do nothing and there's no door to use it on. You have a tunnel, a useless side room with a couple shelves and barrels, a save room, and a storage room (of which both the floor and ceiling texture are missing) with a body in the middle. As far as I can tell there is no way to progress.

This was not worth the bundle price let alone 3.99

When you look at the album of pictures after the game ends is there something special about the extra pictures? Or is that just there to show off ones you liked

It's just a scavenger hunt in Unity House. You pick up items and bring them to the garage. 3 items finishes one round and it takes like 30 seconds. That's the extent of the game.

When you go into the lodge there's no way past the guy in there though.
Also, there is a softlock in that level. If you go to the back of the lodge and try to jump behind it, it will let you but then you cannot move or jump back out.

"Who wrote the letters that guide you? What is the nature of this surreal, enchanted universe? And why were you chosen to take this journey?"

Literally not a single one of these is answered in the game.

The game controls fine, and conceptually it's decent. But the execution is severely lacking. The game is about 20 minutes long, at a $4 price point. It should really be around an hour.

And most of the dialogue is pretentious either "The only real art is what fits into my definition of art" and babby's first Psychology 101 class.

I like the game itself a lot, but the writing choices were not great imo.

Reply
Bonbon community · Created a new topic Probably far too late for this to be fixed, but bug found
sinascendant203 days ago

Not sure if this has been brought up at some point, but during the final bedroom scene, when you go towards the door and it slams shut, if you are carrying an item, it can block the door from closing and thus bar the game from progressing any further.

Luckily, if you chuck an item at the door a few times, it will push the door closed and trigger the cutscene, but the trigger should really be tied to the player approaching the door rather than the door itself shutting.

Probably, but unfortunately that replaces the actual driver for it and breaks PnP functionality for the controller otherwise, and it works fine on Steam as is so I'd rather not break that functionality. Thanks for the suggestion though!

Oddly enough, Lake Ophelia does actually recognize the Dualsense being plugged in, but all it does is permanently put me into the "casting" pose

Unfortunately "Full controller support" doesn't seem to include PS5 controller sadly. Kind of disappointed, keyboard for me it is.

Yes, Aike, I'm aware. That has literally nothing to do with the issue I was experiencing. Thanks though.

Well, it seems to have fixed itself overnight and I was now able to download it, so I'm not sure what caused it. Maybe itch was just overloaded.

But I'm adding a screenshot of the page I was on, basically when I was trying to download it yesterday the dropdown was just blank, I didn't have that issue for any of the other couple dozen in the bundle that I downloaded. Thanks for getting back with me though! 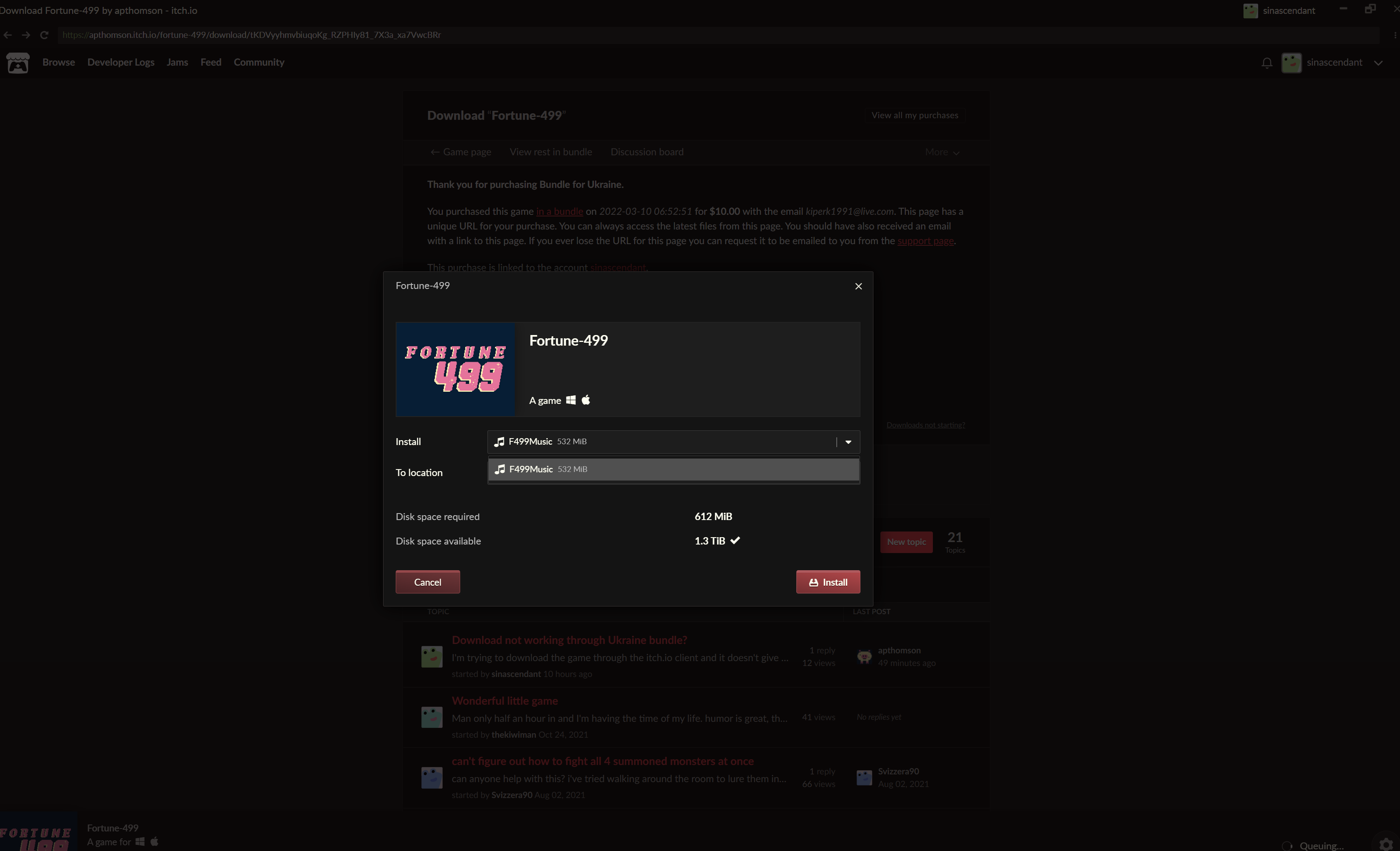 I'm trying to download the game through the itch.io client and it doesn't give me any option to select a file to download.

Does it always have that mirroring effect on the trips? Because honestly that kind of ruins the experience for me, it turns what would be a neat exploration into confusing nonsense

Pretty decent game, but the absolute worst "sailor" accent I have ever heard lmao

I think you missed the mark there.

It's pretty obvious that the dad killed himself, he's the skeleton in the closet. So you, the main character, as the dad, are a ghost reliving his regrets.

Not sure what resolution it's running at but if it's at Native I'm running in 4k.

Had a weird bug where, after alt+Tabbing out, it limited my turn movement to exactly 450 degrees (as in I could only turn around 1 1/4 times and then hit an invisible wall).

EDIT: It appears to be consistently replicable by talking to any NPC. I think it must be unlocking my mouse from the game screen every time I click a dialogue option. Clicking anywhere in the screen brings it back into focus and solves the issue.

Pretty good, but like a lot of games on here lately, extremely dark with no brightness slider or flashlight, so it was almost impossible for me to actually see anything

Very hard to play, there is no flashlight and no brightness slider so there are many areas that I literally cannot see whatsoever.

Also triggers SteamVR to start on boot for some reason

EDIT: Assuming you used Unreal Engine for this, you can stop the SteamVR prompt from showing to users with this

ALso, devs, is the email on the poster in the bathroom a legitimate easter egg email? Or would I just get some rando if I email it?

EDIT: It is in fact an easter egg email so that's neat : )

Literally unplayable for me. The lack of a brightness slider means that I can't see anything whatsoever, I get about 5 feet of visibility down the paths.

"lock all the doors"

immediately opens the door instead of locking it

Agreed. The hallucinating because of PTSD was fine, the random generic monster was silly and unnecessary,

Okay, so I played this on Switch, and these are my thoughts:

Positives:
It is aesthetically cute.
The music is pretty good.
There are some funny bits to the dialogue.

Negatives:
The combat is... not good, honestly. It's mainly just "whack an enemy from a very short distance" or for bosses "kick bomb into boss". There is no reason to ever actually fight a boss because 3-4 bombs defeats every boss in the game, and getting close enough to hit him with melee almost guarantees you take damage.

The game is insanely easy on its default settings, and provides options in the settings for increased damage and even godmode. If the story had been compelling enough this would make sense; but as it is, it makes an already easy game trivial.

The dialogue and story fall flat pretty often. Having Turnip Boy be a silent protagonist is a big part of this, I think. Almost none of the other characters interact with each other at all, so most of the game feels like you're just having text directed at you, and the "funny" parts don't seem to know what they're going for; a game where the central idea is tax evasion is obviously targeted at adults, but a lot of the jokes wouldn't even be funny to a kid.

The biggest issue: the length. To 100% the game, on my first playthrough, knowing nothing about the game, took me an hour 50. And about half of that was running back and forth to do sidequests. There's just no content. At a $15 price point, I'd expect about 3-4 hours, reasonably; or an extremely polished and witty gem. I got neither.

The only official is the Mayor, and he's mafia

I missed my train and couldn't talk to spooky ghost friend

the cat was pretty cool though so 5/7

Weird random bug: Both this game and Frontier Diver spin the camera wildly in an upper-left direction while I have my Dualshock 4 plugged in.

The Dualshock 4 has no stick drift issues and was sitting face up on my desk completely untouched at the time.

Well yeah, I did move onto the other parts and each of them was a good 5-7 minutes worth of content. Just feels weird

Late to the party, but I can't play this. I go out into the graveyard, turn around, go back in, everything turns red and white, and the game crashes.

There doesn't seem to be anything to do in the other room so I don't know what's going on. That's not what's supposed to happen right?

Literally can't see anything because there's no brightness slider and the flashlight lights up a tiny circle, directly in front of you. There NEEDS to be a brightness slider, the screenshots on the page here are way brighter than anything I could see ingame

Also, the game completely froze when I tried to activate the fuse box 3 minutes in.

First half of the game was great. Second half is not nearly as good. Issues I noticed:

Yeah I'm sorry man, I don't want to be a dick about it or anything, I just felt like there wasn't enough there.

Either shorten the distance between the beacons, increase movement speed, or have something happen in between them;

Have some sort of additional exposition, maybe in the form of notes or something at each beacon or at spots halfway between them

Some sort of scenery, like the little area at the beginning with the rusted out bus and the other decorations was interesting, so was the crashed plane, but then it kind of stopped.

It doesn't have to be huge changes just something more than "go here touch this". You have a solid base, you just need to expand on it